Get Girls To Sleep With You Using Attraction Triggers

A lot of you guys are telling me, “okay Jesse this is great stuff, but what if I don’t have a girl already.  I need to be able to meet girls all on my own before I can start adding value to their lives.”

Attraction Triggers are those things that just SNAP, generate instantaneous, blind attraction.  An attraction trigger goes off and your brain turns off and it’s just instant attraction, damn everything else.

For example, some guys just loooove Blondes.  They see a Blonde girl and automatically they are attracted, it doesn’t even matter what the Blonde girl looks like, it’s just a gut reaction for attraction.

So let’s take Joe.  Joe has an Attraction Trigger for Blonde girls.  He sees a Blonde girl and his thinking brain just turns off and he’s in love.

And maybe this same guy Joe who loves Blonde girls, also goes wide-eyed when he sees big breasts.  You know the kind of woman that just has those big, juicy, bouncy, perky breasts, like Lucy Pinder or Michelle Marsh.

So he sees a girl with a tight waist and big breasts, and he’s like Wow!.  His heads turns, its automatic attraction, doesn’t even anything else.  Doesn’t matter what the girl looks like, doesn’t matter that she could be a basket case or drama queen or no personality.  Doesn’t matter if she’s Blonde or not.  No, his eyes just go wide and his brain just turns off because of her breasts.  So big breasts say are a second Attraction Trigger for Joe.

But… and oh my girl… this Blonde Girl also has… big breasts.  This is an Blonde with big breasts.  She’s firing off TWO of Joe’s Attraction Triggers at once, in combination.

So how do you think Joe is feeling?  TWO of his Attraction Triggers are firing off at once.  His jaw is on the floor.  He’s about to shit his pants.  Hell it doesn’t matter if this Blonde with the big tits has crooked yellow teeth, has no personality, has funny looking legs, or is dumb as a brick.  Joe wants to meet this girl, because two of his Attraction Triggers firing, which means all reason goes out the window.

Now here’s the thing.  Women too, have attraction triggers.  Women will see a guy or experience a guy with a particular trait, that will turn off her thinking, rational brain, and just be instantly and madly attracted to the guy.

So here’s one of the key secrets to attracting women, before you even ever open your mouth with that pickup line—and that is, you want to be hitting as many universal attraction triggers for women as you reasonable can.

So that when you walk into that party situation, you grab a majority of the women’s attention just because it’s as if you’re the girl with the big boobs and the nice smile.

So that’s one of the first lessons – using Attraction Triggers so that you can be hitting off at least one or two or three attraction triggers in combination for any given girl… and have the girls madly attracted before you even open your mouth. 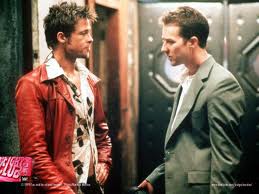 Real quick here, take a look at the photo of Brad Pitt and Edward Norton side by side in a scene from the movie Fight Club.

Can you notice what is the core difference or differences between them, what is it about Brad, besides him being a famous celebrity, that would fire off Attraction Triggers in a woman, as compared here to Edward Norton on the right? 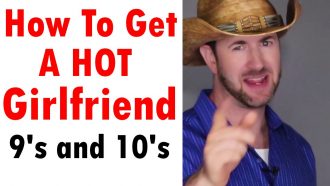 How Money Attracts Girls – What They’re Not Telling You