First, watch the video below of Han Solo’s pickup.

A big question I get from guys who want to be getting laid is, “Jesse, how do I get passed a woman’s bitch shield”?

Well, let’s take a look at Han here. When Leia puts up her “bitch shield” when she tells Han, “Would you please stop calling me that?” most guys would already be slinking away, feeling rejected. :ohmy

Our man Han doesn’t though. He just rolls with it, ignoring her tone and instead setting his own. 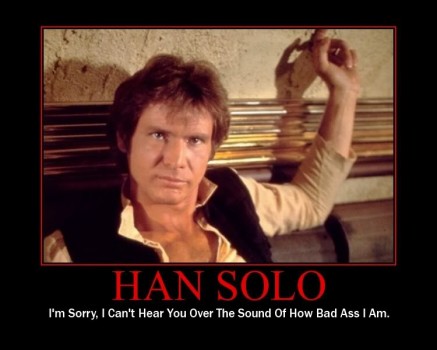 Han doesn’t get pissed off or slink away, not at all. He persists, and just rolls with it. “I do, I really do. You could be a little nicer, though,” he tells her as he moves in closer.

He takes her hand. You see, he moves forward despite getting “blown out”. And he’s not fighting against her. Her negative attitude or “bitch shield” isn’t even registering in his reality.

Leia’s blowout attempt #3: Leia says to Han, “Occasionally… when you aren’t acting like a scoundrel.”

With the third blowout attempt, most guys would bail out, or at least let go of her hand. But Han persists, relentlessly, and keeps up the physical contact. In fact, he seems to ENJOY her blowout attempt as he laughs at it and sees it as an indicator of interest from her. “Scoundrel? Scoundrel? I like the sound of that.”

With that, Han takes her hand and starts to massage it. 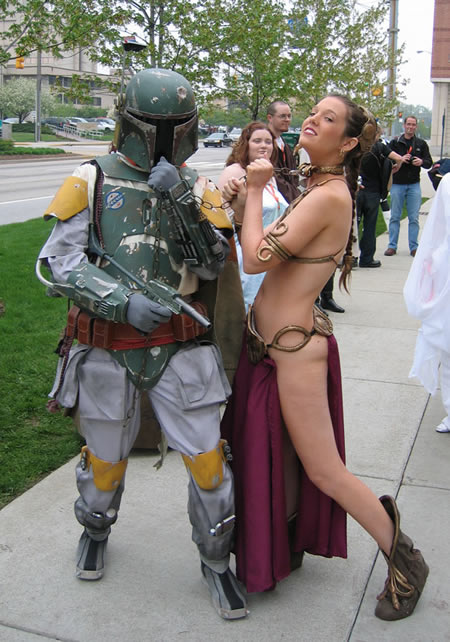 “Stop what?” It’s not even registering in his reality. Han just ignores it.

At this point you can subtly sense that Leia has switch from resistance to attraction.

Leia’s blowout attempt #5: She is persistent, isn’t she? “Stop that! My hands are dirty.”

But Han doesn’t react, her “bitch shield” is irrelevant. It doesn’t even register in his reality, it doesn’t exist. He just persists. He’s a man who knows what he wants and goes for it. He does not care about what others think of him, he doesn’t wait for signs from the girl that it’s okay to continue. Han again just rolls with it. “My hands are dirty, too. What are you afraid of?”

At this point Han hits her with the triangular gaze, the intense, unbroken and piercing “I will fuck you” eye contact. He moves in and closes the space between their bodies. 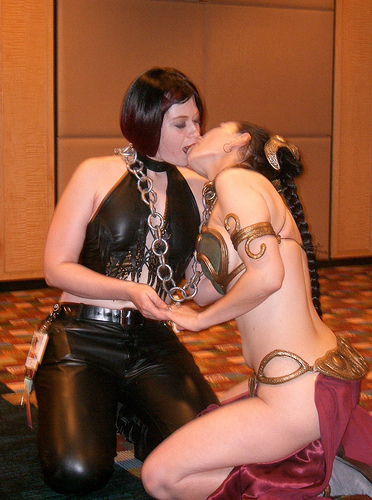 But Han doesn’t let her negativity affect him with his almost delusional sense of self-propulsion and destiny. No matter how many times Leia says “No thanks” he persists, unwavering, almost with delusional belief and conviction in the attraction and getting laid. And at this point her voice betrays her attraction.

Han leads again: “You like me because I’m a scoundrel. There aren’t enough scoundrels in your life.”

Leia’s blowout attempt #7: “I happen to like nice men,” she says but now her voice is more excited than resistant.

Han is so unreactive he eventually sucks her into his version of reality and leads her with the kiss and wins the girl.

In a very real sense, like Neo in the Matrix, Han was able to “bend” the fabric of reality, “bend” the attraction dynamic, just by a delusional ignoring of hers and relentlessly persisting in his own with 100% belief.

The best naturals are great at what they do not because of a bunch of lines and techniques. It’s because they don’t worry about what others think on their mission of getting laid.

That’s why I created Nonverbal Sexual Mind Control program. It shows you how to persist through initial resistance and “turn around the girl.”  About 90% of the time this can be done effectively.

You see, women like persistence. Women want a guy who plows through. Women want guys who go for what they want. Persisting despite the woman shows to her that you’re an alpha male, that you’re a leader, and that you can potentially give her powerful offspring.

It’s that ignoring the blowouts, setting your own reality, and plowing through initial resistance that most generates the mad attraction.

In Han’s case, he got a “No” Seven times, before he got the “Yes!” That’s because Leia “flipped” states when Han overpowered her with his.

Let me ask you– what would you have done?

Are you always looking for the girl’s immediate approval and slink off at the first sign of resistance… or do you persist like a runaway train and close in hard to generate that hard attraction and get laid?

So one of guys biggest problems is approach anxiety and I want to share with you a little example to help you out with this.

Guys hold back approaching women because they are fearful of taking a hit to their ego and self-confidence.

This guy is cultivating his identity as the rich guy, or the good looking guy, or the guy with the cool routine, or the guy looking for her approval. It’s like driving your ego, your beautifully fragile Mercedes ego up to the girl fearful that she’s going to spit on it and dirty it up.

Rather, the un-reactive man is like the sky, spitting at him is completely pointless and futile.

He doesn’t hold onto any negativity, he doesn’t acknowledge it. The un-reactive man is in such a positive, social state that it’s beyond his conception that any negativity could exist.

This is not an intellectual exercise or strategy of ignoring negativity, but literally your altered state is so positive you literally do not even feel the negativity. It just flows past you into empty space, like sky.

If the woman were to spit into the sky, it would only come back into her own face. The sky cannot be dirtied by her spit.

Her tests or resistance are not meaningful unless you accept them. Unless you grab them, it is meaningless, noise, they have nothing to do with your reality.

It is like shouting insults in an empty room. Yes, she will create a sound, but when the sound waves have dissipated the room is again the same room. The room cannot hold onto the test or negativity, the empty room is just an empty room.

So in fact you cannot get blown out by words unless you take them, unless you cooperate with them. If you FEEL blown out, it is your responsibility, don’t blame the girl. Why did you accept it?

After all, why accept her poison? Somebody brings you a cup of poison to you, it’s not necessary that you drink it. Simply say “thank you” and radiate her more positivity and keep going.

Coming in with the right state the woman cannot blow you out of the set; if she tries and you remain unaffected like the sky, she’ll quickly give up. In fact, at a certain point she will “flip sides” and become intensely attracted to you because you didn’t sulk away like every other guy would.