You can build social value to a girl in a number of ways – through talking to other girls in front of her, by leading her group of friends, by telling stories, by playfully teasing her, and so on.

This is overkill. As soon as the girl begins to like you, you should screen and accept her, separate her from her friends if you need to, and then build one-on-one bond and connection with her.

The fact is that sufficient value can be built for yourself in just 3 minutes. Or it may take 20 minutes – or even 30 minutes. But it shouldn’t take two hours. It really only takes between 3 minutes and 20 minutes to build social value to a girl before she’ll start giving you green lights.

Why do some guys get stuck in the building value step of the seduction?  It’s as if they’re trying to prove themselves to the girl, so they keep stacking more value-building routines and stories one after another. They never know when to stop.

Remember, you just need enough social value to get a few green lights from the girl you like. That’s it.

Lowering Her Social Value Too Much

Remember, when you meet a new girl who is socially valuable herself (she’s HOT in other words), you want to raise your social value while at the same time lower hers.

You can do this by ignoring the girl while you talk to her friends, turning your back to her, or making light fun about her hair or clothes for instance with value zingers

But some guys take this way too far.

Instead of playful, they act “cocky” in a negative way, being overtly rude to the girl or teasing her too many times. They keep subtly putting the girl down until she thinks that he’s a total asshole – and for good reason – because he’s acting like one!

At most, throw out value zinger or two to lower the girl’s social value… “You know, I’m really used to taller girls,” or “It looks like your roots are showing,” but then stop. And that’s only for the really hot girls that have a lot of guys after them.

If you’re coming across as too cocky in order to bash her social value into the ground, girls won’t want to be around you. You’ll come across as a “jerk” and not in a good way.

It will probably happen to you at least a few times until you get the feel for how much is enough, as you experiment.  But if it’s a common and chronic issue with you, then lighten up and go easy.

Going Backwards in a Seduction

Another mistake guys make is moving backwards in the seduction.

Instead of moving the process along forward to the next step, they start repeating steps they’ve already made!

For example, a guy will build social value through stories and teasing, screen and accept the girl, build one-on-one bond and connection with the girl… and then, when she’s ready to sleep with him, he goes back to doing more stories and teasing.

Here you are moving a step backward – you are regressing in the seduction. If you have her isolated and are building bond and connection with her, there’s no reason to go back to building social value. You are simply wasting time.  She likes you already.  She knows you like her too, because you accepted her.  You don’t need to tell more funny stories, tease her, or build more social proof anymore.  It’s already understood that there’s a mutual attraction.

Like a storybook, the seduction has a timeline and a plot.  Don’t revisit old scenes – continue to push forward to the next one.

Let’s say you’re at a club. You build social value, screen, isolate, and build bond and connection.  You set up a time to meet the girl for a second date.  Later on you meet her at the beach.

Now there’s no reason to go back to building attraction or screening her.  Do NOT continue to ignore her, throw value zingers at her and so on.  She already likes you.  You’ve already made it clear that you like her. Just keep building more comfort.  Sure, if the situation naturally arises for you to demonstrate value (like talking to the hot lifeguard babe in front of her), you can do that, but don’t make it your main mission.  The main goal is to press FORWARD on to the next step – to get her over at your house and build more bond and connection with her there.

Being Socially Valuable = Attractive to Women

How To Ignore Her To Get Her Attention 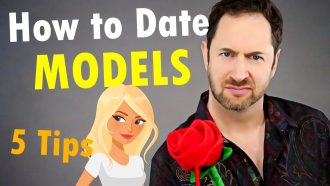 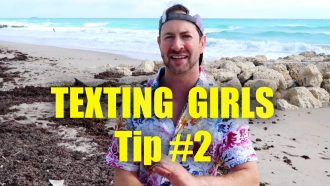 Texting Girls – Don’t Ask For The Date Right Away