Here’s an *awesome* tip for making conversation with pretty girls, that literally keeps the girl frozen in place as you talk to her.

I can almost always tell when a commercial is coming.  So can you.  You know, the music swells, the drama builds, something important is about… to… happen.  Then boom.  Commercials.

This is where the term ‘cliffhanger’ comes from.  Producers didn’t take too long to figure out that the key to keeping viewers watching through their ads is to simply ask a question that they want to see answered.

And you know what?  It works.  It works so well, that I bet you YOURSELF have watched shows you didn’t care about, that you thought were bad, putrid, the worst kind of television… but you wound up sitting through the whole thing because there was a question you wanted the answer to.

ALL television shows use unanswered questions and cliffhangers because it works REALLY well. Human beings are fundamentally curious animals. We are biologically wired to want to know.

Or ever notice how much more exciting it is to open a gift wrapped present and seeing what’s inside rather than just having something plainly handed to you?

Curiosity is a “click whirr”, knee-jerk response that all human beings reliably and consistently respond to. And you can use curiosity to literally force women to respond enthusiastically to your advances with “click whirr” reliability.

And when you’re making conversation with girls for the first time, she’s making snap judgments, and you’ve got to keep her interest.

You can’t think of a THING, the silence is getting awkward, and suddenly she’s saying ‘Nice to meet you,’ and walking out of your life.

What could you have done?

I LOVE this technique when making conversation with girls.  Even if you’ve got all the social skill of an ape, master the hook and women will inexplicably find themselves interested in what you’re saying.

If you can carry yourself in a halfway-decent manner, a well-placed hook or two will GREATLY magnify her interest in the conversation.

For example, one of my favorite hooks is ‘You know, I’ve noticed something very interesting about you.  I bet no one else has ever noticed it.’

I can guarantee that 99 out of 100 women will stop dead in their tracks and ask what it is that you noticed. You’ve used her own curiosity to literally force her to stop and respond… you have hooked her like a fish to your line.

The second thing you must do is that after you throw her the Hook, is wait. Yes, shut up! Throw the hook, be quiet, and WAIT for her to respond. For example tell her,

“I don’t know if anyone has ever told you this before, but I noticed something really interesting about you.”  Now WAIT for her response.

This may seem like an obvious thing to do when making conversation with girls, but a lot of guys tend to throw their hook and immediately give the answer without giving their worm, the woman, time to wiggle. For example, they’ll ruin the power of the hook and say instead, “I noticed something really interesting about you… it’s those boots you’re wearing… I use to have a girlfriend who wore those same boots!”

In this example, the hook is there but the girl never had the chance to get her curiosity going!

You can tell her, “You’ll never believe it if I told you.”

This gets her curiosity flaming!

Another variation is to cast your hook and then begin talking about something entirely else. This way, as you talk to her, she’ll have that curiosity gnawing at the back of her mind and she won’t be able to leave you until it’s scratched!

For example, when she asks you, “So what do you do?”

You reply, “Oh, what I do is really interesting… which reminds me of what you said earlier about liking exciting, adventuresome people and what happened to me when I was climbing Mt Fuji in Japan last year…”

That way you keep her squirming what you actually do, while you talk about other things.  She’ll stand there listening to you talk, no matter how beautiful she is, because the female mind can’t go without an answer.

And that way you can continue making conversation with all sorts of girls and keep them listening. 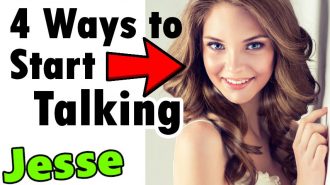 When a Girl Asks ‘How Old Are You?’ – How to Answer Her Back