Don’t try to buy your way to a woman’s heart. The more money you spend the more she acts like a prostitute- your money for her attention

Women feel pressure to reciprocate favors you’ve done for her- but sexually. She’ll feel pressure, she’ll be uncomfortable, and she’ll dump you

Stop trying to impress a beautiful woman. You will be the only man she’s ever met who’s not begging for her approval

Compliment sparingly- compliments lose their power the more you use them

If you compliment a woman too much and buy her gifts, you’re a dork. Only needy men suck up for a woman’s attention

Being “likable” does not equal being sexually desired. Being liked is not enough. Friends are liked. You must be sexy and sexual

Don’t bribe beautiful women for their attention, approval, or sex. Your money alone won’t make them respect you

Talk to people in front of your woman. Be sociable- it conveys sexual choice that women find extremely attractive

Take responsibility for your actions. If you hurt her, be a man and apologize

Set the frame- the man who leads always succeeds. By leading the frame you create circumstances and a reality that gets women

Beautiful women can have sex whenever they want with needy men. Their real challenge is to find a strong man who doesn’t need them

Focus on your own self-improvement. Be your own best competition and constantly break your limitations

Women will test you. “Do you walk your talk?” It’s their way of knowing whether you’re the real deal

Putting up drama is one of a woman’s tests. Remain cool, calm, confident- women like a man who doesn’t take her drama too seriously

A woman will test you by saying how other men are interested in her. She wants to see if you’re jealous and needy. Just keep your cool

Women love a man who is stable, powerful and decisive… but chivalrous. Wussy men who always kiss ass are none of these

Compliments when said powerfully, congruently, relaxed, with eye contact, with a smile, and with no apology floor a woman off her feet

If you compliment a woman simply to win her approval, she will see you as a weak beggar. Rather, compliment from a place of personal power

Don’t compliment women on their looks- this is what every guy does. Rather, compliment a woman on her energy and how she holds herself

Don’t bring a woman flowers on the first date. After all, how has she proven herself to you besides her looks? Women don’t sleep with needy men!

Lavishing a woman with gifts is submissive behavior. Who is the dominant one, you or her? Have her be the one lavishing you with kisses

Don’t reward beautiful women for their bad behavior. If they’re acting like a spoiled brat, stand up for what’s right and say NO

Be decisive, but don’t be a dictator. You want a woman who trusts your decisions, not one who follows you out of coercion and control

Don’t chase a woman’s approval like a lost puppy. Women want a man, not a wuss

Take into account a woman’s opinions but make your own decisions. You won’t always win, but she’ll respect you

If you don’t take charge, women will take charge of you. Take into account what she says, but make decisions

Pickiness is a quality of an attractive man. Be picky about the food you eat, what you drink, the clothes you wear, and even picky of where you sit

Handle a woman’s bad moods playfully. Break her state- tickle her, spin her around, dance with her, slap her butt, hit her with a pillow, laugh

If you allow a woman to walk all over you and reward her for it, you create a spoiled monster

Treat your woman like you would a forbidden mistress. Throw her down on the bed and ravish her

When you lack purpose, a woman will direct your life, hassle, and nag you. She will attempt to give you direction since you lack it

If a woman sees you have options and are desirable to other women, she’ll work hard with good behavior to keep you happy

Women will often plea and pout and withdraw emotionally to get their way- don’t cave in. They’re testing if you have a backbone

You know you’re pussy-whipped when you become falsely agreeable

Instead of encouraging and rewarding women’s bad behavior, encourage and reward her GOOD behavior

All the money, material, and career success in the world is pointless if you can’t relax enough to be around and entertain beautiful women

Candies, cards, flowers, and fine dining can’t cover up your nervousness. A relaxed man needs none of these and is desired for who he is

Be a gentleman- hold the door, let her walk first, take her hand. But don’t be a boring stiff who’s always worried about how to act

Don’t profess your love for a woman until AFTER you’ve slept with her- otherwise, the pressure will drive her away

On a date, don’t lean in and fawn over a woman. Sit back, relax, and let her come to you 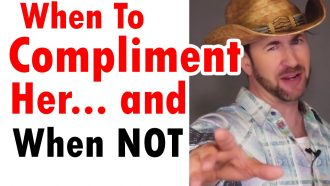 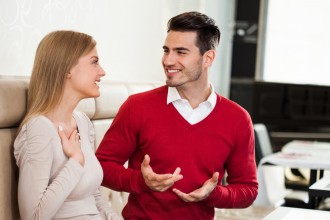