The question is, should you be using canned, memorized routines… and how would you go about talking to girls if you went completely natural with the ultimate natural game?

And someone who’s conversation is very routine-based, will just stack routines one after another.

They spit out a canned routine, then immediately another, then another, then and another, and this kind of guy could talk to 5 different women, and the conversations would all sound pretty similar.

What Routines Allow You To Do

So what are the benefits of routine-based conversation? And there has to be benefits, or no one would use them.

Well, canned routines do give you something to say that is likely to get a positive reaction from a girl. A field tested routine will, more likely, ensure that you will make the girl laugh or catch her attention.

And for that reason, when you stack routines, one after another, the benefit that they give you is that they make you feel SAFE. Canned material gives you a sense of SAFETY going in to the social interaction, putting you in control.

And routines appeal to that desire to be LIKED be girls. If you want girls to like you at all costs, you hold close to your heart your routines because that’s the best way to ensure that the girls will LIKE you, as in giggling and laughing at your canned material.

Routines also protect your EGO. Let’s say you talk to a girl, and she just doesn’t want to talk back to you. You bust out some routines, and she’s just not interested. Well, I’m using this routine… so it’s not MY fault. It’s not about me, it’s a problem this routine! The routine wasn’t good enough and it was written by somebody ELSE.

OR the GIRL sucks, because that was an awesome routine, and the previous 3 girls were laughing at it, so this girl must be a bitch. It’s HER fault she doesn’t like me or my routine. She sucks. And my ego is protected.

So what do routines give me? Hell, they’re safe. I feel safe, it feels less risky because I’m not putting myself out there. I’m putting the routine out there.

Canned routines play into my desire to be LIKED, because I’m making the girls giggle and laugh.

And they protect my ego. Because if the routine doesn’t work like it should, well, that’s the routine’s fault, not mine. Or it’s such a cool routine, it’s the girl that’s socially retarded, not me.

And one more thing. Canned routines play into the magic bullet fantasy. I just have to memorize and say X Y and Z, and I have the magic formula to make any girl giggle and laugh and I will be LIKED. NO risk. NO uncertainty. Just remember this exact button combination on my Nintendo controller and I can beat Mike Tyson’s punch-out! I can get the girl to LIKE me.

How Routines Ultimately Fuck You Up

On the other hand, you can already begin to see, how canned conversation can totally fuck with your head compared to natural game methods.

But what perhaps you can’t see is how long the list of negatives are and how fucking fucked up it will fuck with your head.

But sometimes you don’t get that good, positive reaction, for whatever reason. And when your canned routine doesn’t go as planned, it throws you off. You’re at a loss. Wait, that was supposed to work? Do I go into my next routine now?? Do I just ignore her?? She was supposed to laugh, WTF?? So either you don’t know what to do next, or we EJECT from the set feeling like SHIT because our killer routine TANKED for whatever reason, and the girls detected that we were thrown off and deflated, and they lose their interest in us.

Basically routines set this high expectation of making the girls LIKE us. And when they don’t go as planned, we DEFLATE and it throws us off.

Routines also turn us into positive reaction response junkies. We throw out the canned lines to get a good REPONSE, the good REACTION to make the girls like us. We want approval from the girls. And you get into this habit of constantly seeking good reactions. You become a response junkie.

And this actually makes you very conservative in your game, it makes you the opposite of taking Reckless action.

Because when you always want to be please people, when you always want to make the best impression, when you’re always trying to get positive responses, what ends up happening is you make no waves, you make no ripples. You’re just a nice, clean, smooth surface. And it’ is very fake. And it means a tendency toward inaction, seeking rapport in quiet voice, and bailing out of the set at the first sign of resistance or first sign things aren’t going as planned.

You stop being Reckless, you stop persisting because you’re always looking for good reactions in every moment from your canned stuff. That’s called being the entertainer man, the positive response junkie.

Whereas the Reckless Rake, he just keeps going, misinterpreting the girl’s reactions, because, frankly, he doesn’t care what her reaction is. He just assumes that the girl is attracted to everything he does, no matter what he’s saying. He doesn’t care about her reaction or getting a positive response right off the bat. The Reckless Rake knows it can take time for the girl to warm up to him and that he can get away with saying anything, and lowering his standards of conversation, and just persisting… the ultimate natural game method.

And canned stuff puts you inside of your head. Accessing memorized lines makes you analytical, planning out what to say next and how to direct the conversation. It becomes like playing chess inside your head and you’re no longer in the present moment. That kind of thinking just kills the fun energy. That’s because thinking and concentration is a narrowing down of your consciousness so you become one-pointed and you can’t adapt to the flow and natural direction of the conversation.

Worse, with canned stuff you start to feel this empty icky feeling after a while. I mean, how weird is it to say, “Who lies more, men or women?” 20 times in a row, over your shoulder? It just starts to feel pointless and fake like you’re this robot going through the motions, just to get acceptance and be liked from a bunch of people you don’t even fucking know.

And even when a girl DOES like you when you spout that canned stuff, you still feel icky and empty because the girl is liking you for your clever routines written by somebody else, and not really for YOU. It continually reinforces that women like your lines, as opposed to liking you just for you, and that overtime this is going to fucking screw with your head. It doesn’t build true, inner core confidence and self worth over the long haul.

And with canned stuff, you never really learn how to approach a girl normally. You can do hundreds of canned openers, and STILL not be able to approach a girl and get her attracted just by simply introducing yourself. You may be able to do a canned opinion opener, but you still get terribly anxious just saying hello and telling the girl straight up that she’s cute. So you never really learn to just approach a woman normally with nothing inside your head, like a true natural would.

How Girls Sense Routines Are a Demonstration Of Lower Value

And canned routines fundamentally come from a place of lower value. It’s a demonstration of lower value, and women will generally pickup on that.

When you’re wanting people to like you, when you’re actively trying to think and recite back things to say to keep the conversation going, that’s coming from a place of lower value and people subtly pick up on it. It doesn’t work on the really hot women. It doesn’t generate that hard attraction.

Even if your canned line is DAMN funny and makes the girls laugh, it’s still demonstrating lower value because you’re trying to keep the conversation going and putting in enormous effort to get good reactions and make the girls like you, and you only do that when you’re talking to someone of higher value than yourself.

Seeking positive reactions through manipulation suggests that you’re the 7, and the girl is the 10, and you’re trying to impress her to get approval. You’ve prepared material because you feel like you’re starting social interactions from a position of lower value and you have a deficit to compensate for.

You feel like a 7, you’re assuming the girl is a higher number, and you have to prove yourself to her. You’re looking for the routine to work, rather than having the girl react to whatever YOU are saying.

Now there, is this “training wheels” argument out there, and it goes like this. Yeah, canned routines and lines have all of these problems and all of these issues.

BUT! When you’re first starting out, it’s good to have canned stuff until you feel comfortable enough talking to girls on your own, to have your own conversations and develop your own stories.

But the problem with this argument is, is that you learn to become a response junkie for positive reactions with the girls. So even when you don’t need the canned stuff anymore, well, now you’re too scared to let the canned stuff go. Because they’re like a security blanket. They’ve become your crutch. And you never want to grow out of them.

So it’s better to learn game from the beginning without canned stuff so that you don’t learn bad habits in the first place.

So, obviously the solution is to drop the canned, reaction seeking stuff that makes girls giggle and laugh, for a natural game conversational style that’s authentic to YOU and is REAL, but also generates HARD attraction.

And that way you can just introduce yourself, smile, and get the girl without all this stuff swirling around your head driving you fucking mad.

You can just be yourself, and be real, and be authentic, and when girls like you back, you know they like you for YOU. And you’ll actually enjoy it then, because you’re not trying to be someone you’re not, you’re not putting on a show. It’s just psychologically healthier.

You stop becoming a response junkie to be liked, you stop doing these crazy verbal back-flips to get approval from girls and stop being that dancing monkey entertainer man.

So in the next lesson we’re going to talk about how to hold conversations and social interaction WITHOUT spewing a river of canned routines, and how to wean yourself off the canned stuff once and for all.

So until next time, this is Jesse Charger, and I will talk to you next time!

7 thoughts on “The Ultimate Natural Game Methodology Vs. Routines Guide” 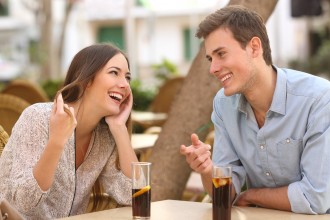 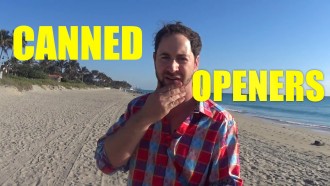