Sexual Fury or “Intent” is the state of your mind that directs your actions toward a specific object or goal to do something.

So what that means, is like in law, the term “criminal intent” is used if they think that you were planning a crime, that your intention was to commit a crime before you did it.

But if you were to *accidentally* run through a red light and hit someone, then your intent was clear and although you could still go to jail for it, because it was an accident, you weren’t intending to hurt the person, your jail sentence wouldn’t be nearly as a harsh.

So intent is your state of mind that guides your actions.

So let’s look at Intent with opening girls for example.

Like guy #1 goes up to the cutie and he’s just feeling or thinking, “Uh, yeah she’s hot. I want to tap THAT. Look at her boobs. Hmmm, yummy!” And he goes up to the girl and opens her.

Guy #2 has a different intent driving his actions. He’s thinking, “Oh man, I really hope this girl likes me. I hope I say the right thing. What’s going to happen if she has a boyfriend and her boyfriend comes around and sees me do it… well, I’ll just do it anyway.” And he approaches the girl. He has a very different intent or purpose in his mind driving his actions than guy #1.

Guy #3 is with his male buddies, his posse, and he’s thinking, “Oh man my friends are here and I’ve got to show them that I am hot stuff and I can approach this girl. I’m nervous, but fuck it, I’m just going to do it anyway. Alright, I’ll go for it!”

And he goes up the girl, but his Intent is very different from guy #1, or guy #2.

So all these guys are approaching the same girl, and to the outsider it could look like the same exact approach. Guy goes up to girl.

But the 3 guys all have different Intent on their minds that drive their actions.

Guy #2 is approaching just because he feels like he needs to approach. He’s on a 30 day challenge maybe.

And guy #3 wants to look cool in front of his friends.

All different intents driving an opener.

Intensity of Your Sexual Fury

So let’s take Guy #1 who’s thinking. “Uh, yeah she’s hot. I want tap that. Look at her boobs. Hmmm, yummy!” And he goes up to the girl. His horniness is driving his actions.

You know low level of intent. The intent is there, but it’s not very strong, it’s barely motivating him forward.

That’s like feeling that particular focus of your Intent very intensely. The intensity is motivating your actions so much that it’s almost difficult to hold back from approaching the girl.

So to really make this concept of what is Intent clear, Intent has 2 characteristics to it.

The first characteristic of Intent is the purpose or the focus in your mind that’s driving your actions.

And intent also has an intensity. How intense are the feelings that are driving you in your actions.

So intent basically has a direction or a focus, and intent also has an intensity volume knob to it.

And every action you do in your life as Intent behind it. In fact, action cannot happen without intent.

If you had NO intent at all in your life, you would just sit on the sofa all day and not move.

Even eating has intent. You feel hunger, which has a purpose that may drive you to eat a granola bar it your intent is to eat to lose weight, or you might eat a pizza if your intent is to just feel caloric satisfaction.

And your hunger has an intensity to it, a volume knob, that will drive you to eat a little bit or a lot if you’re starving and the hunger is overwhelming you.

So every action in your life has Intent in its focus, purpose, direction, and also the second characteristic of intensity.

Intent and Sexual Fury is not a “routine”

And because Intent drives all your actions in your life, including how often you go out to meet women, the drive in how you open women, how you interact with women, I don’t want you to think of Intent as a “routine” or a “tactic” that you pull out of your pocket on occasion.

Because it’s a universal concept that drives everything that you do in your life from sleeping, to whether you work out, to whether you go out to meet girls, and how you open them and the manner in which you interact with them, to your hobbies, and what you do with your free time.

And this concept of intent is fundamental to every moment that you’re “gaming” girls. It’s there all the time, even if you’re not thinking about it and not conscious about your intent. So it’s not a routine, it’s not a tactic. Instead it’s always present and there in how it’s driving your actions.

So that’s intent in a nutshell, hit me up in the VIP Lounge if you’ve got questions.

So let’s take the example of opening a girl.

You can open a girl from many different motivations or with different intent in mind. Like you want to do it to impress your friends, or you open her because you’re on a mission to open x number of girls that day, or you want to make her like you, or because you want a girlfriend.

All of these intentions are going to produce approach anxiety, scatter you, and put you inside your head.

What you want to do instead is simplify your intent to the most primitive, animalistic level that reptiles or dogs in heat would have, and what most other species would feel.

And that’s just pure focus on the girl. You spot the girl, and everything else just falls away. You don’t even notice her friends. You don’t notice what she’s doing. You don’t have any goals or thoughts about getting this or getting that.

You just see the girl there, and you get really stupid, really primitive and simple like if you were a male dog seeing a female dog. You go caveman stupid and animal primitive.

You see girl there. And it’s like “Cave girl, she is hot. Cave man like hot girl. Cave man want sex with hot girl.”

So the focus of your intent is almost retarded simple. That’s about all that’s going through your head is feeling the attraction and only seeing the object of your attraction and nothing else. Focus. Clarity. Simplified.
Intensity of Sexual Fury
At the same time, Intent has an intensity, a volume knob.

You can feel your intent very weakly, or very strongly.

So you want enough strength in your intent where it’s like, “Oh yeah, hot girl, I want to have sex with hot girl.” And that focus and clarity combined with a strong intensity is what we call, “Feeling The Fury.”

“Feeling The Fury” is a particular focus, direction, clarity and intensity of intent.

And when you have the sexual fury, it melts away every excuse you have in your head. You’re not analyzing. You’re not thinking. This is lower-order brain functioning of the Limbic brain of a primitive mammal species.

And that “Feeling The Sexual Fury” is the Intent that you want to have to drive your actions.

It’s what you want to drive you to get out of the house. You see the girl there, and “Feeling The Sexual Fury” you go up to her and you open her from that drive and Intent.

You open Feeling the Fury, so that when you approach her, your words and actions clearly communicate to her that you think she’s hot. You could open her by telling her she’s cute, or by getting physical with her, or looking her right into the eyes and smiling.

She’s got to know or feel at least that you’re hot for her. And it’s not a “routine”. Being “direct” comes through because you Feel the Fury, so you naturally express your attraction to the girl. It’s driven by the clarity of your intent. It’s just what you do, who you are, your style, it’s not a “routine” that you pull out “here and there”.

And the Fury, ideally, drives ALL of your micro-actions with the girl, in all of your moves from moment to moment.

Why Sexual Fury Is Attractive

Now women respond to this really well. And here’s why it’s so attractive and gets her sexually responsive when the woman feels your Sexual Fury.

Remember that concept that whatever you feel, the girl will feel.

Well, if you’re hiding your true intentions, and you pretend to be asexual to make the girl “like you”, not only will that make you feel lame yourself, but the girl is not going to feel sexual for you in return.

On some level, you need to feel that testosterone-fueled fury, that fire blazing up through your body of sexual intent and fury. On some level, the girl has to feel like you are deeply attracted to her.

And you expressing your sexual intent openly, by following the Fury with elements of both focus and intensity, will allow her to feel that rush of underlying sexual tension.

Number three, expressing your Sexual Fury openly and unapologetically to the girl, makes you real. It makes you authentic. Because everyone today is hiding their true intentions. Everyone today is being too “nice guy” and nice guy is codeword for “fake”, someone who is being sweet and nice to get liked and approval as a strategy for sex.

But when you express your Sexual Fury, you’re that “bad boy” that doesn’t care about what other people think. You’re not hiding. That’s the kind of guy women want to meet.

And she’ll feel that sexual tingle because women are inherently, biologically attracted to men to take the lead in going for what they want.

So all of those reasons, Feeling the Sexual Fury expressing your sexual intent to the girl through the opener and through your physical escalation, as the underpinning drive of your actions, is very attractive to women, makes women hot for you, and gets results. 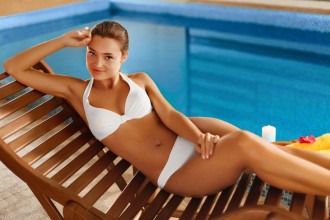 Hot Babe at Pool… How To GET Her! 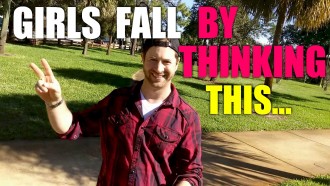 A Killer Pickup Line That Gives Girls That “Swept Away” Feeling Every Time!