If you want to fuck the really hot women, you need to present to them something that they can’t get with other guys. You have to dominate them with your masculine power.

Going up to smoking hotties, with a routine to make them giggle or being all nice is not going to cut it. She doesn’t want a girlfriend who makes her laugh. She wants a man with a hard dick will fuck her and go for what he wants.

It’s simply expressing your sexual intense without shame, without care about the outcome, and communicating to women that they are in immediate danger of being fucked by you.

Stick with sets even if they don’t look like they’re going well.

Your frame should be, “I’m the equivalent of a hot model, if I just keep on talking nonsense are about whatever I like, and she’s still standing there, that means she wants to suck my Dick.”

Because that’s the reality. Women want you to man up. Not waiting for indicators of interest, not waiting for good reactions. And not ejecting out of the set, not ever.

Push for the close until the girl either rejects you or fucks you.

In other words, even if the girl ignores you, you keep forcing her attention and talking.

Your persistence beats any girl’s resistance. Women want to make it happen but they want you to take every responsibility for it.

And to beat congruence tests, the formula is a simple one: stay in set no matter what with unreactive, talkative, positivity.

Stay in set. Just stick with the set, even if things aren’t going well. Be RELENTLESS. Never walk away, stay in the set until the girls either come around and warm up to you, or they leave.

Just get comfortable standing with the girls for the long haul, and be prepared to stay with the set for 4 hours if that’s what it takes. Be relentless.

The best guys push for the close until the chick either rejects him by walking away or he fucks her. And he gets blown out sometimes 2 or 3 times by the same girl, but he just STAYS IN SET until she hooks and turns around.

Because blow outs really don’t exist if you don’t allow them to. Unless the girl physically leaves you, you’re not blown out.

Reckless Game is not about getting a good reaction, and game is NOT about getting LIKED. It’s about generating hard attraction and getting laid by stepping on toes and getting blown out, and hanging in there and staying in set.

You beat congruence tests by not reacting to the girl or her shit tests.

Just being in set, just chatting up girls, will lead them to testing you and your intentions.

When the girls throw negative emotions that you, you just don’t react and you override them with positive emotions.

Even when the girl doesn’t look interested while you’re talking to her, that’s just a congruence test.

But congruence tests, shit tests, are exactly what you want. They are the source of the ultimate demonstration of higher value. In fact, you want to step on girl’s toes to create MORE tests.

By NOT reacting to tests it shows the girl that you know what you want and you will take on whatever shit it takes to get it. It shows her that you’re not fucking around.

How to beat tests: Be positive and unreactive

To pass congruence tests, as you’re staying in set no matter what, being talkative and physical, to PASS the tests you need to remain positive and remain unreactive.

And when girls throw negative emotions at you or don’t give you their complete attention, just don’t react by bailing out of the set or slinking away. Instead, override that with positive emotions. Continue to smile and continue to keep talking with positivity.

Just plow through and get back onto subjects or topics you want to talk about. Plow through.

Just remain positive and talkative and remain TOTALLY UNWAVERING to that.

Even if somebody insults you, the insult is meaningless unless you accept it. Unless you immediately take the insult, it’s meaningless, it’s noise, and it has nothing to do with you. Nobody can insult you unless you take it, unless you cooperate with it. So whenever you were insulted, YOU felt insulted. It was on you – it was your responsibility. You can’t say that somebody else insulted you. Why did you accept it?

Nobody can force you to accept negative vibes. It’s the other person’s freedom to be a downer, and it is your freedom whether or not to accept that.

So just don’t react, and keep doing 90% of the talking to her, touching her, and remaining positive by smiling and standing tall like a champ.

And if she calls you out on anything you say or do, just be unapologetic about it, don’t react. Beat the congruence test by just saying to her, “Yeah I said that,” or say to her, “Yeah I meant that.”

Brush off verbal congruence tests. If the girl asks you, “Are you by yourself?” just say to the girl, “Irrelevant,” or “It’s all good”, or “It’s fine”, and then just keep talking back to your topics.

Reacting comes down to this: the person who reacts is trying to change the way they act to be liked from the other person, the person who is staying themselves.

What you want is the GIRL to start reacting to YOU, while you remain steadfastly the same, smiling and positive and talkative throughout, but being YOU and not changing yourself to be liked.

Know that your identity as a MAN remains Your Truth, no matter what reaction a girl gives you. You speak and touch a girl as an expression of your TRUE SELF to express your sexual masculine intent and true desires, but nothing to impress or react to someone.

Stop deriving your sense of self and your feelings from the feedback you get, stop misinterpreting everything the girl says and does as indicators of interest, and instead start trusting in everything you do and say.

Because an attractive man’s reality is *internally* validated. HE decides how he’s going to feel, and the girls around him react to HIM. Instead of reacting to outside feedback, he takes action and deals with the consequences later. And by acting rather than reacting, that’s how the world comes to be influenced by him.

How to learn pickup FAST

Most guys need to work on their FURY and stop being so much of a nice, agreeable chap and instead become more of a smiling, talkative action-taker who doesn’t seek permission.

And handling your reactivity will seriously speed up your learning curve and your progress, because you’ll open a lot more girls and carry your sets much longer.

Because if you’re always managing reactions and trying to be liked, you don’t approach and you’re always bailing out of sets, it’s hard to build real experience.

When you handle your reactivity, you’ll improve so much faster. You’ll approach far more and you’ll stay in set far longer. It’s the key to making super FAST progress.

Accept whatever happens in the social interaction and redirect it to a more positive place. Turn everything around with a positive spin to whatever the girl says.

You can either ignore and cut the thread, or just repeat back anything negative with the same words, but bring positive, by positive spinning.

Like if the girl says to you, “I really hate it when random guys come up to me, it can be so annoying.” Instead of taking that as rejection and leaving, you would instead just use the same words back with a positive spin. You say back, “Whatever, you LOVE it when a really awesome attractive guy walks up to you, and you hit it off!” You just remain positive no matter what. (And most girls are nowhere near that negative)

Or if the girl says, “I’m really bored.” You can just say, “Awesome! Give me a high five!” and give her a huge smile.

So just twist and turn anything negative a girl says into the positive opposite… positive spin it. That’s leading the conversation in the direction that you want it to go in.

Technique #2: Misinterpret For Indicators of Interest

Also, don’t wait for indicators of interest (IOIs) and don’t react to IOIs… instead, you want to MISINTERPRET IOIs.

Misconstrue and misinterpret everything the girl does and says as an indicator of interest.

This is the heart of the “assume attraction” frame. The assume attraction frame is “I’m the male equivalent of Pamela Anderson. If I just keep on talking shit and she is still standing there, then she wants my dick. All I need to do is keep talking. If the girl is talking to me, it’s on and she wants it.”

And that is done by misinterpreting everything as an IOI.

Just assume everything is an IOI, even if she gives you a cold shoulder at first. Be delusional about this. Take what she says and interpret it as if she’s hitting on you. Be in the mind frame that everything can be interpreted sexually. Twist it around. Misinterpret her interest!! Everything is an IOI!

So if the girl says anything smarty or sassy or negative to you, like if she says, “I only date cute guys,” tell, her, “That’s the most romantic thing anyone has ever said to me” and give her a hug.

Or if she tells you a story about her pet dog, tell her, “Is this your form of foreplay?”

Or if the girl says, “Where are you from?” you can misinterpret it and tell her, “Yeah I am single. :-)”

Or if the girl says, “Where are your friends?”, you just misinterpret it as an IOI and say “Ok that’s it, it’s decided…I’m keeping you.” And you give her a hug.

So misinterpret everything the girl says and does as sexual interest in you is another essential way to LEAD the conversation.

Those are the components. Approach the girl and talk shit. Stay in set no matter what happens. And beat tests by not reacting. That’s what generates hard attraction more than any other tactic or routine. And it’s guaranteed to work. 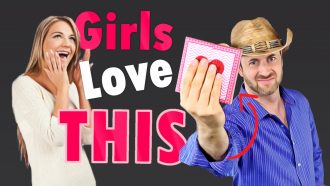 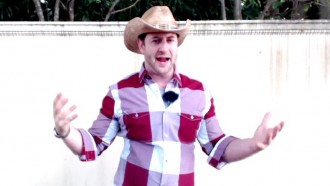 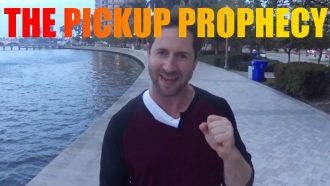