Hey Jesse, here’s how my girlfriend got pissed off at me for looking at some other girls.

I noticed a large group of young sexy coeds, in their teens, in a restaurant, while eating a late dinner with my girl.

They were doing some sort of funky activities for pledge week or an initiation in a back room with an open door.  I asked my girl about it and she wasn’t happy.  On the way out of the restaurant, I asked the owner, who we both know, but he was clueless about what was going on with the coeds.

However, my girl was so upset that I brought it up again.  She went on and on about how she was so embarrassed by my behavior. 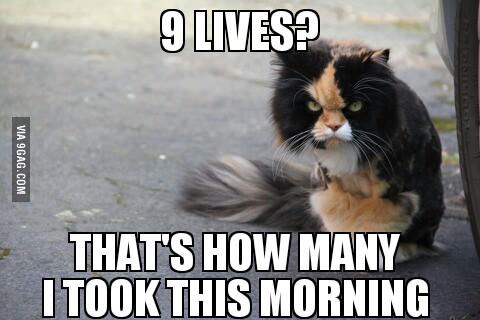 So I assume she was being jealous of my interest in the young coeds, and this was a test. You see, my girlfriend assumes I am a dog, like my own father, who ogles every girl that walks by.

But my interest in the coeds was really innocent.  She blamed me for something that I didn’t do and I tried to defend myself.  I bought into her frame, the frame that she can pick on me for something trivial out of her imagination.

Here’s where I screwed up.  I tried to smooth things over by giving her a backrub and tried talking about her “feelings”.  I was rewarding her bad behavior.

I even became intermittently apologetic, upset and angry.

I gave too much importance to what she said and let her antics control my inner state. 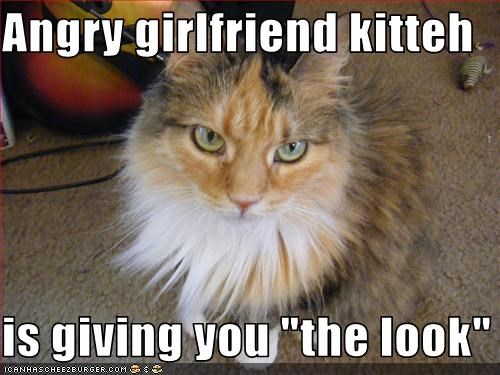 I was trying my best to keep her from going to bed angry!!!

She was tired and I felt rushed to resolve the “crisis”.

She went to bed angry and we obviously did NOT have sex, breaking a record of 3 weeks of daily steamy sex.

Here’s some responses I thought of to use on her:

“I forgive you for trying to ruin my night. However, thankfully, your mood doesn’t control my happiness.”

“Since we didn’t have sex last night, you get to wear the thong and leggings today with high heels. So I guess it’s win-win.”

The next day, I ended up using almost all of the above and it went really well.  Here’s how it went down:

First, I asked her to come into my bed.  She said to me, “No, come to me.”  I waited her out and she came to my bed.  I held her and stroked her until she brought up the incident again.  She was just repeating herself, and it seemed like she wanted ME to grovel.

I first went with, “I forgive you for almost ruining my night…”

I didn’t get to finish.

She felt that she had nothing to apologize for. She started to get heated and pull away.

When I said that now she has to wear the leggings, thong and heels, she sarcastically said something like “Thank you so much for letting me wear them”.  I pretended she was serious and went with it.  I said to her “Sure, you’re quite welcome, anytime,” which increased the playfulness a bit.

Telling her how her mood doesn’t affect my happiness was hard for her to believe, but I said it convincingly and then said it again but in other words. She was amazed that I could “compartmentalize” (her term) so well.

Nonetheless, despite now holding me close, she still wanted to harp on the episode.  I used the “Diffusion Technique” to say that we simply disagree, and we will continue to disagree for at least the next two weeks.  I told her that we will have to agree to disagree AND that it’s one thing that we love about each other, in that we are not simple “yes men” to each other.  We challenge each other.  She ate that up!

In the end, we had great sex this morning.

I am a true believer, thanks Jesse!  Any additional advice?

If it were merely a test, she would have dropped it more quickly.  That she kept harping on you about it strongly indicates that she’s deeply jealous and despises it when she perceives the attention is off of her.

Most girls will try to henpeck the man into submission over time.

Women will try to create enough tiring drama so that the man will calculate it’s not worth it.  Her goal is to make the man reason, “Yeah, I’d like to look at this girl, but I just don’t want to deal with all the DRAMA my woman will give me… eh, it’s not worth it.” 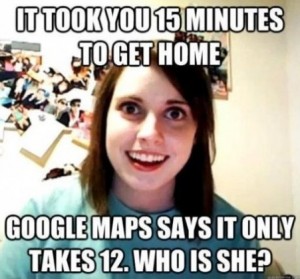 They can be ruthless about henpecking you, because it’s in their genetic interested that you never EVER come close to having sex with another woman.

You still bought into the frame that looking at another woman is bad.  So she got what she wanted, mission accomplished.

Another reason guys actually like it, is because of the saying, “A jealous girlfriend is a faithful girlfriend.  If she doesn’t get jealous when someone s your attention, it’s because someone has hers.”  So to guys, it feeds into their ego that the girl acts that way, and they just go with it. 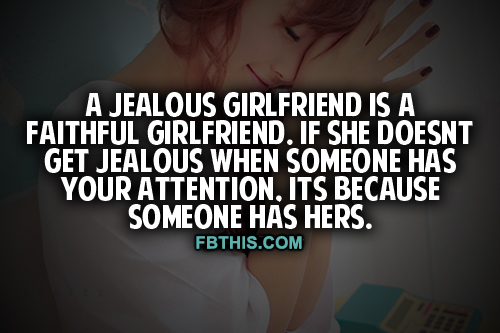 Guys also put up with it because their insecure and jealous themselves.  The idea of their woman looking at another man freaks them out, so they figure it’s only fair that they don’t look at women in return; or they don’t want to risk angering her, in case she would take on the same behavior.

So the reason men get boxed, often stems from the man’s own sabotaging belief systems.

Relationships feel exciting and great at first, because the two keep seducing each other.  It’s like a drug, and feels like this music video:

But with time, the woman creates drama to box the man’s options in, aided by the man himself.

You have a couple of options.

One is to just “go with the flow”.  Your women will keep having drama, and you’ll do everything you can to avoid that drama from coming up.  Which will mean you pretend never to notice other women, and your girl will have accomplished her mission of keeping you on the leash.  For most guys, this is just a “necessary evil” of enjoying a relationship.

Another option is to keep all women at arm’s length- never see a woman more than once a week.  This will keep her chasing you, and she won’t risk pissing you off with drama- it would be too easy to get dumped.  I suggest this method for outlier males that can meet women easily and quickly.

A third option is to be completely pimp tyrant with her and force her into a submissive role.

Here, you may mock her jealousy, or get angry, or get emotional- basically you get even MORE emotional than she does.  In bed, you constantly tell her how you’re going to fuck other women and how you’ll make her participate.  Some women will LOVE this and go with it.  Other women will greatly resist you, but still like it.  And yet other women will NOT put up with it, and give you so much return drama that the technique will backfire and it’s not worth the emotional output to always fight with the girl about it.

I’d only recommend this method if you feel 100% comfortable about walking away from the relationship, as it CAN backfire and is only good with a subset of women.  Check out the Blissnosis program if you’re interested in this option.

In your case Jason, I suggest you let the relationship cool off and start seeing her once a week.  Otherwise, it’s just drama you’ll have to put up with and say goodbye to looking at other women.