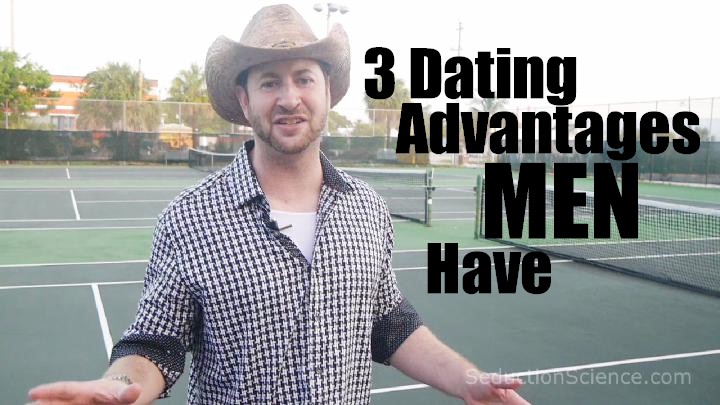 Question for Jesse: “Hey, Jesse, why is it that women have it so easy compared to guys and get to be the chooser? Why do men have to do a hell a lot more work than women in dating?”

Do women really have it easier than men in dating?

Now look at it from a woman’s point of view. Let’s take a woman in a nightclub. Let’s say she’s a hot girl with the full makeup on, the beautiful blonde hair, and the high heels, and the tight little dress, and the great legs, and nice little boobs.

Okay, is she really the chooser?

In one sense she IS the chooser because any guy that comes up to her, she can say yes or no to, or find out more about him. She can passively stand there and she will meet some guys.

But here’s the problem. Let’s say that there’s a guy over on the other side of the club, this handsome dude that her friends say, “Okay, this guy is the real deal. He’s romantic. He’s looking for a girl to wife up, that he wants to bring to Paris. He’s true and faithful. He’s exciting and he’s dangerous and he’s successful. He’s like the whole package.”

Yeah, she can meet guys that come up to her but she’s limited. She can’t take control of her own destiny into her hands and take action with that. She can’t take massive action. It’s kind of like she’s got these chains on her wrist that constrain her.

Whereas look, as a man, if you’re in a nightclub, you can go up to all 100 girls in that nightclub and meet them, or you can pick up your top 20 favorites and meet them all.

If you’re in a mall, you can take action and meet all those girls in the mall, too.

You’re not going to be slut shamed for doing that. People are going to hold you up on a pedestal and think that you’re a god. They’re going to look up to you. That’s going to be admirable and that’s great because you can more better design your lifestyle. You can take control of your destiny more, so it’s kind of like a tradeoff. Even though you can’t passively stand there as a man and expect to get some success, you can reap even more success if you’re a massive action taker.

The pyramid – who is really on top!

So, the bottom of the pyramid is all those men that are completely passive; then a little bit above that are all the girls that are average-looking girls. They can stand. They’re going to meet a couple of guys.

They just have more options because they can be proactive. They can go anywhere. They can land in a new city or new town and have a new girlfriend in a weekend. Personally, I think that’s the best deal of all. You really shouldn’t be jealous of women.

Another issue that a hot girl has is that she has a very short lifespan. Girls usually reach their peak at age 16, 17, 18, 19, and because they reach their peak so young in terms of their femininity, they don’t have much world experience.
They’re not too smart about it, so they’re eating junk food. They’re not exercising. Maybe their smoking, maybe their drinking, or maybe they’re just watching too much TV or spending too much time on the computer, doing social media, on their phones.

Of course, I’ve met 50-year-old women who are fitness fanatics and had bodies of 20-year-olds, but that’s very, very rare.

A man has a much longer shelf life.

A man is kind of like a slow-burning candle that burns brighter and brighter gradually as the years go by whereas a woman is like a firecracker. Boom! But then she’s out. It burns brightly, burns intensely brightly, lights up the night sky, but just as quick as it started, it’s over.

If you’re going to give me the two deals, I would rather be that long-burning candle that can plan, maybe you’re dumb at 16 or 17, or 18, you make mistakes. Well you can correct course in your mid 20s or even in your mid 30s. You can correct course in your mid 40s and come back from being dumb, and stupid, and young and design your dream lifestyle. You have a lot more time to work with whereas the woman’s peak years are when she’s least experienced.

The other thing is like just being butthurt about girls have it so easy and I wish I could just passively sit here, stand here, and do nothing and have it as easy as the hot girl.

I mean that’s childish thinking. It’s kind of like, “Why do I have to eat my vegetables? I just want to eat ice cream for lunch and dinner and I’m butthurt about that.”

That’s being a little kid and living in a fantasy world.

Reality is not like that. Reality is that as a man with a cock, society doesn’t need you.

I mean if you designed a special bomb that just killed off all the men and left the women untouched and you dropped this bomb on your hometown or your home city, all the men were wiped out and there was just one man left standing with a thousand women. He could fuck every single one of those thousand girls, get them all pregnant, and repopulate the population within one generation.

Advertisers love that. Companies love that because it’s more time where your eyeballs are watching ads and buying things and actually getting on with your life, being successful, and meeting girls.

So will you be at the bottom… or the top?

Again, no one is going to care if you’re at the bottom of the pyramid. There’s only so much space at the very top for the extreme action takers. You can’t have thousands of guys flooding the nightclub or the mall cold approaching girls. It just wouldn’t work. Society would fall apart.

There’s only so much space at the top.

What’s good about being a guy is that most guys won’t’ take action. There’s very few spaces at the top but there’s no men stepping up to take them. If you want to take control of your destiny, if you want to be at the top of that pyramid and have it even better than a hot girl, more options than a hot girl by taking control, by working on yourself, by hitting the gym, by cold approaching girls, it’s there for you.

It’s there for the taking, and you can do it. It’s very doable if you put in the time and the effort.