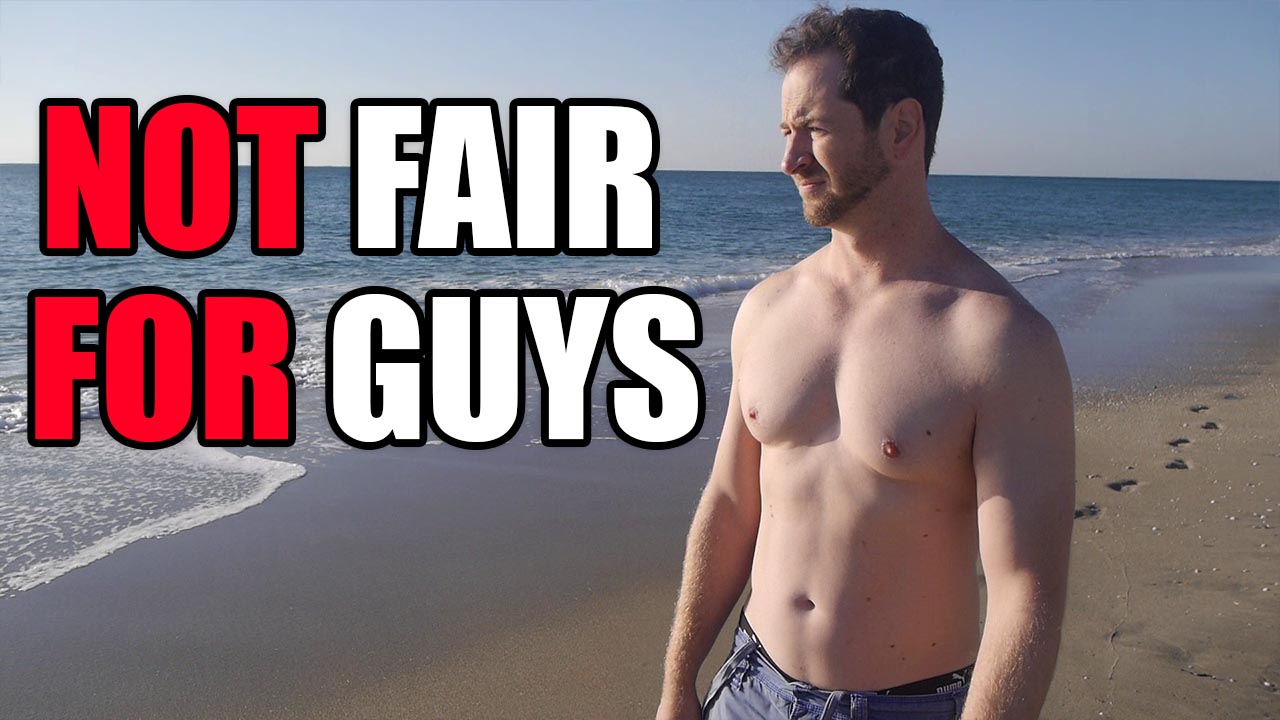 Dating Isn’t Fair – How To Beat the System

I received a comment from Arnold and he wrote in to me. “Hey, Jesse, why can’t hot girls get laid so easily and us guys have to work so hard for it? I’m not really complaining but at the same time that doesn’t really seem fair.”

Yeah, Arnold, on one level, you’re completely right, it’s not fair at all. I mean a girl can just put on a sexy cocktail dress, high heels, a pushup bra, do her hair, do her makeup, go out any night of the week, and she can get laid a lot easier than you can. But the question I want to ask you is it really productive to be crying about that, to be spending mental energy thinking about that. It wouldn’t help you to curl up into a ball into a fetal position, go into a corner and just give up, or let that discourage you.

Men that succeed are men that take action and besides that’s a very passive female energy desire just wanting to stand there, wanting to look pretty and having guys come up and wanting to fuck you.

You Will Grow, Women Won’t

But what you have to go through, the transformation you have to endure as a man, how do you have to change yourself to become a man that can get laid relatively easily with very pretty girls, you’re going to become a much better person.

You’re going to probably transform your body in that process.

You’re going to have to transform your mentality and your beliefs.

You’re going to become more grounded as a man.

You’re going to have to stop caring so much about what other people think of you.

You are going to become a much better person because it’s a journey. It has to be a journey of transformation.

Whereas a girl typically only has a couple of years and it really just amazes me how quickly women deplete their number one asset, which is their looks, where they will drink; they’ll smoke, they’ll eat crappy food, they won’t exercise, and they’ve got these few glory years that they just spend depleting that as quickly as possible.

You want to think of women as like this firecracker, very bright, very in their prime. They get a lot of attention, but it fades out quickly.

Whereas a man is more like this fire, coal that slowly burn and get brighter and brighter as he gets older.

Now of course as you get older, you hit your 40s, 50s, 60s, you’ve got to walk a narrower and narrower path to be very attractive to girls. For example when you are in your 20s, you can get away with more bad habits like drinking or not getting enough sleep or not working out.

As you get older, if you want to stay in your prime, you’ve got to walk a narrower path of good habits but it’s completely doable. But the point is that you have a much longer career, a much longer sweet spot where you can be attractive to girls. That works in your favor.

The other advantage that you have as a man is that you really have more choice than a beautiful woman.

It’s not in a woman’s social conditioning that it’s acceptable to meet whoever she wants. Usually because women get attention anyway, they don’t really feel that need to go up to people and they are afraid of being shamed by their friends, by their family, by men that they’re sluts so they feel a lot of fear about going up and meeting people.

So I want you to think of social sexual value as like a pyramid that has four rungs.

On the bottom rung, which is the largest group of people, are ordinary guys. They’re just ordinary. They’re nice guys, nothing wrong with them but they lack a lot of social and sexual value. They are the most desperate. These are the kind of guys that don’t do cold approach. They’re more interested in just staying in their comfort zone. They’re not really action takers.

Above them, which is the smaller group, are girls that are kind of like they’re not so attractive. They’re just average-looking women, maybe like the 5’s, the 6’s, and the 7’s if you were to rate girls from 1 to 10, and to some degree, they have more sexual options. They can just kind of passively glide through life and they will get laid, maybe not with the exact guys they want but they don’t really have to take any action to get laid and all these ordinary guys want to fuck her. For every girl in that second rung category that’s a 5, 6, or 7 in looks, there’s 10 of these ordinary guys that would love to have sex with them or wife them up or whatever.

The third rung, which is an even smaller group, are the girls that are 8’s, 9’s, or 10’s, the girl hotties, the female hotties. They have more sexual choices, more sexual value because they can kind of just choose any ordinary guy from that bottom rung and that guy will want to marry her or have sex with her.

On the top rung, though are the male outliers. These are the men that are go-getters. They take a lot of action, maybe they have a good career or business going on, or they’re really into sports, or they do cold approach. They have the opportunity to meet a lot of girls during the month. They have a lot of choice, a lot of options. They work hard on themselves. That is actually the rarest kind of person because for every outlier male that is very active and action taking, there might be 10 or 100 hot girls that want to be his girlfriend because he has a lot of options, he has a lot of choice.

That is actually the best place to be at the top of the pyramid, which is the man, and the man can actually transform himself into that super abundant, superhuman that really hot girls really don’t have the opportunity to do.

Okay so another way to look at this pyramid is that women occupy the middle layers. It’s almost like socialism where they can’t really reach that pinnacle, that top fourth layer of the pyramid but they’re not going to be at the bottom either. So it’s less risk to be a woman because even a woman that’s a 5, or 6, or 7 in average looks can still kind of passively walk through life and still meet a man because there are still going to be 10 ordinary guys on that bottom rung that want to have sex with her, so she can just passively glide through life and still find a partner.

Whereas men, for men it’s more like ruthless capitalism where if you are an action-taker, you can reach that top pinnacle and have more choice, more choice than even the hottie girls, even the prettiest girls be the guy that is so rare that there’s for every one of you, there’s 10 hot girls that want to be with you. But also if you’re not an action-taker, you’re going to be at the bottom of the pyramid. You’re going to be in that largest group at the bottom of ordinary guys that are just passive, don’t want to push their comfort zone but also have the least sexual options.

So instead of being this ordinary guy on the bottom rung, looking up one rung to the 5’s, 6’s, and 7’s of girls, or the third rung of the hottie girls, you want to set your sights even higher. Set your sights to that fourth pinnacle rung where the men are go-getters and action takers and are transforming themselves and are transforming themselves and have the most sexual options. You want to look to that top rung, you want to join that club. You don’t want to be looking at pretty girls and being jealous of them. You want to transform yourself, move yourself beyond that level, to that top rung, and then you’re going to have incredible amount of sexual options in your life.

So I hope I answered your question on that, Arnold, and to my general audience. If you like this video, please click the like button. Please subscribe and I will talk to you next time.