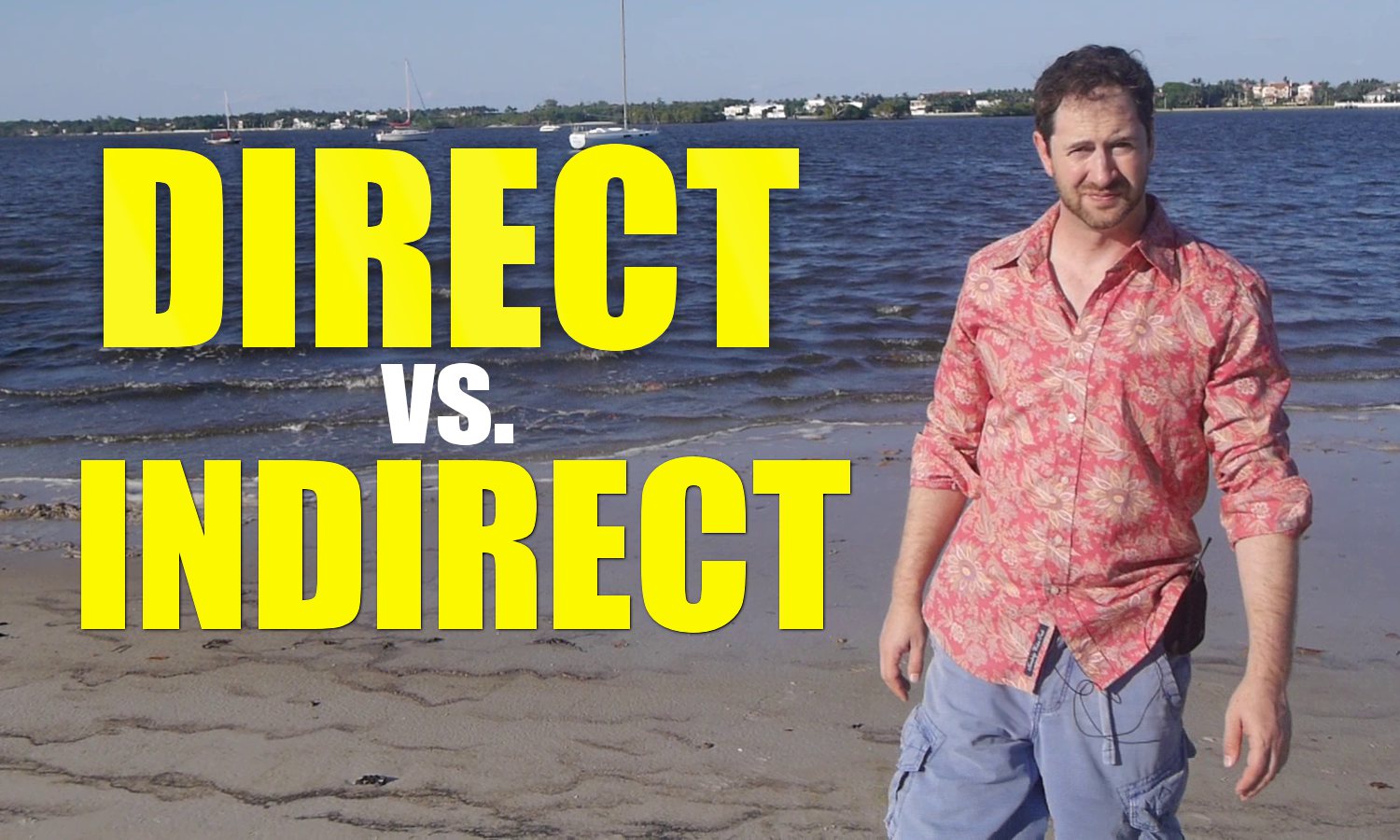 I want to talk about openers, specifically what are the best kind of openers to use on a girl to maximize your chance of getting a good reaction and turning that girl eventually into a girlfriend or just working her into your life of sexual abundance.

Now of course indirect openers, you are not directly conveying your sexual interest to the girl. An indirect opener could be asking her for her opinion on something, on anything, or it could be really, really indirect like asking her for directions, or any topic that is really friend-to-friend, really casual, and you are not conveying sexual interest to the girl directly.

A direct opener would be something more like a compliment. It could be something really simple like, “Hey, I noticed you. You are really hot,” or it could be, “I noticed you. I really like your style. I have to come over and say hello,” or, “You look absolutely adorable. I had to come over and meet you. my name is Jesse.” Anything like that where you are directly conveying your sexual interest to the girl right off the bat, that would be traditionally called a direct opener.

Well actually the answer is a little bit grey. I think the answer will surprise, so you want to watch all the way to the end of this video to get the full nuance of this answer.

Now a mistake that I see guys make a lot is that they don’t really feel entitled to the girl, so they’re really nervous.

They don’t feel like they deserve her, so they go to the girl and they use an indirect opener where they ask her for opinion or directions or something along those lines because it just feels safer. It feels more comfortable. But they never in the conversation pivot over showing interest to the girl.

They never show the girl that, “Yes, I have a dick and I am interested in you.”

If she responds well, maybe you could have a 5-minute, 10-minute, 15-minute conversation with her, but eventually things are going to die down and the girl is going to be like, “Wow! Really nice guy! Well, it was nice to meet you. Goodbye!” It doesn’t lead anywhere.

Or the guy will kind of swoop in, showing intent at the last second, asking the girl for her phone number. So it’s a purely platonic conversation.

A girl might give you a fake or phony number. She might say, “I’ll give you my email address,” but it’s not a strong close because it’s just he just changed going indirect for 20 minutes and suddenly going direct kind of doesn’t make sense logically.

Advantages of Opening Direct Right Away

Compared to the indirect, the direct opener like starting off directly with a compliment has a number of real advantages to it. I mean when you go up to a girl, you say, “Hey, you’re hot!” what does it say about you?

It says some pretty good things about you actually.

One of the benefits of the direct opener is that it says that throughout your life, you’ve gotten good responses when you went up to a girl and were like, “Hey, you’re hot!” It means that girls responded well to you in the past because if they didn’t, you wouldn’t feel entitled to be so direct. You’d feel scared. You’d feel nervous.

Another thing on your side is state transference.

If you feel very awkward, if you’ve been uncomfortable going up to a girl, you’re going to tend to make the girl feel awkward and uncomfortable in return.

Most guys are beating around the bush. They’re bottling themselves up. They’re stifling themselves. When you are just upfront, “Hey, I like you. You’re cute,” it’s refreshing. It’s nice. It feels authentic. It feels real. I can feel genuine you know it depends on when you’re coming from, of course, the emotions behind being direct but generally the girl will appreciate it.

It adds an extra sexual dimension to the conversation that’s going to make her feel attracted to you and just have a good overall buy that’s a lot more interesting that purely friend-to friend.

The other advantage, this is the final one, is that you know it’s a lot easier to set that frame in the beginning.

If you’re purely platonic all the way through the conversation and then you want to switch to being direct at the very end, “Hey, let me get your number,” it’s just not smooth. It’s kind of awkward. It’s a lot easier to set that man-to-woman frame right at the beginning and then you can go to platonic, then back. Spike it with more sexual stuff, then you go platonic, platonic, platonic. Then switch to being direct at the end. It just doesn’t work as well.

Now going indirect, hiding your sexual intent not letting the girl know that you like her, of course that feels a lot more comfortable. It feels easier. It’s not pushing your comfort zone as much.

But with those 100 girls you talk to, you’re not going to get into bed with any of them, so you are actually expending more effort, more energy being completely indirect and it’s not going to work in your favor.

That’s why I developed MESA, Minimal Effort Sexual Acceleration because the way that guys go about pickup, they’re expending so much energy. They’re tiring themselves out. They’re exhausting themselves. Guys will go up to 100 girls, be indirect in all those conversations.

They’re wasting so much time. They’re not getting anywhere.

Minimal Effort Sexual Acceleration is about optimizing your time in a way that’s going to get fast responses, good responses from girls in a very efficient, timely manner so that’s fun. It energizes you, and you make quick progress, and I’m going to talk more about MESA at the end of this video.

Then as soon as you sense a good reaction from the girl like her eyes light up or she’s got that big smile on her face, then you switch to the direct opener and that could happen within mere seconds even, so you’ll be like, “Hey, there! I need a female opinion on something ‑ by the way, you are actually really adorable.” I mean it could happen that fast.

What this allows you to do is calibrate to the girl.

Some women, the direct opener right off the bat is going to work really, really well. They’re going to respond right away.

Some girls, it’s almost like sensory overload. It’s too much. They actually need a little bit of comfort building first.

Maybe they are just not used to talking to strangers. That’s really weird for them, and talking to them for a minute or two minutes first, they just get more comfortable with your presence.

In that way, if you go indirect, you can usually tell just through experience doing it enough times if you can just switch to going direct within seconds or if you should talk to the girl for 30 seconds, or a minute or two, and just build a little bit more comfort and then give her the compliment. Then show the sexual intent to her.

The other advantage of that is that you can notice more about her or make that compliment more specific to her that you might not notice within the first couple of seconds.

That’s really more powerful actually than just simply going direct because it’s like you’re casting a wider net. You’re going to calibrate better to each girl and give her either that hard attraction right away or build a little bit of comfort for a couple of moments and you’re going to get better results.

Just to sum this up, you know opening direct works great. It can work really well.

Doing a false indirect can work even better because you are calibrating now to the girl, either building a little bit more comfort before you go into that attraction, and I would say kind of the worst scenario is you go indirect and then you have that 10-, 15-, 20-minute conversation to nowhere because you never pivot.

You never show the girl that you have a dick. You never turn it into a man-to-woman interaction. It’s purely platonic. It’s purely friend-to-friend. The conversation will eventually die down and the girl will just leave. That’s what you don’t want to happen.

But actually you really don’t want to have happen is not approach at all. Actually just going indirect, being friendly, being platonic, having a positive vibe, that can be great if you’re just warming up, or if you’re really rusty, you just want to get back into things. Maybe going direct right away on the first approach is pushing your comfort zone too far. It’s too uncomfortable.

Just having a couple of warm-up sets where you’re just friendly, relaxed, platonic, just warming up into things, just enjoying life, just throwing up a positive vibe, that can be great, too.