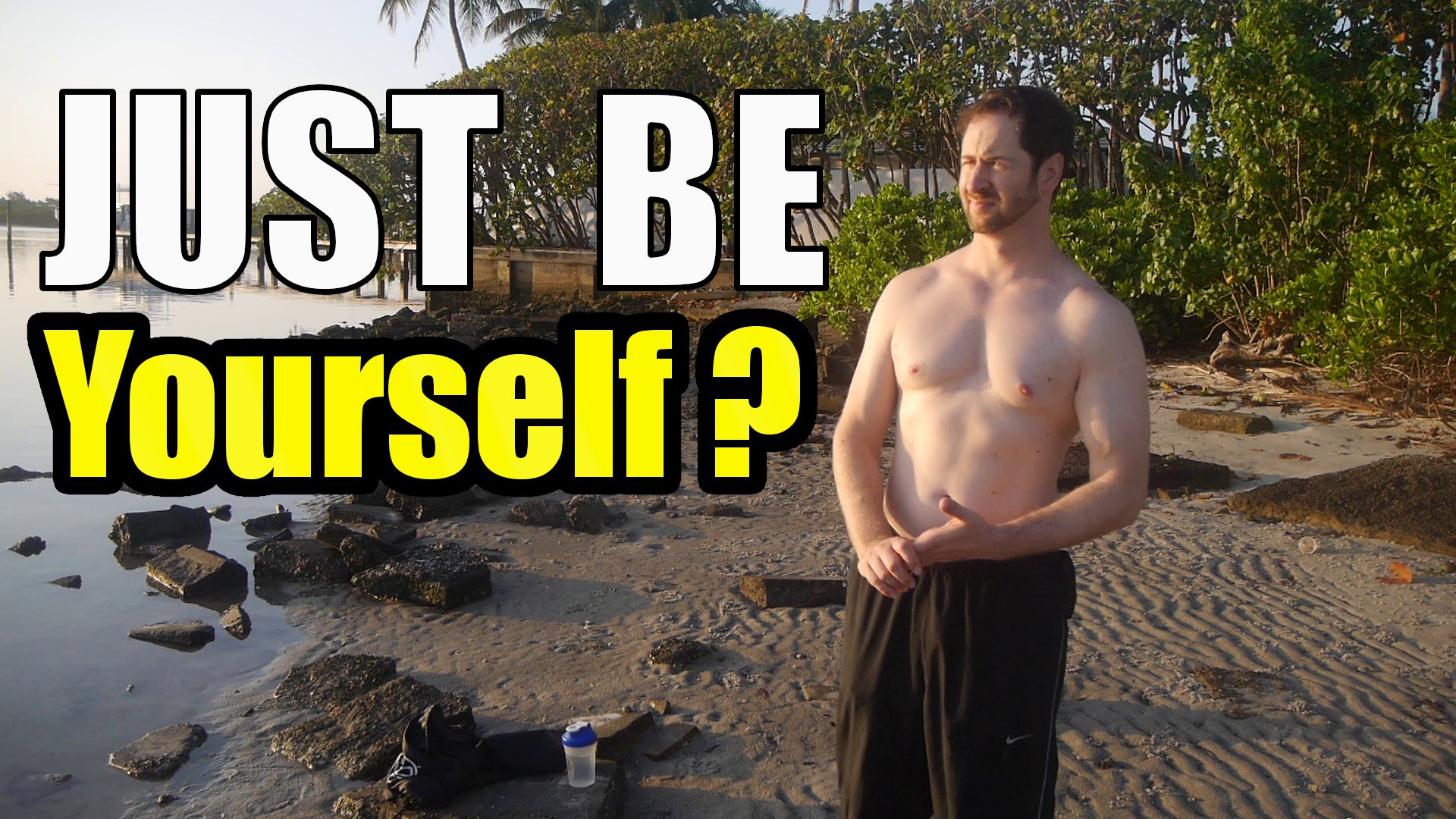 I want to talk about a really interesting phenomena and that is when you ask a girl for advice on how to get women, if you ask a woman, “so what is it about a man that makes him attractive,” girls with uncanny frequency will use the old cliché again and again, “just be yourself.”

I mean it’s almost ridiculous how many women will tell you that. they’ll tell you other things but they’ll often throw in just be yourself 3 out of 5, 4 out of 5 women will say that.

On the surface, it almost seems moronic because if you were just being yourself, you’d already have what you want.

If you want to have an incredible perfect 10 girlfriend, if just being yourself was able to accomplish that, you’d already have her.

Your professor says, “Just be yourself.”

So it sounds like the dumbest advice possible in the world. But there is a kernel of truth to this. You actually have to step inside the shoes of a woman and then it kind of can make sense why women will tell you this advice to just be yourself.

You got to look at it from the woman’s perspective. When you say to a woman, “What kind of guy is really attractive to you? What do I need to do to do well with girls? What are some pickup advice, so to speak?”

What Women Are Really Thinking

What a woman is going to do is she’s going to imagine in her mind a guy that she’s already really attracted to.

Maybe this guy has great looks. He has a great body. Maybe he’s a celebrity. He has a lot of social status.

Other women want this guy, or it could be a guy that she’s been crushing on for years and this guy is also probably a guy that she in a sense doesn’t feel entitled to have.

One thing you have to understand about women is that they are very aware of their own flaws. If you think you have a lot of flaws that you’re self-conscious of, women are three times worse. She’s going to be very aware that maybe she could lose a little weight around her stomach.

Maybe she admires people that are very active in sports, so she feels like she’s kind of lazy. There may be a lot of aspects of herself that she’s not that proud of, so if she’s imagining this perfect guy that’s way up here in status, and she imagines herself down here, she’s going to be aware of her own flaws.

She Wants Comfort With Mr. Right

So if she was giving advice to this high-status guy, how can you keep me, she’s going to say to him, “She wants him to make her feel extremely comfortable. He already has the attraction.”

Make me feel like I stand out from the other women.

Make me feel like I could be wife material for you because yes I’m really attracted to you.

I don’t understand why you would stick around for me. So you got to make me feel comfortable.

It’s going to make me feel like I have insider information about you that no other girl has will develop a unique connection, and then I’ll feel comfortable sleeping with you because I feel like you’re not going to have just sex with me and ditch me.”

But You Are NOT That Guy

But that’s why advice from women is typically useless because you aren’t the guy that she’s imagining.

You aren’t the guy in her imagination that has high status and high value and that she’s been crushing on for years. You’re the guy probably that needs to build attraction.

Maybe you are doing cold approaching and the girl you’re talking to knows nothing about you, or you are talking to a girl in your social circle.

Maybe she’s just an acquaintance and has a really friend-to-friend relationship and you need to build that attraction.

In those cases, “just be yourself” is not going to work. Instead, you need to focus from going if you’re just starting out having maybe un-cool aspects of yourself, things you do.

For example, you’re not leading. You’re very reactive. You’re very concerned about what other people think of you. You don’t get physical. You’re afraid to show that it’s man-to-woman instead of just friend-to-friend, so you need to kind of fake it until you make it.

How To Be That Attractive Guy She Wants

You need to go from being like to trying to adapt more of these cool aspects here to yourself and it’s going to unnatural at first. It’s going to feel uncomfortable at first.

You’re going to feel like I don’t belong here specially if your friends are just playing with just whack the body or hands, it could get really uncomfortable. It might not be that enjoyable.

At a certain point, then that advice of just be yourself can really apply because ideally when you go up to that perfect 10, you don’t want to be all up inside your head filtering what you’re saying, trying to come up with a perfect line, the perfect technique what to say to her. That’s very tiring and exhausting. That’s putting on a pickup persona.

The Right Things To Do

Instead, you want to be able to go up to the girl, be completely outside of your head, be relaxed, be chilled, and talk to her like another human being where you’re doing certain things like screening her, seeing if she’s right for you.

Instead of competing with her, it’s more like a win-win situation where you’re just very relaxed about it and you are both too high value people that are just talking to each other. In that case, you wanted to just be yourself.

There is a learning curve where just be yourself is not going to be useful at all. You got to be pushing your comfort zone a little bit each day. It’s going to be unnatural at first.

Just push through that and then you can get to that golden era where you can be more just be yourself and then that advice actually does really apply because now you are just assuming attraction.

You know that you can do well.

You know how to carry yourself.

You know how to hold yourself.

The attraction is already there, and then you can just kind of focus more on the comfort aspect, making the girl feel comfortable and then the “just be yourself” advice really applies.

Just a little food for thought kind of an interesting psychological aspect of women there.

Women Just Want To Be Bent Over And Have Their Hair Pulled!

Attraction Is NOT A Choice – Here’s Why