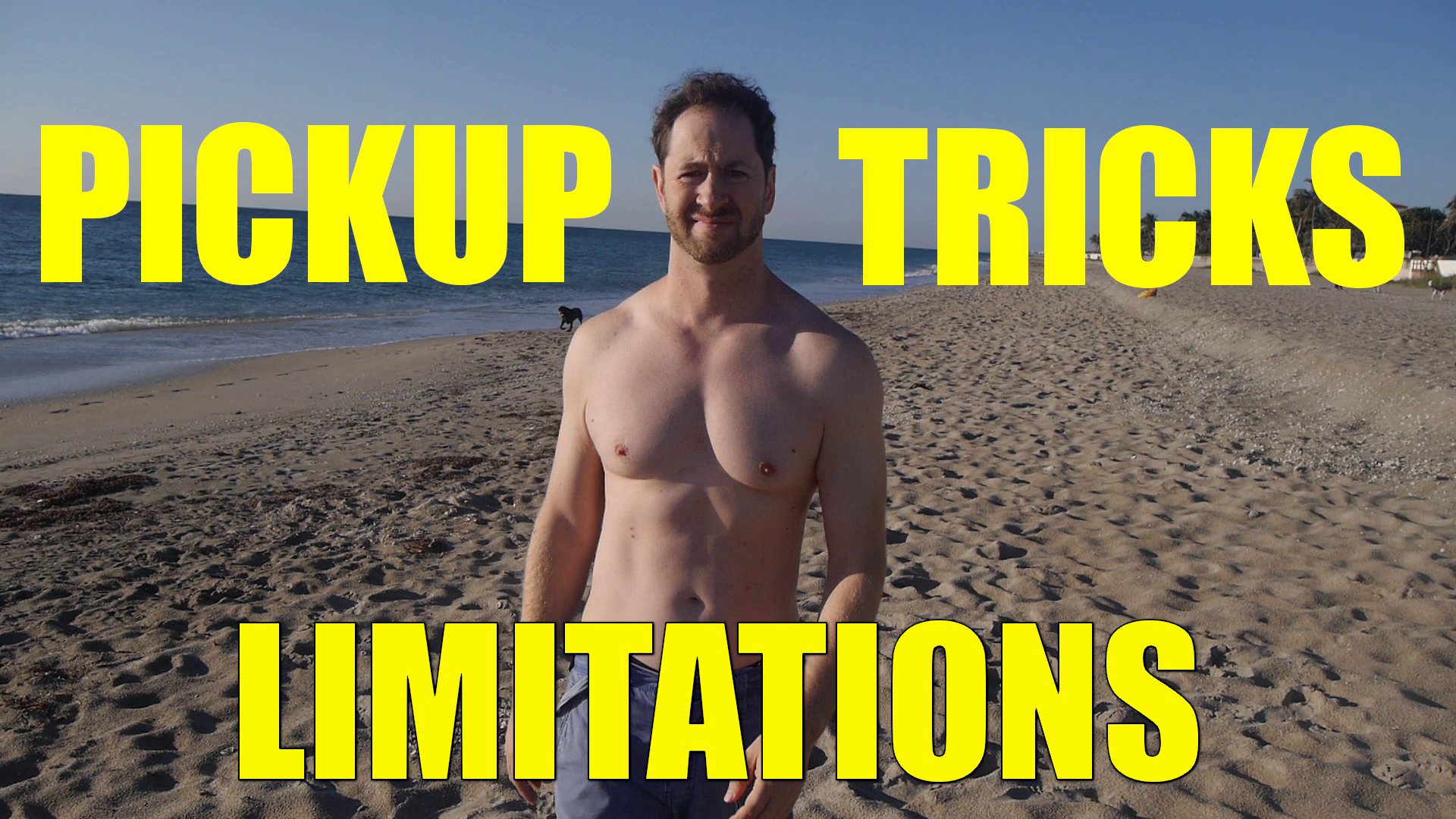 Because what happens is most guys they start meeting girls, and they make it so excruciatingly painful and exhausting and tiring that they only last a couple of weeks.

So we’re going to make a mindset shift where you are actually going to be energized and enjoy what you are doing.

You’re going to enjoy the long-term process of transforming yourself into the kind of guy that is fundamentally attractive to all women.

You can just go up to any girl and you can get a good response.

You can get her attracted to you at least a little bit, and some of those girls you’re going to have incredible sexual chemistry with and go home with.

The Limitations of Tricks, Lines, and Moves

Now I think that the mistake that most guys make is that when they get into pickup, it’s really about learning a trick or a line or a couple of moves that they can use on the girl like kind of push some buttons, get a particular response and get the girl to fall in love with them.

It’s a trick, a move, a line that they are grafting on to themselves, on to kind of what is a very shaky foundation.

Let’s take an archetypal example. A guy lives in his mom’s basement.

He plays these games, the MMORPGs all day.

He hardly goes outside.

Maybe he goes to work or school and comes right back to play games.

He has bad eating habits. He doesn’t work out.

He doesn’t feel good about himself.

Now he sees pickup and he’s like, “Okay, this is awesome because I can learn a couple of moves. I can learn a couple of tricks. I can leave my man cave, go talk to Suzie, use this trick on here, convince her to fall in love with me, maybe trick her to fall in love with me, or just push these buttons in this particular order. She will go home with me. I will take her home. I will fuck the shit out of her and then I can be done with this pickup shit forever. I can just go back to living my old life, my old habits, and now I’ll be happy forever because now I have Suzie.”

I think that’s kind of the mentality that goes through a lot of men’s minds. It might not be that extreme.

It might not be that black and white, but there is kind of the sense for a lot of guys that they’re just going to learn something really fast and then get the fuck out of pickup as quickly as possible and bring this new girlfriend that they just pushed some buttons to get with a line or a move, or a technique.

The Seductive Power of Magic Bullets

I think guys really get seduced by that idea that they can just learn like a magic bullet technique, which kind of makes sense if you look at our society in that most of our human needs or desires can be fulfilled by taking a pill or pressing some buttons.

For example if you are feeling sad and depressed, well there’s medications.

There’s pills you can pop that will kind of blunt that depressions and make you feel better.

If you are feeling bored, you can press some buttons on a little device called a remote and you can bring up thousands of entertainment options.

If you want to feel sad or excited or inspired or happy, there’s different programs that will deliver those emotions to you.

If you’re feeling hungry, well you can press a couple of buttons to fix that.

You can press some buttons on your telephone and a guy with a gigantic pizza of cheese and bread and sauce will appear at your door and it tastes absolutely delicious.

You know we are kind of used to society providing quick fixes and entertainment and good emotions by pressing a button. So you’re feeling lonely, you want some sex, you want a girlfriend, it’s kind of logical to conclude, “Well, there’s probably some buttons I can press for that. I don’t need to make fundamental changes to myself. If I’m hungry, I can just order pizza, so why can’t I just order a girlfriend?”

You know it sounds a little bit ridiculous when it’s spelled out like that. But I still think a lot of reasonable guys kind of do have the sense that it’s about treating the girl purely as an object, pressing the right buttons, saying the right things, making the right move.

The girl will come and sleep with you and you will be happily ever after because that’s just how society has trained us.

The Me Vs Them Frame

Now there’s major, major disadvantages to having this kind of mentality of just wanting a quick fix and pushing the girl’s buttons.

First of all, it creates this “me versus them frame” where you are in competition with the girl because you are seeing the girl herself as just getting in the way of what you want.

You’re really attracted to this girl, but she is the obstacle.

She is the one you have to fight with, go to war with to win her over.

Hopefully you can win her over if not she’s probably a bitch or you lost and she won. It’s not a win-win situation.

It’s a “I could lose” the situation, and the person that’s going to make me lose is the girl herself.

First of all, it’s just tiring. It’s exhausting. It’s stressful, and it sends out the wrong kind of vibe to the girl.

Second of all, just because you learn a cool move, a cool technique doesn’t mean that you’re going to be entitled.

Most guys don’t feel entitled to be even talking to that hot girl so that you’ll learn some tricks and techniques.

It’s almost like they put the tricks and techniques out in front of themselves, hold that up to the girl as a present and say, “Okay, I’m not entitled to have you but maybe what I’m putting forth here that’s separate from myself, that I learned from the Internet. These other things that are not part of me maybe that game is entitled to you. Maybe this game is entitled to have sex with you.”

So she’s still going to get a sense of you.

Your true self is still going to shine through those moves that you’re making, so if you don’t feel entitled to have her, even though you could be saying cool things, doing cool moves, it’s almost going to be like a nerdy guy again is doing these tings that a cool guy would say or do.

If you don’t feel entitled to have that girl, even if you have some cool techniques that make her giggle and laugh, or give her some good emotions, when she shit tests you, you are going to crumble inside because you’re on this extremely shaky foundation and you’re going to feel like she is rejecting you or you’re just to want to run away and hide in a corner because you so badly want her to like you, any little shit test will feel like this devastating rejection when it’s not a rejection.

You Won’t Be Able To Keep Her

Fourthly, you’re not going to be able to keep her, even if you could magically get this girl into bed, she’s going to see through the game that you’ve learned to make yourself a cool guy for 5 or 10 minutes.

These will be very unattractive qualities you would be chasing her away. You would be pushing her away just through your needy behavior.

Just grafting on some techniques is not going to give you the results that you want.

Why Deeper Transformation Is Great

Now the reason that I was attracted to pickup back in the day, why I found it so fascinating and interesting was not because I saw it as some quick tricks or moves I could just kind of graft on to myself, get the girl, and then have nothing to do with pickup again.

Instead of just staying and clinging to my comfort zone, by learning a trick and not pushing myself at all, I saw pickup technology as this incredible thing that kind of gave me permission to push my comfort zone a little bit every day.

They add some spice to my life.

Do that by putting a small amount of pressure on myself every single day, pushing my comfort zone, being slightly uncomfortable, and being able to grow into this better human being overtime.

I would highly recommend that you make this mindset shift from just learning some techniques and you just want to get the girl and then get out of pickup as fast as possible and instead make a lifestyle choice.

That’s how you are going to look good.

That’s how you’re going to build a fantastic body.

That’s how you want pickup to be not some little tricks, not a few moves that you’re grafting on to yourself so you can go back to your old habits, but it’s a way to make a fundamental transformation.