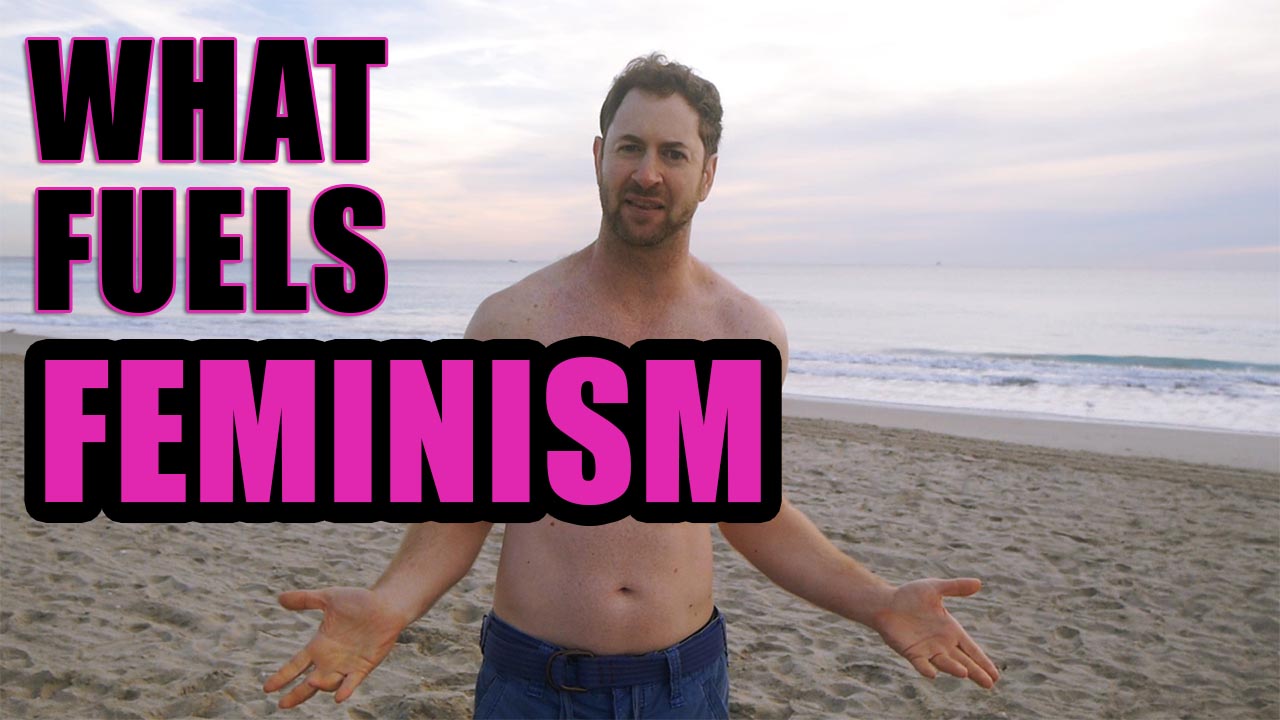 What Fuels Feminism – And How Men Can Take Advantage

I want to talk about the origins of feminism, where it comes from, and what’s driving it, you know that women have property rights, that they can vote, that they are in the workforce more than ever, that they’re putting off having children, that they might be more promiscuous when they’re younger, that they have less religious values than they used to, that they’re demanding more equal rights compared to men.

Where is that coming from?

It is coming from social justice warriors or feminist activists, or is there something deeper driving that trend, that phenomena?

Capitalism and Feminism Are Deeply Intertwined

Well in my opinion, the biggest driver of modern feminism is actually modern capitalism. For example, in World War II, tens of millions of women left being homemakers and went into the factories to build guns, to build bullets, to build tanks, to build weapons because all the men had left and we’re up overseas in Europe fighting in the war. Then once the war was over, a lot of the women just stayed in the factories and suddenly it became socially acceptable in war for women to work, and this is perfect for capitalism.

Capitalists, the guys who run the companies, love this. Just think about it: in capitalism, you want as many consumers as possible. If you’re selling toothpaste, you want each family unit to be earning more income so you can sell as much toothpaste as possible.

If you are selling funny little knick-knacks, you want families to have more money to buy your knickknacks, or say if you are selling luxury cars like Lexus and BMW automobiles, you want every family to be able to afford one of your cars or even two cars.

So, if women were to suddenly leave the workforce, family incomes would take a drastic drop, companies wouldn’t be able to sell as much. It would send the economy into like a huge recession where there’s not as much demand for any of the products out there. Companies would have to cut back. They’d have to fire more people, and you would go to an earlier era of capitalism where people just didn’t have the money to afford very many luxury goods. There would a huge slowdown on computers, on smartphones, on luxury cars, on everything that we are used to have.

So capitalism is a main driver of keeping women in the workforce.

Capitalism Is The Driver Of Liberalization

Karl Marx back in the 1840s, one of the reasons he’s kind of considered a genius for his time is that this is something that he foresaw. He foresaw capitalism as actually being an incredibly liberalizing force, and that’s a mischaracterization of Karl Marx is that he was just against capitalism and he hated it, which is not true.

He saw capitalism as a liberalizing force that would bring all people into the workforce. It would turn all workers into commodities of labor, and pull women into the workforce, pull minorities into the workforce, equalize everybody. He didn’t speak of — the word “feminism” didn’t exist back then, but he described that process pretty much before anyone else saw it.

Basically, if you are not a fan of feminism or you want to go back to an earlier time where women were more obedient to men and they were more homemakers and they didn’t sleep around as much, they don’t sleep around as much when they’re young and they’re motherly. I mean then that’s not really something that’s being driven by feminist activists and social justice warriors as much as it is being driven by the underlying forces of capitalism itself.

So to roll back feminism in a big way would almost be like saying I want to roll back capitalism and go back to a feudalistic or agrarian time. That’s simply not going to happen.

A second huge driver of feminist values actually comes from a large group of men and that’s fathers. Now if you’re a young, single guy, I could see the appeal of disliking feminism because maybe you could come from the angle of you think that women should be more obedient to men, more subservient, men should have more control in relationships, etc., etc. To make sense, it could theoretically be in your genetic interest but not all men share the same genetic interest.

For example, as a young single guy, you might find it really titillating and exciting to go to a strip club and you’re just kind of seeing the women there as sex objects that are titillating you.

But if you’re an older guy and you are the father of three young daughters, you might not see strip clubs the exact same way.

You might go there and feel the titillation, but you feel this conflict of values like you wouldn’t want to see your daughters up there or you will feel more like guilty about it like you don’t want to see these women exploited, not always but there is just a general tendency for that.

In the same way, an older guy with daughters, even if he says he doesn’t like feminism, he’ll probably be raising his daughters like feminists.

He might say I’m against feminism, but then the girls are watching maybe certain Disney movies where the lead role is a woman and she’s very independent and it’s almost the caricature of a feminist and he will just be okay with it like he won’t think twice about it. He wants to instill those values into his daughters because he feels that by instilling feminist values in his daughters, he further s his own genetic interest.

Basically, a father’s genetic interest is not going to be the same as a young man who just wants to sleep with as many women as possible. As a young man, you see a pretty young girl and you just want to bone her. You want to put your seed inside of her.

But the father, he doesn’t want you to put your seed inside of his daughter. He will probably look at you very skeptically and just assume that you’re a scheming douche bag that wants to impregnate her and leave or that you would impregnate her and be a scrub like you wouldn’t be a man of very many resources to take care of the children.

Different groups of men are going to have different genetic interests and there is that struggle there. There is that genetic struggle and survival of the fittest.

Solution #1: Go With The Flow

Okay, so what does all this mean?

It means that you are not going to roll back feminism by fighting social justice warriors or feminist activists.

Even if you could make a father consciously say, “Yeah, I am against feminism,” he’s still going to raise his daughter like feminists.

So you have a couple of really awesome solutions anyway for your own personal sanity. First, you can just go with the flow. I mean in one sense, it’s never been a better time to be alive. You can start up a little Internet business. You can go traveling. This liberalization of women can really be in your interest if you are interested in meeting a lot of women, if you are interested in having fun, meeting a lot of girls around, experimenting sexually with a lot of different women.

A lot of people go that route and they can live some pretty awesome lives and then eventually they meet a girl that they really match up really well with. They’ll get into a beautiful relationship with that person.

Another way to do it is just recreate that pre-capitalist era lifestyle like the 1930s, the 1940s where you find a woman, and you can basically shut out all modern influences. You can go to a small town or out into the countryside, and if you want to live with those pre-feminist values, those pre-modern capitalist values, you can just get rid of your television, you can get rid of your Internet, you can get rid of movies, modern-day movies, just like as it was back in the 1940s. Back in the 1930s or 1940s when life was simpler and women weren’t being influenced by modern capitalist values of being a consumer and having these feminist values. You didn’t have television. You didn’t have the Internet, you didn’t have media right at your fingertips. You didn’t have news sensationalism and all that stuff, so you can cut that out.

If you feel that’s a good thing where life was very simple and women bore children early and they didn’t have temptation from other men. It was like a different simpler culture. You’re going to have to live like that where you have less income and you don’t have media at your fingertips.

So if you want to live like that, you got to take the good with the bad. You’ve got to accept how it was back then. So you have a couple of options at your disposal.

Feminism Would Thrive *Without* The Feminists

The big point of the video though is that you don’t want to get caught up in having this anger towards women, towards women are feminists and social activists, and social justice warriors, and they’re ruining modern society because that’s simply not true.

It’s baked into capitalism itself and there are huge groups of men like fathers that also benefit from that system.

There are also young men that benefit from that system. They can travel around. They can do pickup. They can meet lots of girls, and they enjoy that system as well. They enjoy modern capitalism, all the conveniences of it, and meet even more sexually liberal women.

So if you get angry about that and frustrated about that and you’re living in that frustration, then that’s going to make your life miserable and unhappy and a lot of game is simply what you project. So if you are projecting anger at women, you’re going to get bad responses from women. It’s kind of like a self-fulfilling prophecy.

So it’s really a bad road to be going down. Again just go with the flow of things and if you really don’t like that, you can change your lifestyle to go back to a simpler time. Get rid of all your media devices. Get rid of your television. Throw out your Internet connection. Go to a small town. Go to the countryside and you can build whatever lifestyle you desire for yourself.