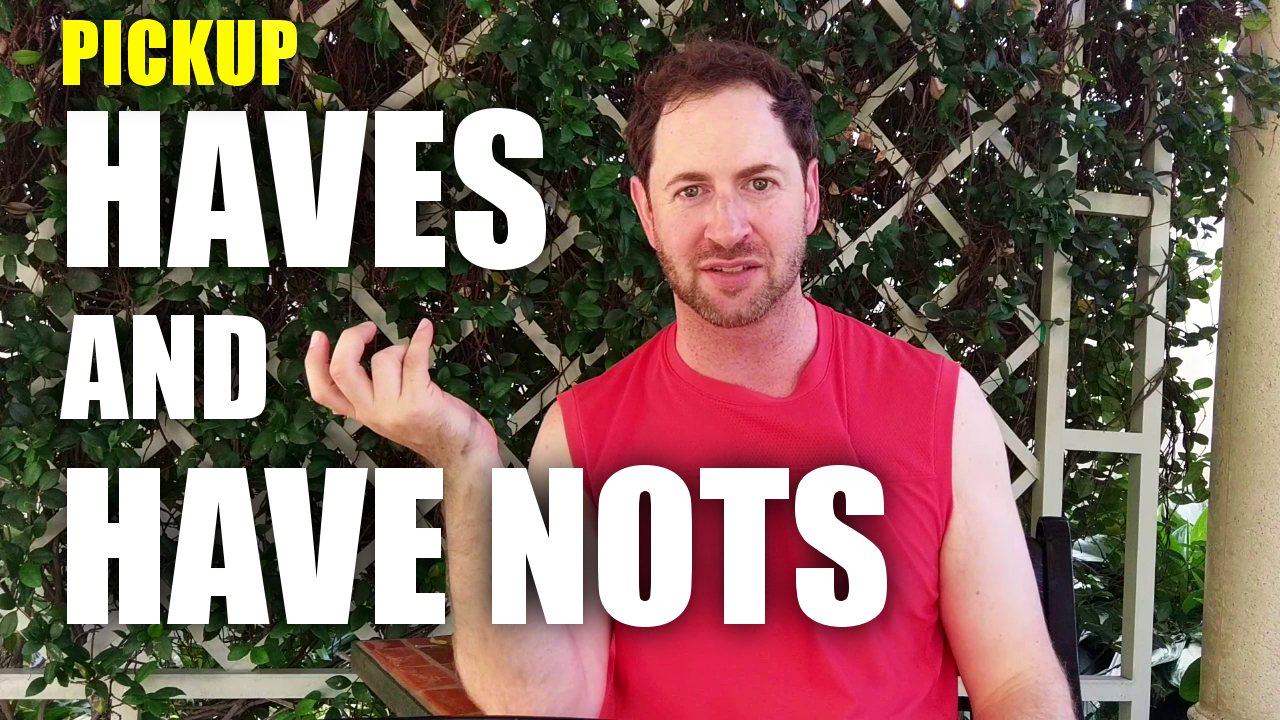 Why Pickup Creates Both Winners AND Losers

I want to talk about pickup technology, tactics, and techniques are actually creating a larger and larger gap the haves and the have nots ‑ a small niche of guys at the top of the pyramid that are getting more girls than ever, that are living in sexual abundance and the rest of men that have not actually seen much of an improvement in their lives if at all and are still living in sexual scarcity, in fact probably more sexual scarcity than ever before.

Why? This pickup technology actually increased the gap because you would think that with all the tactics, example videos, technology out there that people all men, all boats would be lifted.

That’s kind of what I thought back when I started Seduction Science in 2002 and before that when I discovered the pickup community, which back then was like this really underground esoteric knowledge. You really had to go looking for it and the technology was really primitive.

But even back then at the time, I thought, “Wow! This technology, primitive as it is, has the capacity to change the world.” When this information gets out and all men have access to this, you’re going to like a flowering in masculine energy. Men are going to be able to teach themselves how to be more sociable, how to be cooler, how to dress better, how to look better, how to lose weight and just be cool guys, attractive men, which is good for women, too, because women want to meet attractive men. But of course it didn’t really work out that way.

What actually happened is you have a couple of guys, a small niche of guys that run with the technology, that take massive action, that push the boundaries and of course they reap all the rewards, and they are taking these women off the market. Whereas most men, they are either not interested at all like, “Oh, that’s not for me. That’s just not me. That’s not who I am.”

So they brush it off, or they might learn a little trick, a little tactic, but they don’t follow through. They don’t take massive action, or they just want like a magic line, a magic bullet, but they don’t really want to change themselves. They don’t want to make any kind of fundamental changes. Those are they the guys that are left behind.

It goes for women as well. You see, as mass consumer makeup becomes cheap and available to all women, as any woman nowadays can go on the Internet and learn how to lose weight very easily, very cheaply, gyms have proliferated throughout the country.

There’s a small group of women that have taken advantage of that. There’s a small niche of women that are just looking more attractive than ever before, ever in history because they have cheap makeup at their disposal. They have gyms at their disposal. They have the technology and the knowledge to eat correctly and just keep these incredible bodies look like they’re 16 even into their 30’s and 40’s. Some women take advantage of that. They rise to the top. They become the haves.

It’s like that with any kind of new technology.

Back when the Internet exploded on to the scene, back in 1995, people were thinking, “Wow! This is going to change the world.”

Indeed, it has changed the world but not quite in the way that people thought. People originally thought it’s going to be a flowering of humanity.

You’ve seen a small group of people that have harnessed the power of the Internet to their benefit, starting businesses, creating value, becoming more knowledgeable than ever, being able to improve their lives in amazing ways.

They haven’t necessarily seen their lives improve. Maybe they’ve seen comfort. Maybe they’ve had increases in comfort. They’re getting these pins of pleasure from the Internet, but you’re having this gap open up between the haves and the have nots, the people that have harnessed the power of the Internet to their advantage and people where the Internet has taken advantage of them.

Another example would be like giving everyone a universal human wage like let’s say we’re giving everybody $3,000 just for being alive.

Now on the one hand, you could make the argument, you would see the flowering of humanity. With that extra time, people don’t have to sell their labor anymore. They have all day free.

You can see an explosion in science, people looking for the cure of cancer. People pushing the frontier of going to Mars. People solving maybe the global warming problem, on and on and on and on, creating new medicines.

Maybe some people just specialize in throwing parties and we’re going to have incredible parties like never before because people now have all this free time.

Of course, there’s going to be a niche of people that would do that if given the tool of having $3,000 a month to play with and not having to go to work.

But on the other hand, what would most people do with $3,000? They will use that $3,000 as if it were a drug. They are going to directly take drugs. They’re going to, instead of watching a couple of hours of television a day, distract themselves all day watching television, getting lost in virtual reality environments, probably pretty soon in the next couple of years just doing silly stuff, not living up to their full potential, not creating value for society.

With the universal human wage, again what would you likely see?

Most people that would just squander the $3,000 where the $3,000 instead of controlling it, it controls them. It becomes a drug to them.

With pickup, again you’re seeing a difference, greater distance between the haves and the have-nots.

Basically the choice is yours. We live in an incredible world where it’s more possible nowadays to do anything. The question is are you going to be taking advantage of it?