This is an incredible tip for really upping your results with girls.

Now I know that guys have big dreams when it comes to women. They want to have that perfect 9 or 10 girlfriend ‑ that loyal, loving girl that treats them well who’s beautiful and smart and all that, or they just want to get a lot of experience under their belt. They want to meet a lot of different girls that they can finally pick that one girl that’s right for them or they want to get a little harem going.

That’s all great, but what I found is that guys don’t stick with it for a number of reasons, but there is one particular reason in particular here specifically that really fucks guys up, and you can avoid this pitfall with one simple tool that you can get at any drugstore or supermarket. It’s very cheap, but with this one simple tool, you’re going to see your results skyrocket.

If You Don’t Have Condoms

Now here’s how it usually goes down. You meet a cute girl. She’s really into you and you get her back and you have sex with her, or you’re about to have sex with her, right? Then you realize, “Oh, fuck! I don’t have a condom on me. Well, I really want to get this experience. It’s going to feel great, so I’m going to fuck here anyway without the condom.”

Or you’re about to insert in it, and you’re thinking, “Okay, I got to put that condom on, but it’s over in the other room. But I don’t want to break the momentum. I don’t want to go over and get that condom and stop everything. What if she starts to throw up some resistance it feels really awkward? It’s going to feel really great having this sex without the condom, so I’m just going to jam it in. I’m just going to jam it in a couple of times, three or four thrusts.”

Then pretty soon, those three or four thrusts become 20 thrusts, and then you end up not using the condom at all.

What happens is that you get this spike of pleasure when you’re having sex with a girl without the condom. At the moment, your brain is kind of telling you, “Man, this is the best decision you’ve ever fucking made,” because this is fulfilling your genetic potential. You could theoretically have kids. You could pass on your genes.

That’s your caveman brain talking to you. “Well, this is incredible. This is awesome!” Even if the girl is not great, right? Even if she’s a 6 or 7, having sex with that girl feels awesome.

But what happens? The next day, you start worrying. You start stressing. You start thinking to yourself, “Okay, what I got this girl pregnant? I pulled out but what is some of that sperm leaked in?” Or you start thinking to yourself, “Maybe I caught a sexually transmitted disease, who knows? I don’t really know this girl. How many guys has she slept with?” You start running through all these scenarios in your head.

Then maybe you have sex with a couple of more girls, three or four more girls because you’re starting to reach intermediate stage, you’re getting some success, and again you’re not using the condom. Now you’re getting these spikes of incredible pleasure that last an hour or two, or who knows, maybe 15 minutes, right?

But you’re carrying on more and more stress, more and more burden on your shoulders that can last for weeks and months, and pretty soon tat amount of stress and worry and negative feelings is far outweighing the positive feelings. You start associating negative stress, worry, terrible feelings with having sex with new girls.

What happens is that guys drop out. They don’t want to do it anymore. You ask them why and they’re like, “I’ve just evolved beyond that position. I thought it was fun at first, but it was not fun as I thought. I’m just not liking it like I used to. It’s really not for me. I thought it was for me, but it really isn’t.”

What condoms basically do is that they even out the experience. They create a more Zen-like experience. You’re not going to get that incredible spike of pleasure for that first hour, but you’re not getting to get all that negative feelings, all that burden, all that worries coming down on your shoulders like a ton of bricks, so it kind of evens out the emotions: you don’t have that spike, but you don’t have the spike of lows either.

The reason I’ve been able to do this for 15 years and the reason why a lot of guys are able to stay in and achieve their dreams with women, stay in it for a year or two or however long they want is because they’re using condoms and they’re creating a sustainable ecosystem for themselves.

A sustainable ecosystem is for example getting enough sleep. You can pull on an all-nighter, get more work done in a moment. That’s good in the short term, but in the long term, it doesn’t help you because your sleep cycle is fucked up for the whole next week or you see a big giant pizza and you just chow down that pizza, the entire pizza for lunch.

Creating a sustainable ecosystem is about making choices and decisions that is going to help you last for the long term like going to the gym, eating vegetables, eating a nutritious diet, doing affirmations, only feeding your mind with good thoughts, not watching like crap television, or drama, or controversy, or jealousy, or stupid things on the Internet that don’t really contribute to your life and just feed you negative emotions.

You’re creating a positive ecosystem for yourself to create sustainability so you’ll continue to feel motivated and inspired to go out and meet girls.

Wearing condoms is an essential part of creating a sustainable ecosystem for yourself. That has to be in there. Most guys don’t consider that as part of creating a sustainable ecosystem or a healthy lifestyle, but it’s absolutely critical to last; otherwise, you’re going to associate all these negative feelings with sex, and you’re going to give up. You’re just going to bow out very quickly. 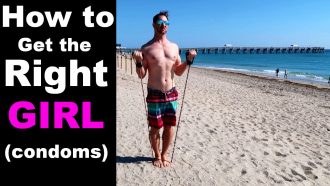 My 5 Essential Rules For Finding Happiness – The Easy Way! 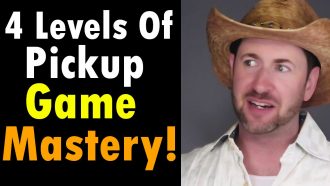 Create Moments of Distress and Anguish To Get The Girl 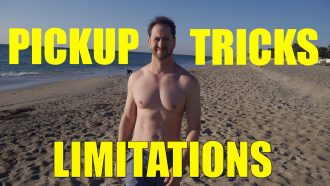