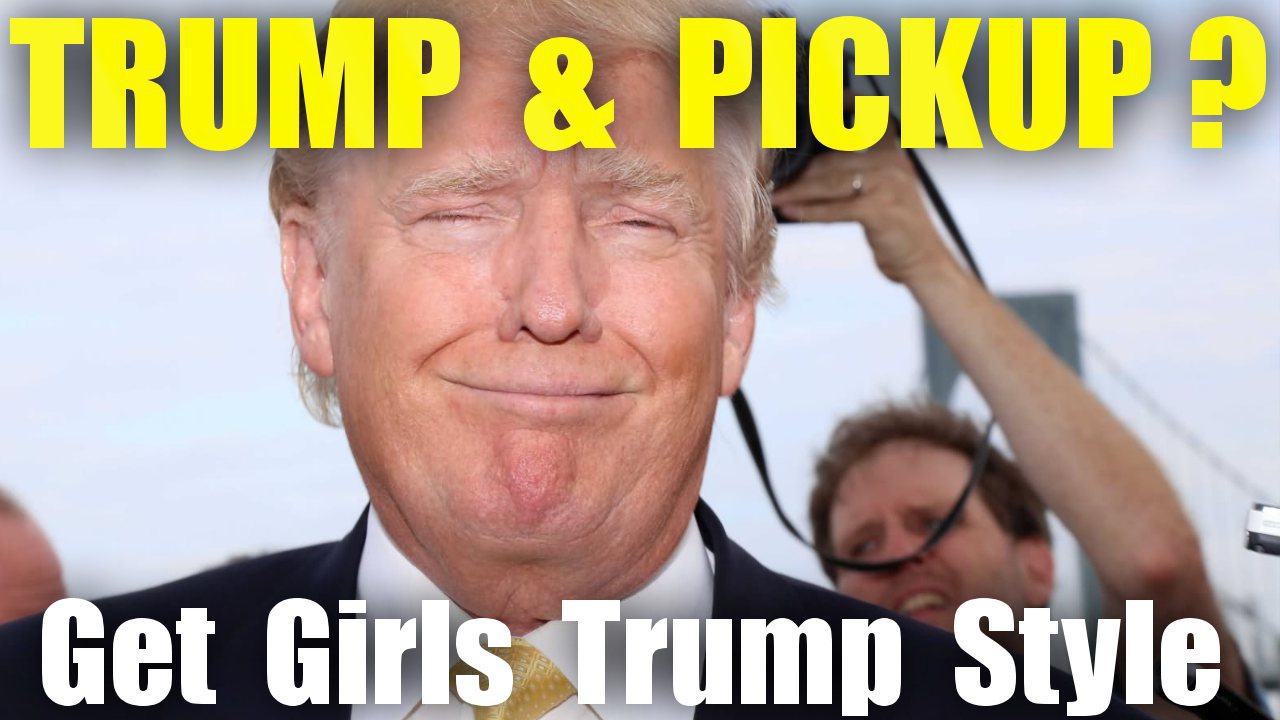 Question: “Hey, Jesse! Is Donald Trump the real alpha male? Is he someone good to model after for getting and attracting women?”

This is a pretty interesting question.

Actually, it brings me to a story about a man I was coaching one-on-one in Miami. What was really interesting about this guy is he could just go up to girls, and he didn’t give a fuck. He didn’t even have any approach anxiety at all, which is kind of a rare trait. I’ve seen this in a couple of guys. I’m talking about 1 percent of guys. Most guys will have at least some approach anxiety. He didn’t have any. It wasn’t because he trained himself to do that. It was just based on who he was, just natural.

He would go up, and at first he would garner a lot of attraction from the girl because he would just go up right in their face, and he came across as really ballsy and confident, but as time went on, as he was talking to the girl, the girl would lose attraction for him.

He would just go right up, start talking at her, and just be lost in his own world without having any connection with the girl, without sympathizing with her point of view, without really wanting to get to know her or caring about her.

A little bit of approach anxiety that you can get can really be a good thing in a way and will make you calibrate and care about the girl, care about her as a person. When you lack that kind of empathy, you can come across as cold, dark, uncaring like you just see the person as this object or a tool to be used, which brings us to Donald Trump, right?

I mean Donald Trump certainly has certain alpha characteristics but he’s not necessarily the guy that you want to model or mimic after.

What NOT to Model About Trump

First of all, he bragged about sexual assaulting women, so unless you are a rich billionaire that can afford to sue people, bully people, put people down, just put a lawsuit in front of people, that’s probably not something that you want to be doing as your pickup method is almost sexually assaulting people, or talking about that is definitely something you want to avoid.

But more than that, Donald Trump kind of has these characteristics like my buddy that I trained where he lacks sympathy, he lacks empathy. For one, he kind of comes across as a bully. He punches down at people rather than punching up. Punching up would be like making fun at the rich and famous and powerful.

He does that some, but he also punches down. He punches down on people that are weaker than him, that are far less powerful, and he just comes across as this unsympathetic kind of repulsive person sometimes.

He kind of sees persons as objects or tools to be used. Ideally when you go up to a girl, you want to kind of fall for something about that girl. You want to pick some trait that you really like about her. You don’t want to just see these girls as numbers like if you’re going up to 10 girls, it can start to come across as really robotic and uncaring to the girl if you just see her as number 9 of the day. You want to see her as a real human being.

You kind of get the impression with Donald Trump when he’s dealing with people or talking about people as that he just sees people as objects or tools to be used. One thing about Donald Trump is that you never really see him laugh at himself or take a joke. Senator Al Frankton made the observation that, “You do see Donald Trump smile, but you never see him outright laugh.”

He kind of lacks this playfulness quality or this ability to kind of mock himself. He’s got such a big ego, he takes himself so seriously. That’s something that can come across as unattractive to a woman when you just see yourself – it’s good to see yourself in a narcissistic light, but you also want to kind of be able to make fun of yourself, not take life too seriously, kind of have a laugh, have a laugh at your own expense even.

Another thing is that Donald Trump is never wrong, right? Even when he makes a lie or he’s just wrong about something, he’ll never admit an error. He’ll never apologize, and he’ll even double down on it by making up an even bigger lie or an even bigger fib, or just an even bigger spectacle.

You Need Calibration, Not Just Confidence

Now it’s good again to have confidence in yourself but let’s say you go over the line with a girl like you say something that maybe comes across as a nag or insults her a little, you can always apologize to her and just walk it back.

You want to have that quality of being able to calibrate to the girl, empathize with her, sympathize with her, feel how she’s feeling, if something is going off a little bit, or maybe you’re getting too direct, too sexual with her to be able to just take a couple of steps back. That seems to be a quality that Donald Trump would be lacking. It’s not something you want to model.

Donald Trump is kind of a braggart, right? That’s not necessarily a quality that you want to have. You want to be showing innate talent like if you have a hot sports car, you don’t want to be telling the girl, “I got this incredible sports car…” just talking about your sports car, your expensive car that you bought. That can be a very unattractive quality to a girl when you’re telling.

Instead you want to be showing like you don’t want to mention the sports car until you actually get her and you need to drive someplace, and you just walk her over to the car, and you don’t make a big deal out of it. You don’t even mention it. She just sees that you have the car like you weren’t trying to impress her with it.

You have to create attraction, but you also have to create comfort. you have to calibrate to the girl. If you’re just all up in her face, bragging, getting physical, and she gets uncomfortable, you don’t adjust to things, you’re going too fast too quickly, you’re not adjusting to the girl, that can creep the girl out. That’s kind of something you don’t want to be modeling in Donald Trump because the guy comes across as a sociopath that doesn’t have feelings for other people. At least in public, that’s how he comes across.

“Oh, you like that romantic movie, The Notebook? Yeah, I cried during that movie. Oh, it really, really moved me.”

I think that’s the lesson that you want to be taking away from this is that it should definitely be a balance.