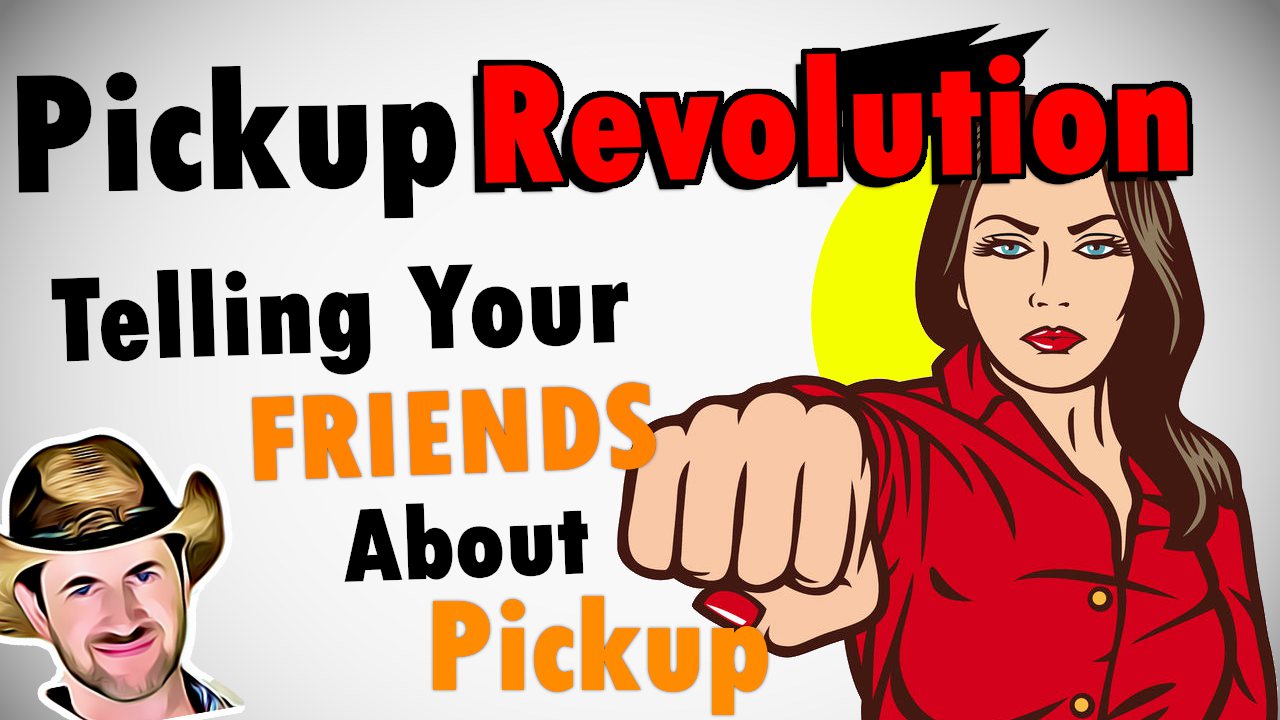 Should You Tell Your Friends About Pickup? | Pros and Cons

Imagine your opportunities, my friend, if your buddies and pals were top of the 1 percent and that incredible network that you can leverage to your advantage and have the social circle of awesome dudes that have each other’s backs and from whom you can learn from and rely on.

Now there’s two major paradigms that you can be coming from in terms of learning how to be an attractive guy to cute girls, to be the kind of guys that girls want to hook up with.

“Fuck my friends! They don’t need to know what I’m up to. Anyway, it’s their responsibility to handle their own lives, not mine.

In fact, the less my friends know about this stuff, the better because I don’t need more competition.

If they want to be idiots, let them be idiots. That’s more girls for me. In fact, if people want to be lazy or if they want to play video games all day, or they want to drink alcohol, or smoke weed, or they just want to chase girls in their small social circle and creep those girls out, so what? Again, less competition for me, so fuck them.”

“Anyway, even if told my friends about what I’m learning, they’re just to think it’s weird. They’re not going to understand.

They might not want to hang out with me anymore, or they’re going to feel threatened because they don’t want me to change, and that’s a headache that I just don’t want to deal with.

This is my self-improvement journey in this box, and my pals, my buddies, my friends are over here in this box separate and the two shall never meet.”

Going Alone Has Its Advantages

There’s a legitimate case to think exactly like that. I’ve always thought that way myself where I just thought, “Look, you can lead a horse to water, but you can’t make him drink.

Look, from a practical standpoint, this is a good attitude to take. You can’t expect to get any of your friends on board and support your journey.

You can’t expect they’re going to want to receive any help from you or help you in return.

But consider, just consider for a moment, my friend, another way of going about this, and this is some higher-level shit to consider.

I just want to talk about a concept popularized by V.I. Lenin for a second, Vladimir Ilyich Lenin. He was one of the leaders of the Russian Revolution back in the early 20th Century where 100 years ago, he led this ragtag band of rebels where the workers in the factory were rising up against the czar and the deplorable working conditions in Russia.

Lenin’s party, the Bolsheviks, eventually took over many of the levers of power in Russia in 1917 and radically changed Russian society and thinking.

Now Lenin popularized a concept called vanguardism. He was a big proponent of creating a revolutionary vanguard, so he would gather together the individuals who were the most politically advanced.

What Separated the Vanguard

His frontline agitators were called the revolutionary vanguard. Whereas the workers were disorganized, the vanguard was organized and politically and militantly potent.

Where the workers were often depressed, feeling hopeless and demotivated, the vanguard would bring hope, and motivation, and insight.

Where the workers had scattered ideas, typically a mix of forward-thinking liberalism, mixed with nationalism, mixed with worshipping the czar, mixed with old-fashioned peasant traditions, mixed with religious conservatism, the vanguard had a singular focus, had a singular message whose purpose it was to safeguard and promote their revolutionary ideology, whose purpose it was to teach the common man to not only fight for immediate local benefits like higher wages and better working conditions but also to reach for something bigger, to reach to transform society in a more fundamental way, to think deeper below the surface, that humanity in its sad state can become something more than it was, its potential could be unlocked.

You can think of this vanguard as the most advanced slice of the working class, the slice that pushes forward all the others, the slice talking with the worker and making arguments, the slice fighting for that worker in a strike or organizing a union, the slice with their eyes on the prize, its eyes on the horizon, which would be the greater transformation of society into something greater and better than it was.

What a revolutionary would do is he would talk with an individual in the factory.

He would talk to a farmer or a peasant.

He would talk with the sailor.

He would talk with the soldier and patiently explain to the man how he was being deceived by the dominant paradigm of the day.

Bringing Your Buddies Along

Is your buddy drinking alcohol and getting drunk all the time? Patiently explain.

Is your buddy smoking weed and doing nothing with himself? Patiently explain.

Is your buddy playing escapism video games all the time? Patiently explain.

Does your buddy think that learning how to become a better, more attractive man is silly and stupid? Patiently explain.

Is your buddy trying to impress women with a fancy car that he can’t afford? Patiently explain.

Is your buddy really needy and just stalking and creeping the girl out? Patiently explain. You get the idea.

You’re doing your part to persuade people who are skeptical that life can be better, to get out of a coping state and get them into a thriving state of positive momentum and taking forward action.

You’re doing your part to unplug these people from the mainstream and plug them into something that is better and greater, and inspire them, my friend.

Bracing For The Future

The other reason to take on this mindset of being in a revolutionary vanguard is that we are rapidly racing towards a future where manual labor is completely replaced by machines and artificial intelligence where most people will probably end up unemployed and on some kind of welfare or universal basic income,…

Living on government redistribution and plugged into video games or virtual reality fantasy, connecting with most of their friends through their phone, possibly living a comfortable life where they get cheap entertainment, cheap fast food, and a small little space to live in but their lives lack any sort of greater meaning or contribution…

A world where most of the wealth, money, and power lies in the hands of a couple of thousand mega-wealthy oligarchs who get fabulously wealthy selling junk food and passive entertainment to all the sheep–the sheep who are mentally impaired, mentally addicted, and physically unhealthy.

The sheep who are socially uncalibrated and socially awkward and made socially stupid, a future where the poor and powerless are fighting each other for the remaining scraps that fall off the economic table, fighting amongst themselves, fighting with each other, blaming and scapegoating this group or that group for their problems.

By becoming an advocate for unplugging out of the mainstream and taking control of one’s life and doing your part to help your friends follow along the better path, you are helping to lead humanity by taking on the role of vanguard, by being part of the spearhead where the future can unfold in a better way.

Surround Yourself With the Best

To become successful in their health, helping those around you by patiently explaining is only going to help you down the line whereas a year down the road or 5 years down the road, you are surrounded by friends that are more successful and you have a network of successful pals and buddies where one day they will return the favor, one day the good karma will come back to you.

I’ve put together Girlfriend Express so that you could expand your circle of friends.

In Girlfriend Express, you now have a close-knit group of like-minded fellows, as well as myself by your side to help you take your skills with women five levels higher than where they are now, so you can walk into a room and be instantly attractive to that one special girl that you have your eye on…

So that you can go talk to that girl and instantly capture her attention and spark that fire of attraction in her belly, so you can go on that date and have her falling in love with you by just making a couple of little tweaks to what you’re doing right now…

To having that beautiful girl wake up by your side and knowing she’s all yours.