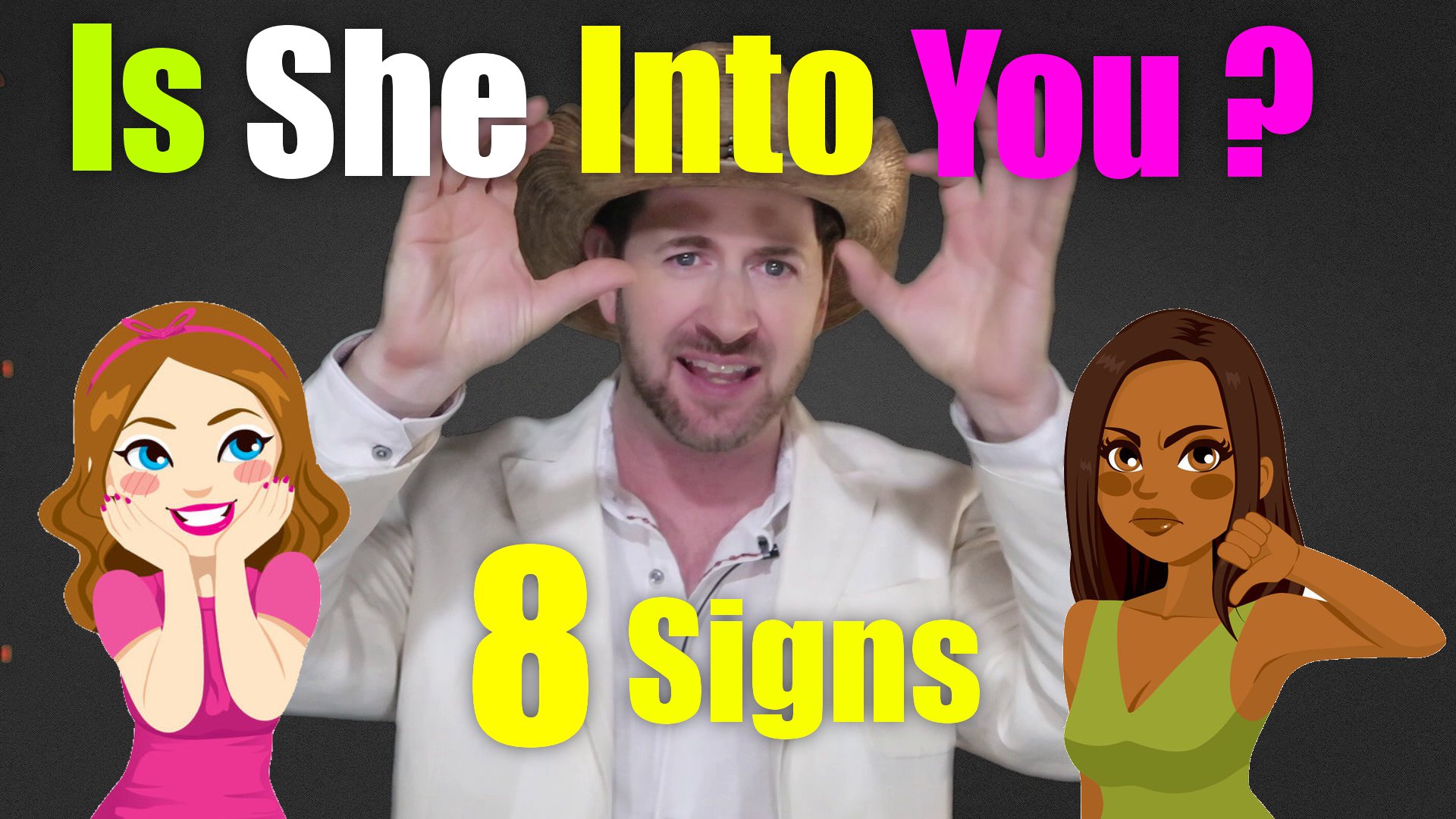 Is She Into Me: 8 Surprising Signs To Tell If A Girl Likes You

Peter wrote into me. “Hey, Jesse! I have a female friend that I hang out with and I have a terrible crush on her, but I’m not sure if she feels the same way about me as I do of her. How do I know she likes me or not?”

Frederick wrote to me, “Hey, Jesse! I was eating lunch in the food court and I noticed a really cute girl looking over at my direction. We locked eyes for a second and she turned away. Does this mean that the girl likes me or not? How do I know?”

All right, great questions, gentlemen. Maybe you have a female friend that you’re hanging out with and you want to tell her how you feel but you don’t want to get rejected. You don’t want to make things weird, so how do you know she feels the same way about you. Or maybe you’re talking to a girl at a party and maybe you’re just not sure if she’s feeling you or not. how do you know what she’s really thinking?”

Well, today, gentlemen, I’m giving you the 8 signs to know if a girl is really into you or not? This isn’t no ___ mamsy-pansy list like did she hold eye contact with you, did she text you back? Did she give you a compliment? I mean no, duh, right? No, gentlemen. We’ll be digging a little deeper down the rabbit hole today into some advanced theory to know for sure if the girl really likes you or not.

Listen, making moves, taking proactive action is truly the most awesome, effective, accurate way if you have wondered to confirm that a girl is actually interested in you, whether it’s approaching her, saying hello, touching her shoulder, moving her across the room, reading her palm, the point is to make the moves.

What you have to understand is making the move is a self-fulfilling prophecy and what I mean by that is this: it’s by making the moves and taking action and leadership and being the bad boy that just doesn’t give a damn what she thinks, that is what is most attractive to women. It’s the very act of making the moves themselves that makes the girl likes you and converts her interest into hard, sexual attraction. That’s also the best, most surefire way to find out if she likes you or not.

Consider this, my friend, consider that if you wait and you don’t make any moves at all and instead you wait for the girl to give all the positive signals that you crave that 90 percent of the time, you will lose the girl. Even if she likes you, it’s not going to matter because you waited and you let the opportunity slip through your fingers.

But when you make the moves, either one of three things will happen. (1) Either you make all the moves and you find out that she does like you because she’s responding well to those moves and those moves are a further sign of confidence and entitlement, which just ratchets up her sexual attraction for you and that means that you win. (2) By making the moves, you find out that she wasn’t interested in you and yet by making those moves, you still ratchet up her attraction, the hard, sexual interest and then you win. (3) You find out she wasn’t interested in you and she’s still not interested in you, and in that case, nothing lost, right?

Here’s the deal. instead of looking for signs as to whether she likes you or not as permission to move forward, don’t do that. Rather than looking for signs or signals, instead just make the moves, push forward, and paradoxically that gives you far better results.

Why? Because again it’s a self-fulfilling prophecy and confidence in not giving a bleep is the number 1 attractor to women. That’s what makes the sexy bad boy the sexy bad boy. He assumes he’s attractive and he assumes that the woman has attraction for him. He’s not looking for signals as to whether he’s worthy of her or not and he’s not looking for signs of permission. No, my friend, the sexy, sex-worthy guy makes an assumption of attraction and he takes action.

Rather than looking for positive signs, notice the absence of negative signs. If the girl is giving you negative signs like she’s crossing her arms, she has an indifferent tone of voice, she avoids eye contact, she turns her body partly away from you, she’s frowning. She’s expressionless. She seems ill at ease or she tells you to go away, you know if you’re in her presence and you are talking to her, keep on talking. Remain unreactive. Don’t let it affect you emotionally. Give it a minute. But if not, you can politely excuse yourself, nothing lost.

Does she stand in place while you talk to her? Let’s say you start talking to a girl at a bar or you approach and say hello to a girl out on the street or in shopping store. The very biggest sign that she likes you or not is if she’s standing there and listening to you talk because women if they’re really not into you will not hesitate to excuse themselves and hightail it out of there. But if the girl is standing there, it means you have her attention and even absent of other positive signs like she’s not contributing much back to the conversation, it means that she likes you enough to give you a chance. That’s the only signal or sign that you really need to at least keep going with it and further escalate.

Let’s say that you have a female friend and she hangs out with you alone and she stands there and listens to you while you talk for long periods of time, you can just assume that she likes you.

She responds to compliance requests. If you can get compliance from a girl especially multiple forms of compliance, you can bet your bottom dollar that she’s attracted to you. For example, if you take her by the hand and lead her across the room and she complies or for example, if you ask her to try to make you laugh and tell you a joke and she complies and tries to tell you a joke, or for example you tell her to roleplay as being boyfriend and girlfriend and she complies, or if you ask her to give you a ride in her car somewhere or prepare you a sandwich.

If a woman complies with little requests you make, in other words allows you to be the leader and she will be the follower, or put in another way, she’s reacting to you in a way where you are the actor and she is the reactor, that’s a huge sign that the girl is very much into you.

This is the mother of all compliance tests, moving a girl into isolation with you. Let’s say you’re at a bar or a club and a girl is with her friends and you take her by the hand and you lead her away to a quieter part of the bar away from her friends so that you can be alone with her and she complies, that’s a huge sign that the girl is really into you.

Say, you have a female friend and you tell her to come on over to your place to study and she complies, she comes on over and now she’s alone with you, that’s a huge sign that the girl really likes you. Or if you invite a girl out on a date and she actually shows up and she doesn’t bring a friend with her, that’s a huge sign she’s interested.

If a girl comes over to your apartment and you tell her to sit down on your bed alone in your bedroom with you and she does it, that’s a huge sign of interest. Anytime that you have a situation of a girl moving into isolation with you, that’s a blaring green light.

She lets you get physical with her. Yes, though verbal conversation, you can make a girl feel interested, curious, fascinated, lightly attracted, and comfortable with you. But it’s physical touch that turns that light attraction and comfort into hard attraction and obsessed crushing where the girl is thinking about you every minute of every day. If a girl lets you get physical with her, that’s a big sign of interest on her part.

Look for passive signs of interest from her, things like playing with her hair. She has these large dilated pupils. She is facing you squarely as she talks to you or she has a big smile on her face.

Now I put passive signs last on this last because these kinds of signals are dangerous. Dangerous in the sense that men begin reacting to these signs and signals rather than taking action. Their thinking goes, “Yeah, she smiled and made eye contact with me, but I want to be really, really sure that she likes me, so I’ll just wait and do nothing until I have even more evidence.” Or he’s thinking, “Yeah, sure she was into the conversation but now she seems a little bit more distant, so I’m not so sure if she likes me as much as she did before.”

The problem with reacting to positive signs of interest are that your emotions are going up and down like a rollercoaster going up when you get a positive signal, going down when she pulls away a little bit. Then the woman has your feelings and emotions by the balls and you are reacting to her and she is controlling you, which is not attractive.

All right, gentlemen, I have a story to share with you.

I had a friend who is crushing on this girl at work. He was crushing on her real bad and he was confused because the sexually savvy woman would normally ignore him, but every once in a while, she’ll give him a little glance, a little smile, a nice little short conversation. He was always wondering, “Does this girl like me or not?” He wanted to know what she was really thinking of him.

Well, gentlemen, I created the Girlfriend Express Method particularly for situations like this and the link to watch it is in the description below. It’s designed for you where you meet the girl of your dreams, win her over easy and fast, and live happily ever after with the girl that you deserve.

Fortunately for my friend, I was able to give him 2 questions that revealed exactly how she felt for him while simultaneously allowing him to move forward and get the kiss. Here is the link right here to watch the video. Click this button right now. It’s a fascinating way to shortcut the process to getting the girl you want.