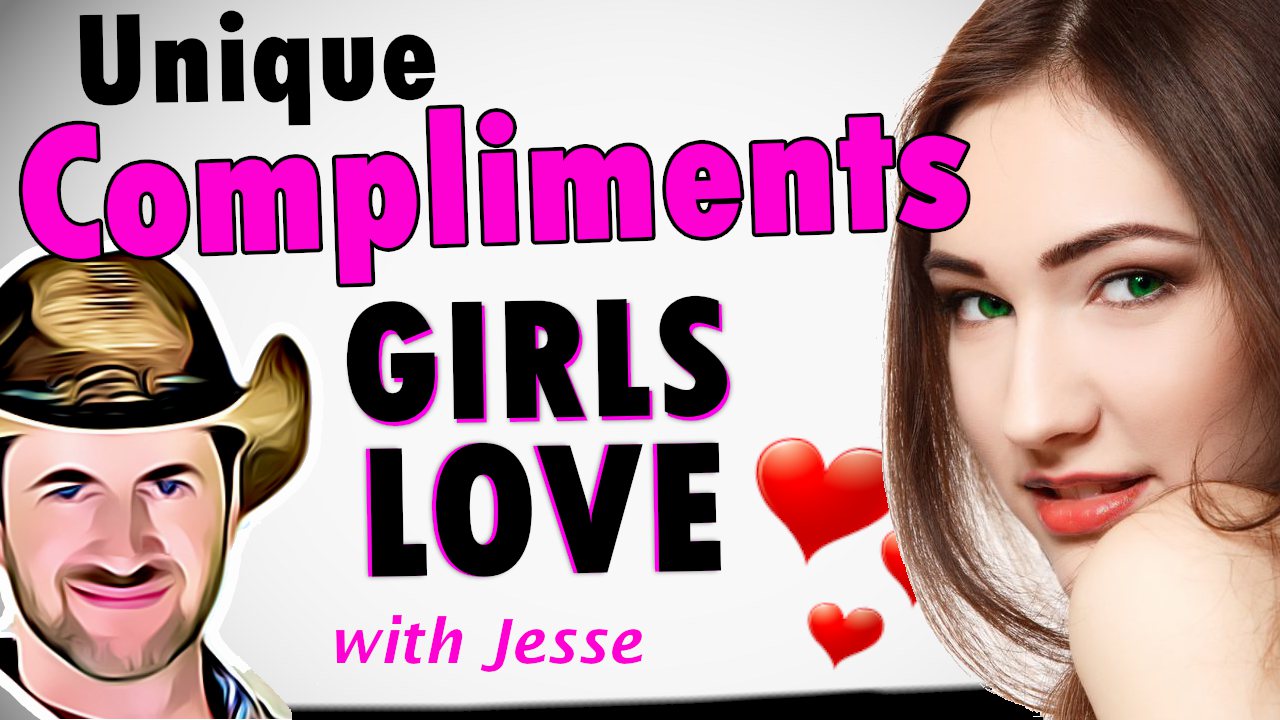 We’re taking your compliment game-giving skills to the next level to get that pretty girl gushing and crushing because a well-placed compliment will get her thinking, “Boy! I really like that guy! I wonder if he likes me back?” And have her writing about you in her personal dream diary, blabbering about you in her love journal that very night, my friend.

In fact, I’m going to give you 4, count them 4, different compliment types that work way better than just gushing to a girl how pretty she is.

The Wrong Way to Compliment Girls

Now I’m a little bit embarrassed to be even sharing with you the story because you can learn from my own terrible mistakes.

Back in the day, I’d run up to girls cold and start off the conversation with a pretty aggressive compliment about her looks. I’d run up to a random girl that caught my eye, and I’d tell her, “Excuse me, miss, but I just had to come up and tell you that you look absolutely stunning.”

I went to dozens and dozens of girls with this exact same opening compliment.

The results were kind of, “Ehh!’ I mean I got a good initial reaction from the girl. She’d smile for sure. I mean what girl doesn’t like getting a compliment, but the girl would just tell me, “That’s so nice of you. My, my, my, you’re such a good boy. Well, thank you. Goodbye.”

Now part of the problem is I would just stand there and wait for her reaction, thinking that the compliment would do all of the work by itself.

It’s like the girl coming up to you and straight up tells you how much she wants to bang. You’re hot. That’s the compliment we, as men, want to hear. But girls are different. Girls don’t have the same motivations as us, men.

Why Generic Compliments Aren’t As Powerful

The biggest problem with telling a girl how mesmerized you are by how she looks is that,

(1) it puts the girl up on a pedestal where she’s up here and you are down here. At least, that’s the implication.

(2) It takes some of the tension out of the interaction. You want the girl to be thinking, “Oh, my gosh! I wonder how much she likes me. What does he really think of me?” But if you tell her straight up how much you want to bang her, it just deflates some of the mystery. She knows she has you.

Telling her that she’s amazing is pretty damn uncreative. It’s just not that imaginative, and basically, it’s straight up lazy.

Any guy, even the biggest loser, who is lazy and unimaginative and a beta male, any guy who thinks he’s a worthless piece of turd, can tell the girl, “Wow! You’re just so pretty.” You’re not giving her any evidence as to whether you’re actually this cool bad-assed hug muffin guy that she should get to know or whether you’re just the next loser who’s waiting in line to suck up to her and kiss her ass.

Here’s what you want to do, my friend. You want to give her a form of compliment that’s a genuine signal to her that you are indeed an awesome dude of amazingness. When you do that, that’s when you really hook her heart and reel her into your arms.

Type #1: Compliment Her on Something Specific

Or if you can’t think of anything specific to say, just tell her, “I really like your sense of style. It’s so unique and elegant.”

For extra brownie points, if you want to make the girl laugh, you can even make a funny impression of your own compliment in a playful way. “Oh, my gosh, girl! Your outfit matches from head to toe. It’s beautiful. It’s amazing. Where can I find a purse like that one?” Then, you know just laugh at your own joke if you think it’s funny.

The second compliment type that you can use, my friend, is the open-loop compliment.

Now an open loop is where you begin a thought or begin a story and you just don’t finish it.

For example, back in 2015, I saw Star Wars: The Force Awakens in theaters and the movie was full of open loops. Who were Rey’s parents? What was Luke Skywalker doing on that island? Is Luke going to train Rey? Will Rey be turned to the dark side? Who the hell is this guy, Snoke, and where did he come from?

These are all unanswered open loops to keep you coming back to the theaters for the next movie.

Then at last, The Last Jedi comes out, and it doesn’t even close a lot of the open loops from The Force Awakens, damn it! It just goes on to create new open loops and it’s maddening because I got to wait 2 more years to get some closure here. As you can see, this is what keeps me up at night.

But you see, it does work. I will be going back to the theater. They have me by the balls.

Buy you, you can use the same principle in your compliments.

You can have the girl to stand there and listen to you talk while you have an open loop festering in her mind, while you have this question implanted in her brain that remains unanswered.

For example, you can tell her, “You know what, there’s something really interesting about you that I like, but I can’t just quite place my finger on it.”

Or you can tell her, “You know what, you just have this incredible energy about you that I really like, but just hang on a sec. I’ll tell you exactly what it is when I figure it out.”

Then you quickly change the subject to something else to keep on talking.

The third type of compliment that you can give a girl is cold reading a character trait of hers.

Or you can tell the girl, “You know what, as I get to know you, I can say without a shadow of a doubt that you’re a very caring and warm person, aren’t you?”

What’s cool about complimenting a girl based on a personality trait or a character trait is that for a very beautiful girl, she’s not used to getting a compliment based on her character. In fact, it never happens. Ninety-nine percent of guys will tell her something based on her looks.

You will really stand out in a big way because it’s different. It will be something that she’s never heard before.

It will take her by surprise and have that much more punch and impact on her. Because you’re connecting with her on something more than just skin-deep, she’ll feel like she has a special connection with you, a special connection that she just doesn’t have with other guys even if you just met her.

Type #4: How She Affects You Compliment

The fourth type of compliment that really packs a punch is couch the compliment in how it affects you.

For example, you can tell the girl, “You know what, you’re so much fun, I really enjoy talking with you.” She’s affecting you. She’s giving you joy.

Or you can tell her, “Wow, girl! I love your smile. It really brightens up my day.” She’s affecting you. She’s putting a smile on your face.

You’re basically telling the girl how her presence is changing how you feel, how she’s affecting your mood.

Girls love this. They like this compliment because women are socially-savvy creatures, and they’re highly attuned to how they make other people feel.

Having 4 effective ways to compliment a girl is fantastic, but it doesn’t mean much if you don’t even have the entitlement to go up to that girl you really like and talk to her in the first place.

If she doesn’t know you exist, every technique in the world will still fail you, my friend, and it doesn’t mean much if you give a girl compliment and then you can’t think of what to say next and you just stand there, looking like a fool.

You need to build the inner game of becoming a confident man who feels entitled to his very core, to have that beautiful girl as your girlfriend, and that’s where Girlfriend Express comes in. Girlfriend Express, your magic pill of pickup power essentially.

Girlfriend Express is a system I developed over the past 15 years now, so you can say a few special things to the girl and make her stop in her tracks, make her utterly fascinated by you, make her feel an irresistible, magnetic force that just pulls her into you and make her feel like you are the one and the only one for her.

A blueprint that gives you everything you need to say, gives you every move to make in a step-by-step fashion and know exactly when is the right moment to kiss her and have her kiss you back, and know how to keep that girl in a relationship, so that she remains your loyal, sweet girlfriend for as long as you want without worrying about her running off with some better-looking meathead or spoiled rich brat.