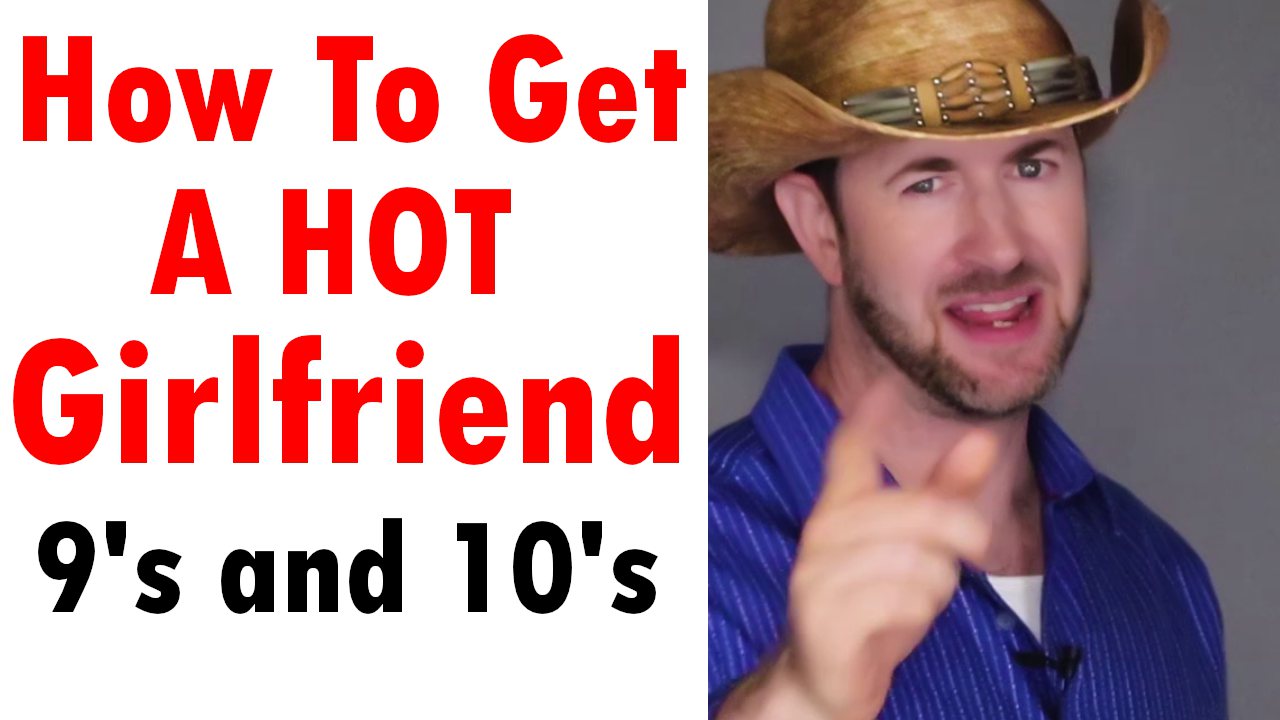 This video is for those guys that want a hot girlfriend.

And your friends are just wondering, “How the hell did Little Billy pull that off?” You bring her home to your parents and your parents almost can’t even believe it and your life almost completely changed.

At the end of this video, I’m also throwing your way a super-secret final tip. This tip kind of just pulls it all together in a way that kind of clinches in getting that superhot model girlfriend.

I’m also going to be sharing with you a devastating mistake that I see guys make over and over and over again, a mistake that you are most likely that if you make this mistake, it pretty much nixes your chance of pulling this off and getting that girlfriend that you want.

Also, quick word of warning: this is not some wishy-washy mainstream dating advice you read in GQ magazine or somewhere like that. This is not politically correct advice, so if you are easily offended, turn away now because what I’m about to say is a little bit controversial. It’s for men’s ears only. If you’re a woman, you don’t need to be here.

That being said, if you really want that 9 or 10 model-type girlfriend, you’ve got be watching this, so let’s crack right into it.

Now if those aren’t options, you can also choose your gym. There’s usually very beautiful women that go to the gym, that work out, that have hot bodies. You can choose a class, start taking some classes like a dance class, maybe a salsa class. There’s beautiful women that love to dance, for example. Or you can take a humanities class, or photography class. Or you can go to your nightlife options like if you live in a medium-sized town or a larger city, there’s usually some bars or some lounges, some nightlife that pretty girls usually will attend to.

You want to choose one or even better yet two locations that you will be focusing on to work to find these girls.

Step 2 for getting a beautiful girlfriend is now you are going to build your social circle.

Once you’ve chosen your place of attack or two locations even better, now you are just going to be introducing yourself to everybody. You’re going to be that sociable guy that makes friends with everybody. Now these aren’t like deep friendships or anything like that. It’s just like you’re the friendly, sociable cool guy that always says hello to them, always starts up the conversation with everybody you see.

For example, if you choose the gym as your location, go up to the person working the counter, ask them how their day was, ask them their name, chitchat about the weather even, anything. You’re just being the sociable guy. Then you go lift weights.

You see a guy lifting his weights. He is this big guy. He looks like he knows more than you. Ask for some tips on how he got big because men love to talk about that stuff. Men love to share information. You’re just going to go around the gym, say hello to everybody that’s near to you, just be the sociable guy that talks to everybody.

Now the other thing to remember is that you want to be talking to the girls as well. whether it’s at school, the gym, the nightlife, or your workplace. Even the girls that are not attractive, even the girls that you don’t want to hook up with. She’s not that pretty of a girl. She doesn’t offer you any value, so why would you talk to her? Well the reason you would talk to her is because you are building up your social circle. You want to know everybody by name.

If Suzie is there and she’s not particularly attractive. Maybe she’s an older woman who is married with 5 kids, whatever it is, you can still get to know her as a human being. You can still bring her into your social circle so that you recognize her by name and she gives you a smile when she sees you because the two of you are friends. What’s important here is building up a wide social circle where everybody knows you.

The next thing that you want to do is practice being that physical guy, that guy who is just physical with everybody from the very beginning, so let’s say you meet another male, shake his hand. Let’s say you meet another woman, shake her hand. Let’s say there’s a girl that you see the second, third, or fourth time, give her a little hug when you see her again. Thumb wrestle with her. Play some games. Read her palm.

Basically, you are just practicing getting physical in kind of innocent ways. This isn’t like pinching her butt, or anything. It’s very friendly, innocent, little physical things that you are practicing so that when that 9 or 10 comes along, when you meet that girl of your dreams, you’re already used to being physical. This is something you’ve done a hundred times, so you don’t freak out. you don’t freeze out.

You don’t hesitate when that beautiful girl comes along. You just naturally do the routine that you do with everybody, so that you can get physical with that perfect angel right away. Now in this process because you’re going to where the 9’s and 10’s are and you’re being the social butterfly, you’re meeting everybody, you will be meeting these hot girls either just by introducing yourself because you’re just talking to everybody.

You introduce yourself to everybody. You’re the guy who knows everybody, so meeting her just seems natural because it’s just another girl that you’re going up and talking just like you do with everybody, or you’re going to be introduced to these girls.

Again like the example for school. Maybe you make friends with guys on the football team, and the football players have access to some of the hottest girls in the school. You’re naturally going to get introduced to these girls. You’re not even cold approaching them. you are warm approaching them. You don’t have to go up to her just like, “Hey, Suzie, I saw you over there. you look really pretty. I want to introduce myself.”

No! You’ve got these cool dude football players that she knows introducing you to her, so now you are in the cool club. You are one of the cool people. It’s a much hotter approach. It works much better that way. Not only that, but that beautiful girl that you’ve just been introduced to also sees that you talk to everybody, that you’re this friendly and cool guy that all the less pretty girls know you and maybe want to date you, or talk about you, or say good things about you. That’s very powerful in creating attraction.

Or say that you’re at the gym and you’re not introduced to the pretty girl; at least she sees that you’re talking to everybody. Maybe she’s up there on the treadmill and she sees, “Wow! This guy talks to everybody. He knows everybody!”

When you go up and you talk to her, it feels perfectly natural to her because she probably secretly wants you to say hello to her. She probably secretly has been checking you out and noticing you that you talk to everybody, that you know, John, Jim, Mr. Smith, the guy at the front desk. You know Suzie, Margaret, and Jennifer at the gym, and she wants to be kind of in that little club, that in club and it makes it way easier talking to her and opening her, and cold approaching her.

What you have to understand is that men and women’s brains are very different in terms of what we’re attracted to. We see a girl and we know within 10 or 20 seconds whether we want to have sex with her or not. It all comes down to the visual elements. But women are a little bit different. Women see a very handsome man. She might feel attracted, but she needs to spend a couple of hours, maybe more than that, really getting to know him because she doesn’t know whether he would just have sex with her and then instantly dump her and run away. Maybe he’s really an ax murderer, or he’s an asshole, or drunkard, what kind of psychological problems he has, whether he would be a good father, so to speak.

But if she sees you surrounded by other people, being friendly with other people, other girls like you, that’s evidence to her that she can make a split-second decision about whether you’re a good guy or not. It’s social proof. Social proof is almost the equivalent of you growing enormous breasts with beautiful cleavage. She can get attracted to you in seconds, so you must build that social proof.

Say your venue of choice is a series of bars. You want to build social proof by getting to know all the men. Just introduce yourself to them, exchange names, exchange a little bit of chitchat, talk to some of the girls. These girls might not be that pretty. These might not be girls that you want to hook up, but just say hello. Get her name. Exchange a sentence or two. Put a smile on her face. Make her feel good. Make the rounds. Get to know everybody, so that when you go talk to that really pretty stunning girl, two things happen.

Do you see what we have done here, my friend? Now you have access to all the 9’s and 10’s, but you’ve also created attraction with them.

The next step is you want to build that man-to-woman connection with the girl, so it’s not just friend-to-friend, but man-to-woman.

Let’s just connect the dots, shall we? How does this work? You know everybody. You know everybody in that venue. She sees that you have massive social proof. She sees that you have preselection with all the other girls, even if they’re not as pretty as her. You go up to her. You come across as a cool friendly guy, very easygoing because you’ve already approached a ton of other people, so it’s a normal thing for you.

You get physical with her right away, creating this man-to-woman sexual connection that feels very natural because you’ve already done it dozens and dozens of times. It’s not some weird thing because you’re just so used to doing it. that creates attraction with that really pretty girl. That, my friend, is how you get that 9 or 10 girlfriend.