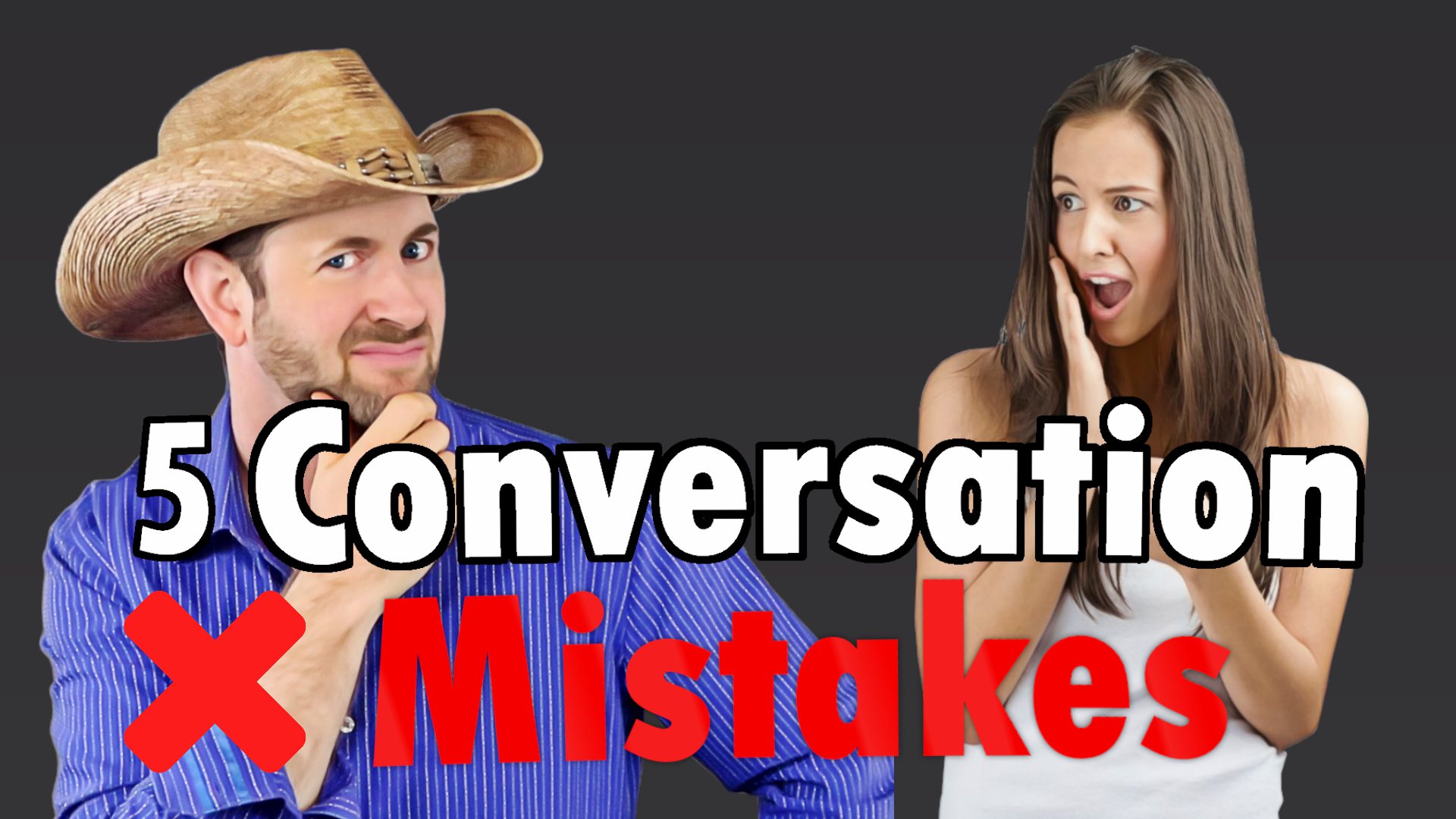 Jack wrote in to me here, “Hey Jesse, I seem to have a problem talking to girls. Whenever I’m on a date, girls seem to lose interest. I think I’m an interesting guy, but for some reason the conversation just never clicks.”

Has this ever happened to you, gentlemen?

You’re chatting up a cute girl.

Maybe you’re at a social party and its a casual conversation, Maybe you’re on a date with her one-on-one. Either way, it seems to be going well.

She seems into the conversation more or less.

But, after a couple of minutes the girl’s like, “Well, it was nice meeting you. You seem like a nice guy. Goodbye.”

Or you ask for the girl’s contact details, and she gives you her email address instead or even declines. Ouch!

And you’re like, “What the hell? I mean, what happened?”

“I thought we were connecting.”

“I thought it was going well enough.” “

“I saw a beautiful future for us together maybe.”

“I don’t know. I just can’t seem to make the conversation click and generate attraction.”

Well, my friend, today is a good day because I am revealing to you four conversation mistakes that are screwing up your chances with every girl you ever talk to.

These four mistakes leave the girl saying “Sayonara” to your Samba and leaves you empty-handed wondering, “Where’d she go?”

And by the way, if you enjoy this kind of topic, please be sure to hit that like button down below and subscribe to the channel.

Mistake #1. Talking too much too fast

So, onto the good stuff!

Conversation mistake number one is talking too much, too fast.

You’re talking to a girl, chatting her up.

Now this was never my personal problem.

Because I was so nervous, I would just never be talking to a girl in the first place.

But when I’m coaching a guy, and I push him into talking to a girl, he’s almost always talking WAY too fast.

It has a lot of pauses.

You’re not trying to get to anywhere quickly.

You’re not trying to convey information.

You’re trying to create a mood and an emotion that only slow, sexy talk can accomplish.

And that just reveals to the girl your insecurity.

It reveals to the girl your lack of confidence.

It reveals to the girl that you don’t really feel worthy being there with her and you lucked out.

It’s a signal to the girl’s brain to think, “You know what, this guy is not the guy for me.”

Now, yes, at first, you might need to do a lot of the talking to get the girl feeling comfortable around you.

At first you have to assume the burden of the conversation.

But once the girl starts opening up to you, and she begins to talk, let her talk.

When the girl is talking, that’s a form of investment on her part.

She’s investing into the interaction with you.

She’s putting her time and emotional energy and revealing herself to you.

And the more she invests, the more of a stake she has in seeing something happen.

But if you are insecure, some guys almost can’t believe that the girl wants to invest in them, so they just keep talking.

They cut the girl off and keep blabbing away.

Or some guys think it’s “alpha” just to dominate the conversation.

If the girl starts talking, let her invest you.

It’s a form of chasing.

Let her chase you.

Let her be that hungry cat that wants to put her claws into you, the juicy meat.

Conversation Mistake #3. Not being loud enough

Conversation mistake number three, my friend, and that is you’re not being loud enough.

Your voice should be one or two levels louder than the surrounding environment, so that the girl can clearly hear you.

But also to show her that you’re not afraid to bring attention to yourself.

Think of a really hot girl.

And she’s got cleavage showing.

And she’s got her makeup done.

And she’s got her hair done.

And she walks into a coffee shop, or she walks down the street.

She is bringing a lot of attention to herself.

She is bringing negative attention to herself because there’s other women looking at her that hate her, but she doesn’t care.

She’s okay with it. She’s confident.

Your form of dressing yourself up in a hot little dress and doing your hair and makeup, the male equivalent of that, is to speak with a loud voice that is one or two levels higher than the surrounding environment.

So if you tell a girl that she looks “cute,” you’re not trying to hide it from other people.

And that’s incredibly sexy to a girl because it shows rock solid confidence on your part.

And almost no other guys can pull that off.

And conversation mistake number four, my friend: being overly friendly and overly agreeable with the girl.

It’s like you want her so badly that you feel you have to say “yes” to everything she says and be super friendly.

And guys fall for that trap because it gets the girl smiling and pleasant,

You get a good reaction, guaranteed

But it’s a good reaction that puts you into the friend zone because she already has you and there’s no chase involved.

And then you ask yourself, “Well, why did she put me into the friend zone?”

Well that’s your answer right there!

You’re too much a of a friendly nice guy with zero edge to you.

But, you can’t be afraid to disagree with the girl or challenge her, or qualify her, or screen her, or throw a test at her.

That other 10% of the time where you challenge her that makes you unpredictable, interesting, and a challenge—somebody that she has to chase a little bit and win over his approval of her.

And conversation mistake number five, my friend, do you get nervous, or even terrified just talking to a girl?

Do you find yourself paralyzed when it’s time to go in for the kiss or do something more?

I mean, that was the first 25 years of my life. I would just avoid girls completely because I didn’t know what to say or how to act.

The Solution to your conversation problems

But here’s a newsflash for you, my friend!

The secret piece of the puzzle that makes a few men get more women than they can handle is actually something you can easily grab for yourself.

And the only difference between you and someone else who is naturally gifted with women is that you haven’t fully grasped “it” yet.

No one has ever told you what “it” is and what it’s all about.

I’ve put together a presentation at you watch here at HTTP://Girlfriend.Express that shows you how to finally become the man you were always meant to be.

Shows you how to have conversations, and keep that amazing girl enraptured, laughing, and smiling and wanting more, and more, and more.

Until she’s in your arms, and she’s yours and yours alone forever.

This presentation will lead you on the path to becoming a better conversationalist than 99.9% of men on this planet so you can just clean up the competition, and never lose another girl again.

But instead, win her over from that very first conversation you two have together.