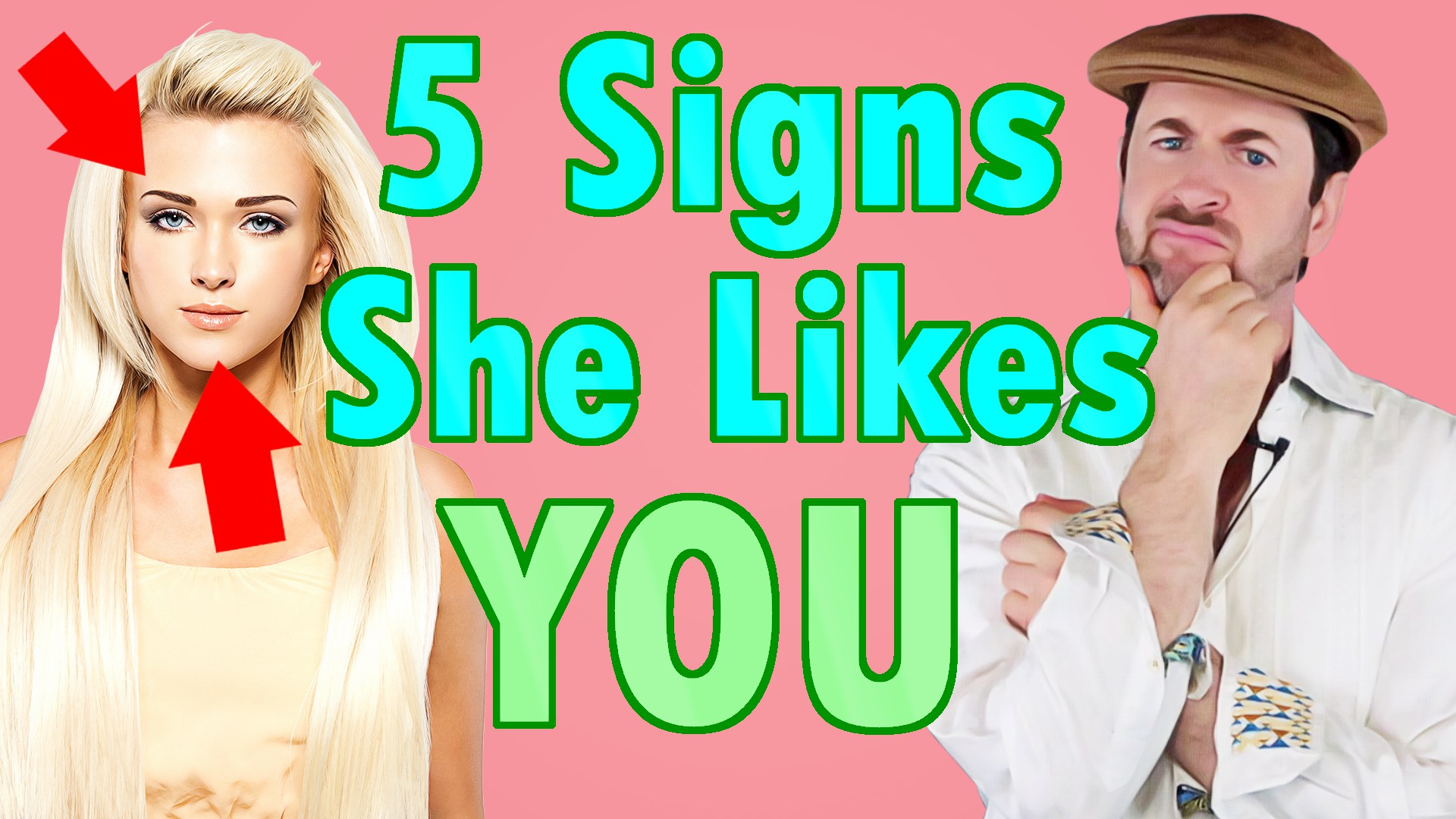 There’s nothing worse than talking to a girl and having no idea if she likes you are not.

You want to get her phone number, or ask her out for coffee, but does she like you?

You don’t want to have an embarrassing situation where you’re thinking, “I think she likes me. I’m going to get her number.”

And she tells you back, “No, no, no, no. Maybe another time honey.”

And she did like you, but you never made a move because you weren’t sure.

And she’s like, “You know, I really liked that guy. He never made a move.”

The opportunity slipped through your fingers and you never see her again.

So, in this video gentlemen, I am giving you the five surefire signs that a girl really likes you.

So, surefire sign number one that the girl really likes you is her body language.

Her body language tells all.

Is she playing with her hair?

If she’s smiling a lot?

If you can pick up on two, just two, body language tells, that means she likes you.

And listen. It doesn’t take much.

If you can see that she is doing two body language tells, that means she likes you, and that’s all the evidence you need. Case closed!

Surefire sign number two that the girl really likes you is that she’s asking you questions about yourself.

She might ask you, “So mister what you do?”

And, “Where are you from originally?”

Now you got to understand that girls tend to be nervous around a guy they like nor are women conversational masters.

So, you’ll typically get the same generic questions again, again, and again.

But even if she’s asking you uncreative questions, especially if she keeps restarting the conversation and re-engaging, it’s a sure sign that the girl likes you.

And the third way to tell if the girl really likes you or not is, is she touching you or not.

Does she touch your arm when she laughs, for example?

Girls will generally not physically touch a man unless she likes him.

The fourth way to tell if a girl likes you are not is she staying there in place.

If a girl is hovering around you, or she’s remaining interested in the conversation, that’s a pretty strong tell that she likes you.

So, if you find yourself talking with the girl for more than ten minutes, that’s a pretty strong sign that she likes you.

And the fifth way to tell if a girl likes you, and actually this one is kind of a ninja Jedi trick, and it’s don’t look for signs that she likes you. But instead assume that the girl likes you instead of thinking that girls don’t like you and looking for evidence and even more evidence that a girl might actually like you,

That’s not a good mind-frame to be coming from.

It’s much better to just assume from the very beginning that girls like you.

To have self-delusional confidence that every girl you talk to because you’re such a cool, bad ass, awesome dude. Of course, girls are going to like you.

So, you’re talking to a chick, and all that’s going through your mind is, “Oh yeah! This chick is digging me. It’s on!”

“She’s just talking to me because she’s in love with me.”

“She’s talking to me because I’m the most incredible man she’s ever met, and she’s crushing that hard.”

Now whether that is all true are not, it sort of doesn’t matter.

Because that will cause you to exude a very supremely sexy confidence that attracts the girl.

It becomes a self-fulfilling prophecy.

When you assume that the girls are going to like you, you act sexier and more confident, and that causes the girls to like you.

Whereas if you assume that girls are neutral toward you, and you need to look for evidence and signs, that’s going to cause you to have micro behaviors that are needy and unattractive, causing women not to like you as much.

How to get a cute girlfriend

So, there you have it my friend: the five ways to tell if a girl likes you are not.

And with that handy information, you can get her phone number, or go on an instant date without any fear of her saying “no.”

Now if you want to know what to say to a girl, to make her like you, it all comes down to a secret obsession that women have.

And this one secret obsession holds the key to winning a woman’s attention, her love, and her loyalty for life.

Because once you understand how this trick works, you’ll literally become the one guy she thinks about all day long even if she’s already turned you down or is in a relationship.

You can see how this trick works by going to www.seethefullstory.com.

And yes, this is controversial. This is not politically correct. But that’s why it works!

So, go check out that link.

Go check it out right now for the faster and easiest way to get an amazing girlfriend.

Women Just Want To Be Bent Over And Have Their Hair Pulled!

Attraction Is NOT A Choice – Here’s Why