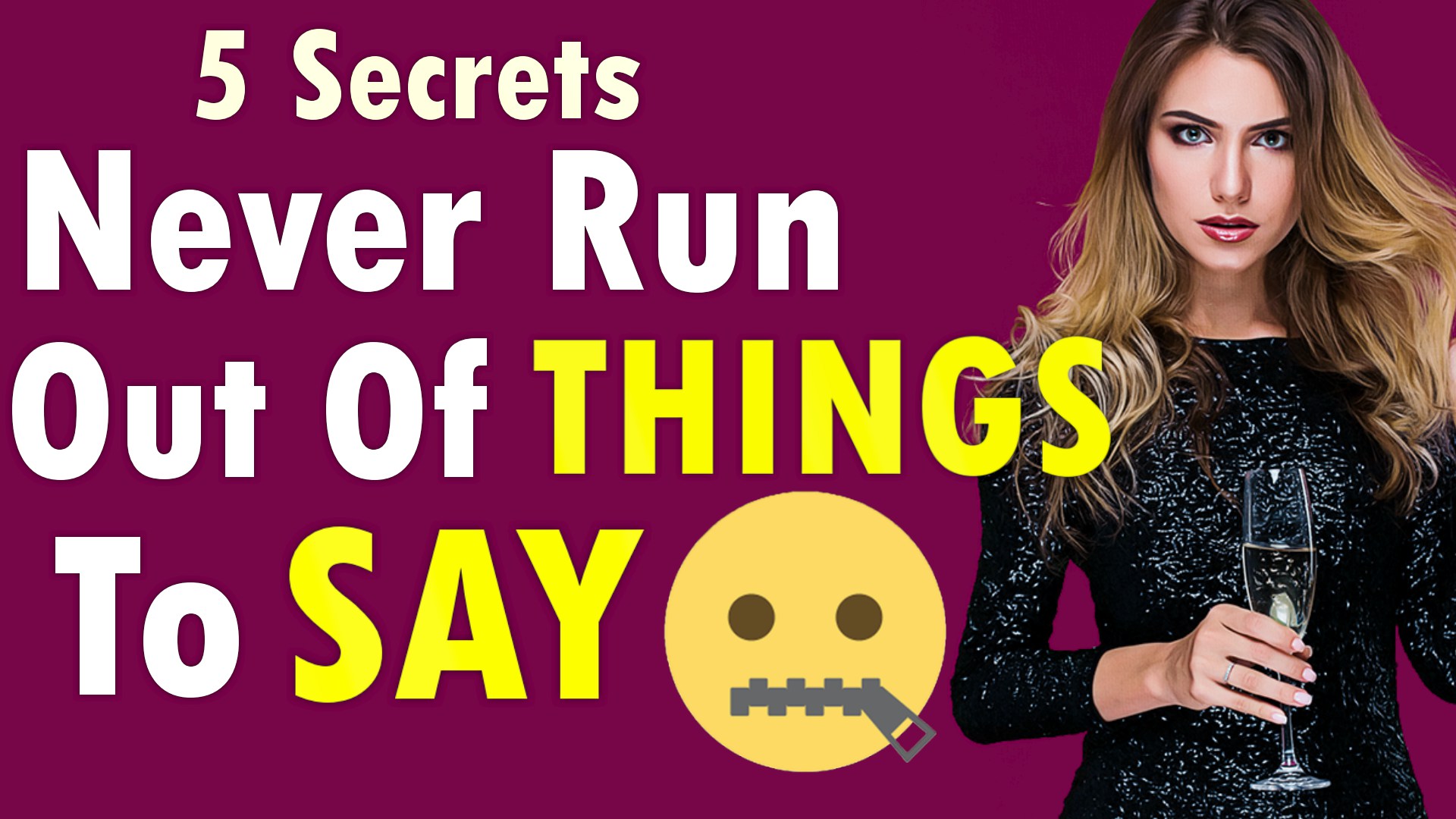 You know that one guy, that one guy you know who just seems to be completely natural with the ladies, who can talk on, and on, and never run out of things to say even with the prettiest girl in front of him.

But for you, those awkward silences inevitably come up and the conversation eventually fizzles out and goes nowhere.

“Why can’t I just have a normal conversation where it’s just flowing, and natural, and exciting, and interesting, where the girl is really into it, and it all feels effortless, and easy?”

Well, have no fear, my friend. You too can talk endlessly forever yourself and attracted girls around you like a moth to a flame because in this video, I’m giving you the five surefire secrets to never run out of things to say. Ever again.

Secret #1: Whatever you say has value

The first secret to never running out of things to say is to understand that whatever you say has value purely because it’s coming from you.

Whatever you say has value purely because it’s coming from you.

Think about it. That is the essence of confidence.

You don’t even care what words come out of your mouth because you know you know you’re awesome.

You’re assuming that you’re attractive and that everything that comes out of your mouth is attractive. It’s attractive purely because it’s coming from you.

And when you come from that mindset, you never run out of things to say because every word that can conceivably come out of your mouth is worthy to be said.

Is worthy to be said purely because it’s coming from you. Purely because you are naturally the most attractive man on the planet.

And having this attitude makes you come across as supremely confident. And it’s that supreme confidence that makes you attractive.

Not the words you’re saying.

Secret #2: Whatever you say is compelling

The second secret of never running out of things to say is to believe that whatever you say is compelling, simply because you find it compelling.

So, a big mistake is to try to please the girl and say what you think will impress her or make her happy instead of saying what you find interesting and compelling because then, you’re always walking on eggshells.

You’re always filtering what you can say.

And you end up so in your head and stifled that you can quickly run out of things to say.

When you get excited and passionate about something, that causes the other person you’re talking to, to also feel passionate and excited.

Secret #3: Be in the moment

The third secret for never running out of things to say is to be purely in the moment and don’t think ahead.

Don’t plan out what you should say.

Don’t arrange all the topics and conversation points you want to hit.

You know, back in the day I’d keep a cheat sheet in my pocket of all the conversation points and routines I’d want to hit.

And while that did work to a degree, I’d always run out of things to say to keep entertaining the girl.

And you never run out of things to say because you get good at improvising in the moment.

And the fourth secret to never running out of things to say is to lower your Standards!

Understand that whatever you say is good enough!

Guys seem to think they need to have this amazing conversation material to make the girl like them.

The problem with this notion though is that you’re wanting to impress the girl.

It’s a frame of putting on a song and dance routine, to make the girl like you.

It’s the frame of being somebody you’re not and putting on a mask to feel worthy of the girl.

Having such high standards also stresses you out and makes you overly serious.

And then the whole process of talking to girls isn’t even fun anymore, when in reality, girls love it when you are unfiltered.

Girls love it when you are not judging yourself.

And girls love it when you come across as real, and authentic because you’re just talking like a normal person.

Because you’ve lowered your standards of what is good enough to say.

It takes the pressure off of you.

It takes the pressure off of her.

And it makes talking to girls fun again and natural.

The fifth secret to never running out of things to say with women is to understand that it’s not what you say, but the energy behind what you say.

So, if you are playful, and you are lighthearted, and you are in illogical, and you say it all with a smile on your face, and a twinkle in your eye, you can get away with saying just about anything.

You can get away with saying even the most boring small talk on the planet, if…if your energy behind it is playful and relaxed.

When guys get all caught up in the content of what they’re saying, that’s when they sound serious.

And that sinks you like the Titanic hitting the iceberg.