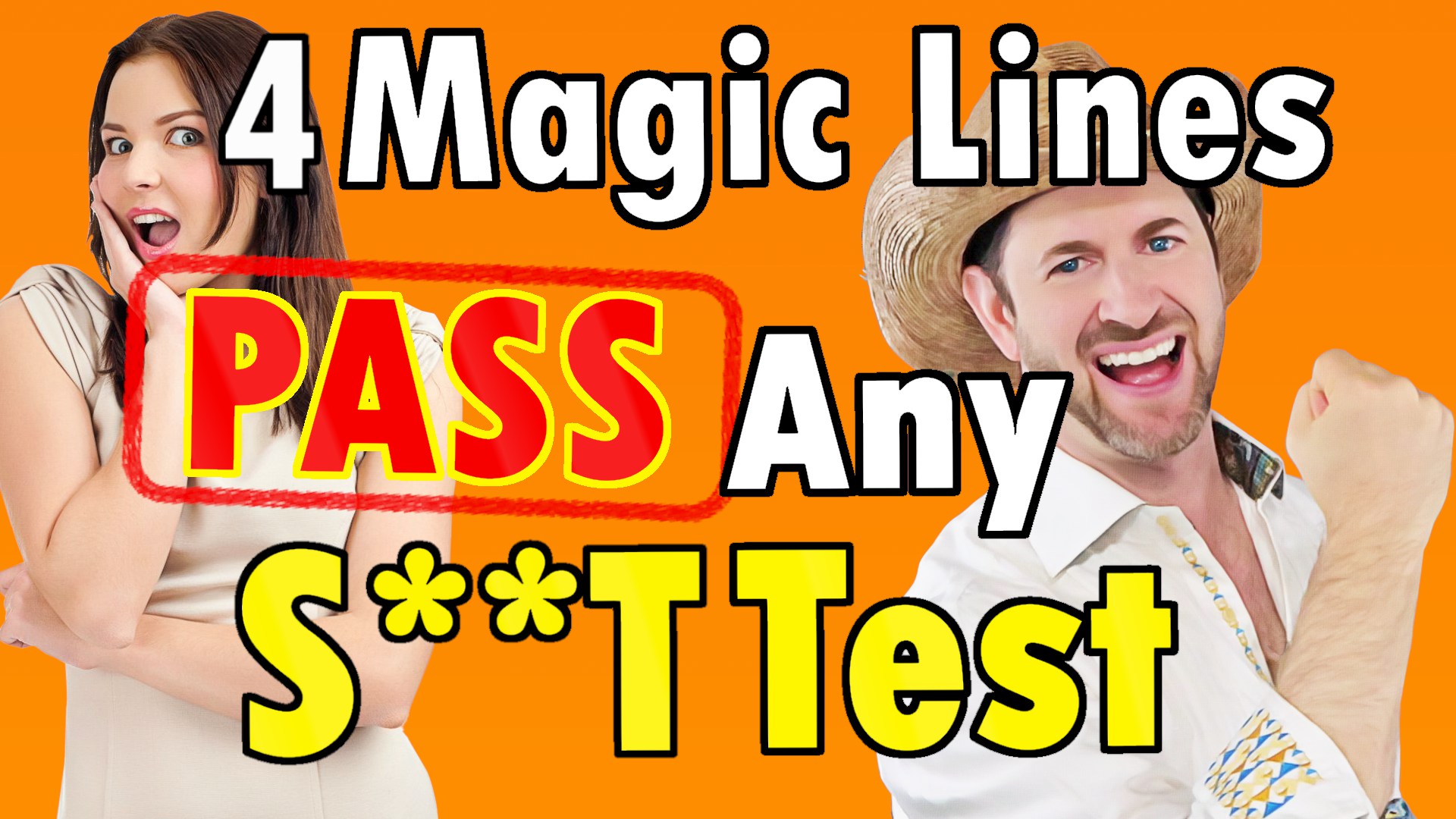 Today we’re talking four lines. That’s right! Four lines for passing any shit test or congruence test a girl throws your way, four lines that are both simple and easy to remember, where it doesn’t matter what situation you find yourself in.

You have a girl talking a bit of smack back to you or gives you a snide remark.

well, Jesse’s got your back, my friend.

What is a shit test?

So real quick, a shit test is a little remark that’s meant to test you.

It’s a quick way for women to screen you, to tell if you’re really a confident guy or whether you’re insecure.

For example, the girl might tell you, “You’re balding.” Or, “Sorry, I don’t sleep with guys under 6 feet tall.”

And if you slink away feeling dejected and rejected, well, that was an easy way to weed you out, wasn’t it?

Now, don’t get mad when women test you.

Women have to do it.

Girls need a quick and effective way to filter for men that are decisive, assertive, and confident, the things she wants in a guy like yourself.

And what else is a girl going to do?

She can’t just ask you, “Hey, buddy, are you confident?”

Because obviously every guy is simply going to tell her, “I’m confident.”

What the shit test does though is it exposes any emotional neediness or insecurities you have.

How NOT to handle a shit test

So, what you don’t want to do is be unreactive emotionally.

You should never get angry, upset, or defensive and snap back at her because she is going to think you’re insecure and a dick.

Nor do you want to answer the shit test logically.

If the girl asks you, “Why are you here alone? Don’t you have any friends?”

You don’t want to logically explain the situation of why you’re at a bar by yourself.

You don’t want to explain how you couldn’t get any of your friends to come with you because when you logically explain yourself to her, it just sounds like you’re needy for her approval, which is a turn-off.

And the third thing you don’t want to do, is qualify yourself.

You don’t want to start giving her a bunch of reasons why she should like you.

That just sounds like you’re logically trying to convince to make her like you, which comes across as super needy and uncool.

So, the first line for passing any shit test, is to simply say, “Uh-huh.”

“Uh-huh.” It sounds so simple.

But it communicates so much.

She says to you, “Oh, you look like a player! Are you a player?”

You simply tell her, “Uh-huh”

“Uh-huh.’’ What it does is convey your unreactiveness.

So, if you just don’t know what to say to the girl, don’t emotionally react and tell her, “Uh-huh”

And that one simple line is typically sufficient to passing any shit test she throws that you.

What happened to Ned

I want to mention first that if you have difficulty talking to women, where you don’t know what to say, or how to act, and you get outright nervous around pretty girls, you’re going to want to watch Ned’s story.

Where my friend Ned was crushing hard on a girl at work and she ultimately rejected them.

And you can watch how he turned it around, and eventually turned her into his girlfriend right here at this address www.yeswhathappened.com.

And there you can learn from Ned’s mistakes and Ned’s triumphs and see how you can get the girlfriend you’re after.

So, onto line number two for passing a girl’s shit tests is simply the word, “Yes,” where you agree with the girl, and you exaggerate.

She asks you, “Do you go up to girls all the time like this?”

So, you agree and you exaggerate.

It works because, first of all it’s unexpected.

And it shows that you are unreactive.

It shows that you’re not emotionally reacting.

You’re turning it into a joke and making it funny.

And girls love that!

The third line for passing a girl’s shit test is, “You like it.”

The girl tells you, “You know what, you’re balding.”

You just tell the girl, playfully, “So, what is it about balding guys you like so much?”

Or she tells you, “You’re too short for me.”

You simply tell her, “Why thank you!”

So, what you’re doing here is, number one, not emotionally reacting.

Instead, you’re taking what she’s giving you and throwing it back at her, amplifying it, and turning it into a funny joke.

And when you turn it into a funny joke, by misinterpreting it that she actually loves you, it makes the girl laugh.

And she can see that you’re not affected by it which means you’re a confident dude.

And you’re the guy for her.

And the fourth and final line for passing any shit test is to tell the girl, “Your mom.”

She says, “Sorry, I don’t sleep with guys under 6 feet tall.”

It’s like you’re not even allowing the shit test to penetrate into your consciousness by throwing back at her a nonsensical response.

She sees that you’re emotionally unaffected which means you’re that cool alpha bad boy she should get to know.

And you pass the shit test.

So, there you go my friend, four easy, simple-to-remember lines you can use to pass any shit test, from any girl.

And as you can see, it’s really not that hard.

Well, I had a great time recording this for you.

Don’t forget to check out that story of my friend Ned and how he landed his girlfriend.

Simply go over to ww.yeswhathappened.com to see how he turned things around with that girl he was crushing on so badly.