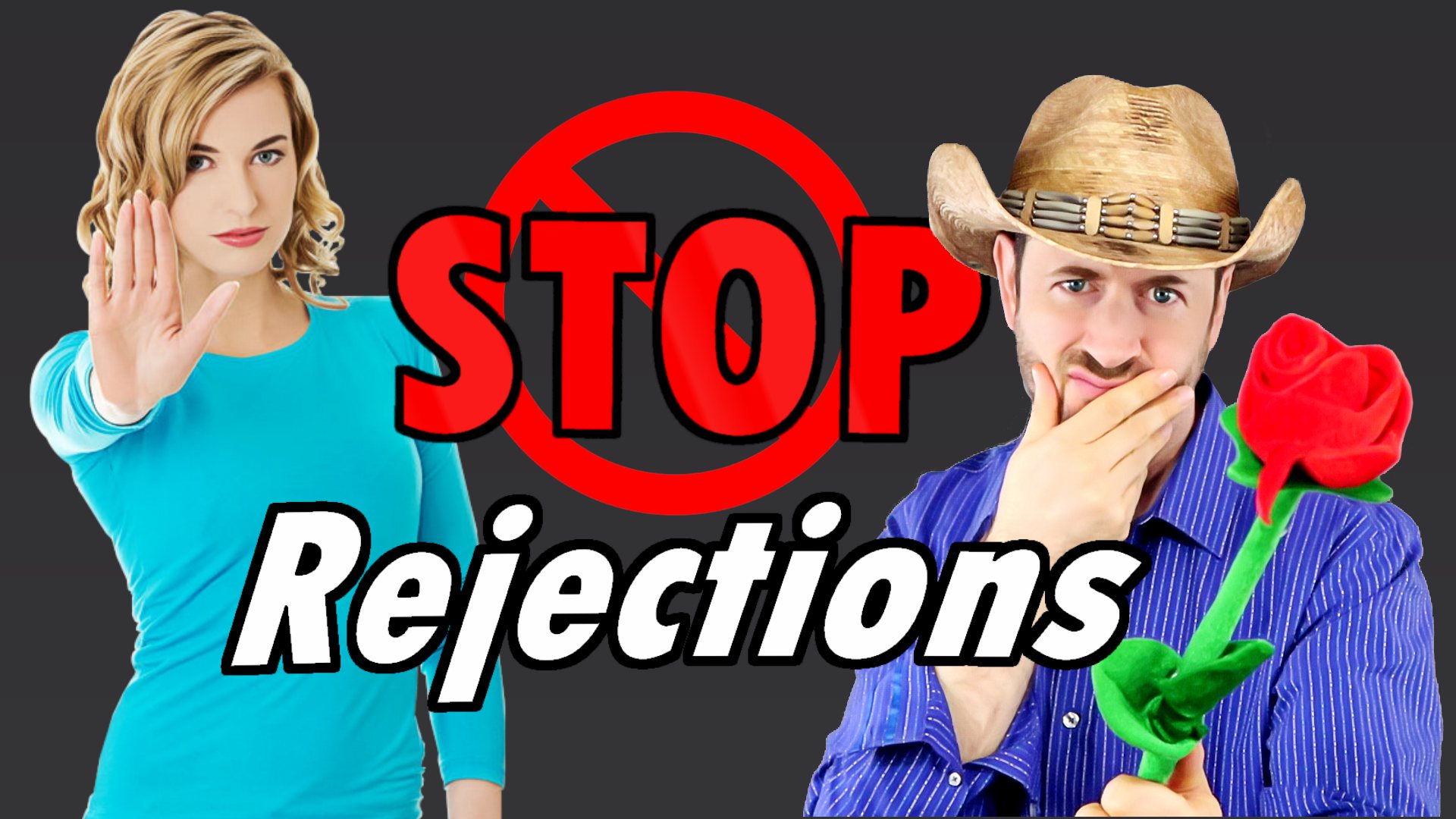 You are uniquely special in this world, and you have so much to offer a girl.

She would be so lucky to have you as her boyfriend.

But she doesn’t know that!

You go up, and you say hello to the girl, and she doesn’t know if you’re really that cool, awesome, stud muffin that you know you are, or if you’re an axe-murderer that is going to kidnap her and put her into your basement!

So, you need to give that girl that you have your eye on, the chance to find out.

So, in this video, you are in luck my friend. Because I’m going to show you how to overcome an initial rejection from a girl and hang in there in such a way that the girl wants to keep the conversation going and wants to find out more about you.

And by the way if this topic interests you, be sure to hit that like button down below, or subscribe. It helps to support the channel, and I really appreciate it.

A girl’s default state is to screen guys

Now here’s what you need to understand, my friend.

She needs to screen all the weird losers out from the few winners.

She needs to screen the guys pretending to be winners, but who are really losers underneath the surface, from the real winners as well.

Because most of the men coming up to her and wanting a relationship with her will have nothing of real value to offer her, and they simply want to leech off the girl.

I mean as men, we have it easy. We can just look at a girl with our eyes, up and down, and ascertain her sexual value in seconds by just her appearance.

It’s simple. You look at a girl and you know if you want to sleep with her or not within 3 seconds, right?

But for a girl, it’s not that easy.

A girl typically has to spend at least 10 to 20 minutes observing your behavior and making sure your behavior is consistent to determine if you’re really that cool guy you claim to be, or not.

And that’s why you have to have a certain level of persistence because a girl’s default state is to screen you out.

Her default state is to see if you will just go away.

She’s not going to be openly receptive often in the first couple of seconds.

Buy guys aren’t persistent about anything in life

New Year rolls around, and you make some resolutions, maybe to lose weight, or to quit smoking, or to write your book, or whatever it is.

They give up because it feels uncomfortable.

You get the notion to go to the gym, and after a couple weeks because it’s uncomfortable they don’t persist with it.

Their persistence muscle is very weak and undeveloped.

How giving up manifests itself

So likewise, when our guy starts talking to a girl, and she’s not interested in the first 10 seconds, he just gives up.

He tells himself, “Well, she obviously doesn’t like me that much. I need to save face and minimize the embarrassment of the rejection and get the hell out of this conversation as fast as possible and write it off as a failure.”

And the guy walks away with his tail between his legs like a rejected little puppy dog.

And don’t get me wrong. This was me for years, so I have 100% sympathy for what that feels like.

But what you don’t understand is that the girl’s default state is to throw you a small congruence test or to initially act disinterested, or to initially be a little bit aloof and quiet.

Because she’s screening out the guys who are weird, or lack confidence in themselves, or don’t feel deserving or worthy to be talking to her and acting a little bit of aloof at the beginning of the conversation, for a girl… is extremely effective!

It takes no energy on her part.

It’s very easy to execute, and it’s effective in eliminating 90% of the men who talk to her as being low value.

So, of course, girls do it!

How pickup teaches you persistence

And that’s why I love pickup so much.

And then suddenly, the good responses start coming.

You start seeing the girl turnaround and become interested after that initial aloofness that she gave you.

And you talk to enough girls, and that’s one of the fastest ways to exercise and strengthen that persistence muscle.

And you discover they weren’t rejections at all really. That was all just inside your head, how you perceived it when it was in reality just part of the game that women play to weed out low-value men that don’t understand the game but had nothing to do with you personally.

How pickup translates into wealth, success, and health

And that “skill” of persistence translates into all other areas of your life.

I’ll typically see a young guy that can’t stick with anything.

He can’t stick with going to the gym for more than a week or two.

He can’t persist in reading a book, and he just gives up.

He can start the project but can’t finish it.

But after he’s been meeting women for a couple of months, and over the span of a year or two, suddenly, it’s like he’s a completely new man.

He’s on his way to accomplishing his dreams and his goals.

Never mind the fact that he now has access to various pretty girls around him and is popular.

All because he developed that persistence muscle through his hobby of going out and meeting women.

Again, all because girls will relentlessly punish you for not being persistent and train your brain to stick with things.

Is this happening to you…

Now let me ask, you my friend, does the mere thought of approaching a woman make you feel nervous?

Does your lack of experience mean that you have no clue on how to get physical with a pretty girl, or how to keep from screwing up when you try?

Would you love to meet that great woman who you could share your life with, but you’re not certain that she’d even be interested in you?

The bottom line is, not knowing how to attract women feels really bad.

It leaves you feeling like you have no power in life and it sucks up all of your mental energy, leaving you feeling lonely, sad, and depressed.

When you know the secret…

On the other hand, knowing how to attract a girl feels spectacular.

Knowing what to do brings you confidence and a certain level of peace.

It just feels good knowing that what you’re doing works, has always worked, and will always work into the future exactly the way you want it to.

To get the exact results you want.

I created this presentation here at this link… http://Girlfriend.Express… link also down in the description below specifically, so that you know what moves to make.

So you can talk to her with confidence, knowing that she’s going to give you a great big smile and want to flirt and vibe with you even more, and having the confidence that everything is going to work out right in the end.

So, go to that link right now and watch that presentation, and you can thank me later.