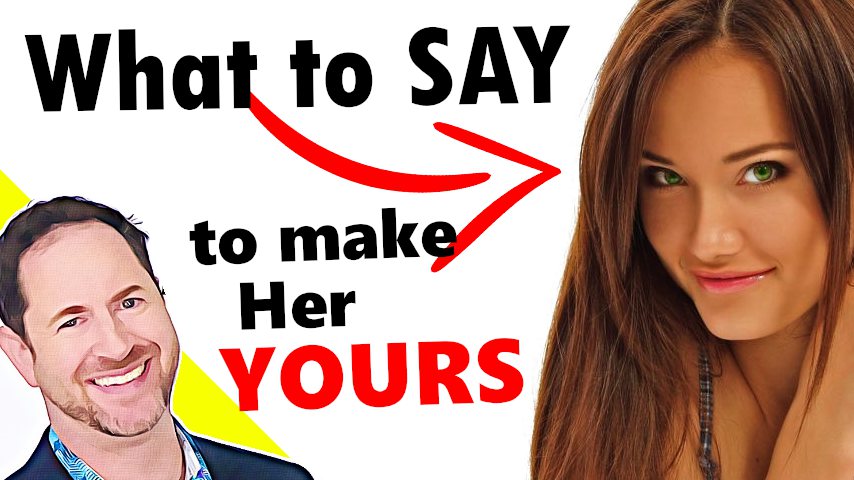 Thousands of years ago, we lived in tribes of small groups of 20 to 100 people.

And yet, if you make your conversation with a girl overly logical, it will come across as boring and uninteresting to her.

But there is a way to make girls hang on to your every word, and to keep talking to a girl to make the conversation going on forever, so that you always know what to say next.

And in this video, I’m going to give you my 5-step formula for having incredible conversations with girls.

And if you’ve ever run out of things to say, or you’ve ever made a girl get bored and want to leave, I know exactly how you feel because that used to happen to me all the time.

And this video is for you if you have trouble talking to girls.

By the end of this video, you’ll view conversation in a whole new light and it will completely change the way you interact with women forever.

So, step number one…first, ask the girl a question.

And it could be any small talk question, logical question, boring question you’d normally think of.

Doesn’t have to be clever or witty.

“So, Suzie, where you do you want to be in three years?”

And she may tell you for example, “Oh, in three years I hope to have moved to Los Angeles and start my modeling career.”

Don’t be like, “Oh my God! That’s amazing. I love that you’re a model! I have a friend that’s a model. We have a commonality!”

Don’t give her an outright agreement.

Avoid anything that sounds too eager or like, “Me too!”

Instead, say, “I can see what you mean.”

It’s just a polite acknowledgement that you understand what she’s said.

Her answer isn’t affecting you.

And she tells you, “I’m from Dallas.”

You simply REPEAT her ideas and feelings back to her.

She tells you for example, “In three years, I hope to have moved to Los Angeles and start my modeling career.”

And now you parrot back what she’s said.

Tell her, “So, you want to move to Los Angeles and get your modeling career going because that will be fun and exciting for you.”

When you repeat her own words back to her, it’s a psychological trick where she feels like she knows you better, and she feels like you truly understand her.

Repeating back her ideas and feelings to her also prompts the girl to keep on talking.

And you say, “Oh, okay. So you’d like to get into modeling.”

And that “parroting” prompts her to keep on speaking, where she might say, “Yeah, because I have a friend who does modeling and she said that I should give it a shot too.”

Another alternative is, “skeptical parroting.”

You’re repeating the last thing she said to you or repeating her feelings and ideas.

But it has a more breaking rapport tone to it where you’re almost skeptical or almost unbelieving of her.

So, she says, “Yeah, I’m thinking of getting into modeling.”

And you say, “Why?! Why do you say that?! You’re thinking of getting into modeling?!”

And now, finally, instead of asking the girl another question, you state an assumption about her.

An assumption is like a flirtatious, mini-cold read. You are taking something you observe, and playfully twist it or exaggerate it.

Alternating seeking rapport with breaking rapport, which is what flirtation is.

So you could say, “So, you’re a model, I can see that mischief in your eyes. I bet you’re a huge troublemaker. My mother warned me to stay away from girls like you. I bet you’ve driven all your old boyfriends crazy.”

So I’m going to give you a full example.

First, start with the question.

Ask her, “Tell me Suzie, what made you want to be a teacher?”

Step 3. Repeat the ideas or feelings back to her. “I can see that you love children. You seem like that kind of person.”

That will build connection with her and will usually prompt her to keep talking more.

You can alternatively do skeptical parroting.

“What!? Why!?  I don’t believe it, I never guessed you’d love children so much?”

And she’ll say for example, “Yeah, I love children because they’re so energetic and full of hope. I feel energized around kids.”

And then finally, you will state an assumption about her.

“Yeah Suzie, I bet there are times when you just want to get home, have drink of wine, a bite of chocolate…”

“And just take off all your clothes and slip into a hot bath tub. That’s your guilty pleasure, isn’t it?”

And then, the conversation will continue organically from there, or you can just ask her another question and repeat the whole process.