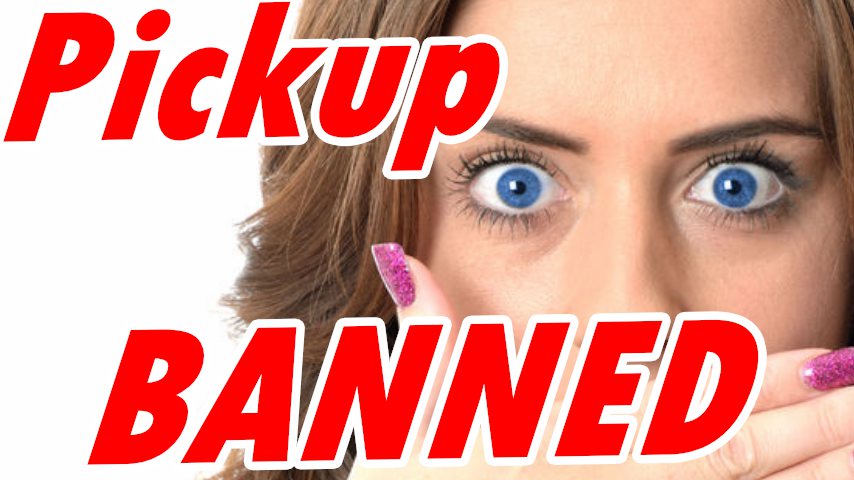 if you want to meet pretty girls, go on more dates, then today is a day to take notice of because Amazon has lately been banning books on picking up girls.

Simply erasing the books from their stores like the books never existed.

When you go to the page, and just see one of those 404 errors, “This page does not exist”.

For example, “Game” was the #1 book in Amazon’s dating category and closing in on the top 500 most popular books on Amazon’s entire book list.

Why is Roosh’s book banned, but THESE books aren’t??

So, it looks like a book that reveals tactics on getting girls is just too controversial for the culture nowadays and need to be banned or at least the executives and Jeff Bezos over at Amazon feel that way.

But wait a second!

Looks like books like “50 Shades of Gray” are fine, which features graphic scenes of sexual abuse. That’s okay apparently with the Amazon execs.

Plenty of books featuring graphic rape are still on there.

The “Turner Diaries,” glorifying race wars and murdering people for their skin color, that’s still up.

Hmmm, but books on teaching a guy how to become more charismatic and get a girlfriend, THAT has to be banned.

What this is evidence of is first: the greater culture is NOT interested in you learning how to get good with women.

What does the capitalist corporate want from you:

Watch Television, play video games, watch their ads, get fat, buy their stuff, shut up, and sit down.

Because then, you are easy to CONTROL.

And those in power, stay safely in power.

Meeting girls, becoming charismatic, becoming your own man, finding happiness and doing outside of buying their crap, that’s a threat.

Those books are so threatening apparently they need to be BANNED.

It’s also a problem with what I tend to see as the corporate left.

This is the part of the “left” that talks the talk of equality and Feminism and identity politics but is firmly entrenched in defending the capitalist corporate power structure.

Like when a fake, phony, scam artist, so-called leftist organization like the Southern Poverty Law Center – which Amazon has a partnership with–pressures the company like Amazon to start banning books to be more politically correct and virtue signal, what happens?

When you start banning books, men that might otherwise be attracted to liberal ideas, now move in the opposite direction.

And I call them the “fake left” because back when I was in the college back in 1990s, the leftist groups were focused on economic issues.

Increasing the minimum wage to a living wage.

Putting dollars back into hard-working people’s pockets with the idea of increasing demand.

Because when you strengthen the middle class, the economy grows, too.

If you want to win working class men to your side, that’s how you do it.

Focus on the bread-and-butter issues of economics.

But now, coming up in 2020, you have this “new left,” which like the Southern Poverty Law Center, which is little more than extension of big corporate capitalist America, virtue signaling and identity politics that thinks it’s crusade now is go on book burning missions to show how virtuous they are.

That isn’t going to win anyone over to your side.

It’s just going to polarize men who now think they’re under attack… and turn guys into the arms of the alt-right.

And furthermore, to show how stupid this move is by Amazon, it doesn’t stop guys from reading these books.

When something gets banned, it just makes people more CURIOUS.

When a father tells his daughter, “You can’t date that guy. He’s the bad boy.”

A banned book, a book on picking up girls that is SO damn controversial it has to be BANNED by direct order of Jeff Bezos himself is now a *dangerous* book.

You can still buy it directly.

It’s going to be passed around among friends.

People aren’t going to stop from reading it.

Look! Amazon should not go down this road of selectively banning books.

It radicalizes people to the right.

They look bad doing it.

And the left and liberals – real leftist and liberals – should not put with this shit behavior of banning books because it just paints the whole movement of the leftists and liberals as stifling authoritarians with the same brush.

My Review of the book “Game” by Roosh

So, are you curious about this banned book – banned. Sorry, I still I’m having a hard time believing Jeff Bezos felt it had to be BANNED, which I have been reading on my Kindle for a few days now.

I do recommend you check out this banned book “Game.”

It’s almost 400 pages and covers your look, your style, your attitude and your beliefs, your mentality that gets you success, as well as action steps you need to be taking, different openers, conversation examples…

How to get a girl over to your place…

How to pick an ideal city and country if you’re interested in traveling and meeting more exotic women.

But also how to navigate a brave new world of dating, marked by dating apps and smart phones.

So, I’m leaving a link down in the description below.

I think it’s $13 dollars right now. There’s an idea version if you don’t like to read.

And if you order it in a bundle of books, the price drops down to $2 for each of the banned books.

So definitely worth checking out.

All right, now I’m going to read a story from the author’s website, Roosh V, and I think this illustrates why pickup knowledge and having game is so important in today’s culture.

I remember an experience from 2014 that is now becoming the norm.

I was living in Odessa, Ukraine, a pleasant seaside metropolis by the Black Sea.

One night, I went to a hipster bar with my friends and approached a short brunette.

I talked to her for a few minutes but didn’t get a positive vibe.

I noticed, however, that her blonde friend kept staring at me.

The blonde squeezed out her friend and started asking me questions.

I gave her my attention.

She was Ukrainian but lived in Italy where she was trying to make it as a “model.”

I immediately suspected that she preferred men who were darker and swarthy.

I had drinks with her, danced for a couple songs, and made sure that her friend didn’t get too bored.

I kept the conversation light and fun, and when there was a silence.

I used that as an opportunity to increase the feeling of intimacy by sustaining eye contact.

After a couple of hours, when the bar began to empty, I invited her to my apartment that was “only five minutes away.”

She came, I opened a bottle of wine, and shortly after, we had sex.

This story may seem basic, but game was used every step of the way.

I put myself in a position to meet a girl by doing an approach.

I remained aware and flexible to focus on the right girl who likes my look and vibe.

I carried on a fun conversation without making things weird or awkward.

and I venue-changed to a home that was nearby.

Does this happen to me every day?

No, but by being prepared to work and spit the right game with the best logistics, “good luck” happens to me more often than other men.

The story now gets a little weird.

I started dating her, seeing her about two times a week.

She had no job besides occasional modeling gigs, yet she was partying like a rock star at fancy clubs and traveling to expensive destinations around the world.

She even bragged that she knew Italian footballers.

While she hadn’t been to Dubai, I was certain she was accepting money from men in exchange for sex or other privileges.

She had an “ex-boyfriend” in town that I now believe she was still seeing.

And here’s the kicker: she wasn’t that hot.

She wasn’t even that hot of a girl.

Sure, her modeling photos looked sexy.

But her beauty was so average that I initially passed on her to go for her brunette friend that first night in the bar.

So here you have a girl with mild beauty who is living it up in multiple cities, has rich foreign suitors, has an ex-boyfriend who still gives her attention, hardly has to work, is popular on social networking, and now has a new man in her life who satisfies her need for novelty.

Does she not sound like an American girl who lives in New York City?

Or a British girl who lives in London?

Or a Canadian girl who lives in Toronto?

This type of attractive girl is becoming the default standard.

I did not try to make her my girlfriend or experience deep love with her because I believe a girl must have solid values to be worth a relationship.

But did I greatly enjoy our casual sex and intimacy for the time it lasted? Yes.

And I’d rather have these experiences than not.

For me and most men, having sex with a pretty girl, in a way that comes with modest costs or drama, is far more enjoyable than going without any sex at all.

I happily took a break while seeing her and then dived back into game after I left Odessa.

So, there you go.

And there’s more millionaire men than ever that have no game but can essentially want to PAY these girls to date them or be around them.

And you now have the worldwide Internet that can bring these average looking girls to these wealthy men that pay the women to stand next to them.

That’s why in today’s modern age, you need to start with Game.

Dating Is Worse for Men Now?? (+ How to Clean Up Girls)