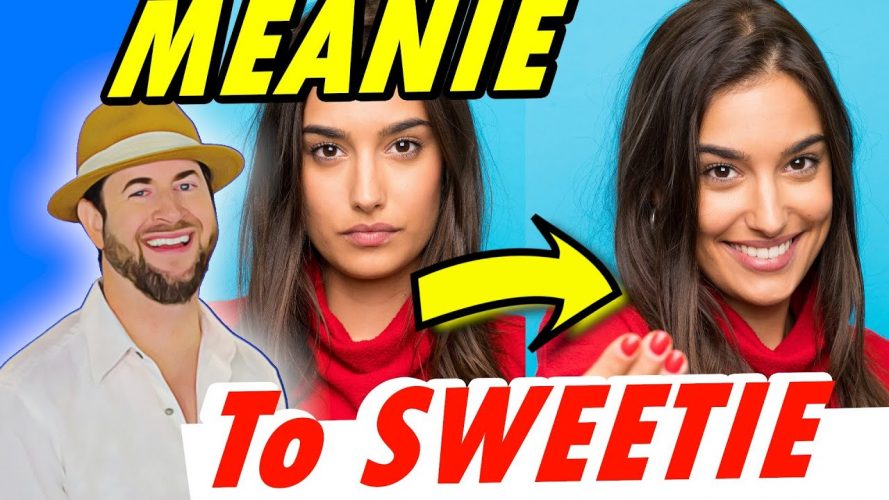 For example, maybe you crack a little joke, something you find funny and she just stands there stone-faced, and she tells you, “You are weird.”

Or maybe you tell her a little story, something you find amusing and she tells you, “Oh, my gosh! You are terrible!”

Or maybe you’re asking some questions about her and she just tells you, “Why are you asking me so many questions?”

Or perhaps you do a little bit of push-pull with her. You tell her, “I like your hair, but I’m used to girls with hair a little bit longer than that. “ She tells you, “Why did you say that? I can’t believe you just said that to me?”

You know maybe she’s just giving you a test. She just wants to see how you’re going to react or maybe unconsciously, she’s steering that conversation in an overly serious direction to derail it.

But whatever the reason, she’s giving you that pushback.

In this video, I’m going to give you some easy to remember lines you can use on any girl in any scenario no matter what she’s telling you, whether it’s, “You’re weird,” or she says, “You are terrible.” Or she asks you, “Why are you asking me so many questions?” or  she says to you, “Why did you say that to me?” or she just rolls her eyes at you and can’t believe you did that.

Just say one of these simple little lines to a girl and she’s going to forget all about it. You’re going to turn it around, and she’ll like you even more. But guys tend to handle this all wrong.

Their first natural instinct especially if it’s a really pretty girl is to apologize to her. “Oh, I’m so sorry for saying that. I didn’t mean to do it. You’re right. I was really out of line. I’m so, so sorry.”

Or they assume that the girl isn’t interested in them and they just eject from the set with their tail between their legs like a sad dog. Either way, that’s reacting to the girl. The girl is setting the frame Her frame is you are in the wrong, you shouldn’t have said that, and you’re buying into it hook line and sinker.

You agree with her and you leave or you apologize and that’s not a good solution. It doesn’t scream sexiness to the girl. it’s not going to increase your attraction for you.

Of course there’s always exceptions. There’s some cases where it might make sense to apologize to the girl like if she gets beet red out of anger and she’s got the steam coming out of her ears.

For example, say she’s Mexican and you make a racial joke about Hispanics and she gets really pissed off you could tell her, “Look, I’m sorry girl. I don’t care about that. I just wanted to see what you’d say. See? Aren’t you glad you married me?” And you quickly move on.

But unless you accidentally personally insulted her and she’s furiously angry, typically apologizing is not the best way to go.

For example, if you’re telling her about how you like to read comic books and she tells you, “You’re weird.” You don’t want to apologize her that you like reading comic books because that’s apologizing for who you are as a person.

Second big mistake we men make and this is even worse than apologizing is letting the conversation get overly serious where you let that get to you and you get serious back with the girl.

Do not tell her, “What’s wrong with you, girl? What’s the big deal? Why are you being such a cunt, because if you get serious back, conversation is essentially over at that point and there’s just women out there they’re going to steer the conversation in that direction to try to make it serious, to try to derail the conversation as a kind of test to see how you’re going to react.

So the first little line you can say to a girl in most any of these situations that smooth things over real nice and well is, “It makes it better.”

The girl tells you, “Why aren’t you drinking? Why don’t you have a drink in your hand? What’s wrong with you?”

You simply tell her makes it better. You can even look her directly dead in the eyes, tilt your head back to the side and a cocky, confident kind of way, break out a little smile across your face, make her smile back, and then you tell her, “It makes it better.”

Or the girl takes a look at your shirt and she says, “I don’t like your shirt. It’s kind of ugly.” You just look her right in the eye, tilt your head back, cocky, confident, break out a smile, try to make her smile back with a pause, and then say, “It makes it better.”

Looking at that girl dead in the eyes, tilting your head back cocky and confident breaking a smile across your face to make her smile back right there, that breaks her frame. You’re getting inside our head and then saying, “It makes it better.”

Another real simple line you can use when a girl says something kind of negative to you, like imagine you’re talking to a girl and she tells you, “You’re kind of short. You’re shorter than most guys I date.”

To elaborate on that, you can look her in the eye, tilt your head back, cocky confident break out into a smile, get her to smile back and you say, “Uh-huh, yeah very.”

Or perhaps the girl tells you, “I can’t believe you just said that. Do you really think that’s funny?”

You can just tilt your head back, look her directly in the eye, break out a smile, get her to smile back if you can and say, “Uh-huh. Yeah, very.”

If you can make her smile back by looking in her eyes and breaking out a smile, you’re smashing her frame that you are the one who did something wrong. That’s her frame and you’re setting a new frame where she’s just got a smile back. And anyway, you’re not reacting. You’re just saying, “Yes, very.

Another great line that works like gangbusters is, “So does that make me a bad man?”

The girl says to you, “Were you just checking out that girl’s ass?”

And you simply tell her, “Uh-huh, so does that make me a bad man?”

Or perhaps the girl says to you, “Oh, I can’t believe you just said that.”

And you look right in the eye. You hold eye contact. You tilt your head back. You crack into a smile, try to get her to smile back that’s breaking your frame and you tell her, “So does that make me a bad man?”

You’re being unreactive. You’re smashing her frame. You’re staying playful, just got a little of that sexual bad boy vibe to it.

“Yes, I’m being a bad guy. I’m a little bit bad dude, the naughty guy, the sexually naughty guy. I just do what I like. I’m the rebel.”

The next response you can use isn’t even a line. You can just do it non-verbally. You don’t even have to say anything. You just accept it, let it roll over you. Shrug and you give her a grin.

Imagine the girl tells you, “I don’t like that hat. Why are you wearing a hat? It’s weird.” You just shrug and you grin.

Or the girl tells you, “Why do you say that? You naughty boy? Why do you say?” You just shrug, and you grin. You accept it. Then you talk about something else. You move on.

Because your remaining playful, because you are being unreactive, you’re not accepting her frame, you’re not reacting to it in any way, there’s nothing for her to really grab on to. She can’t get angry at you. You remain likable. You move on and she’ll just instantly forget about it. You passed her test, so there you go. It’s real simple.

You just got to remember you don’t want to react to the girl by apologizing profusely or thinking she doesn’t like you and just leave in the set with your tail between the legs like you’re a sad dog or react by letting the conversation get serious, letting her derail the conversation in a serious direction where you get angry yourself, where you get pissed off and you start fighting with her or you start logically arguing with her.

Don’t let those two things happen. All you got to do instead is remember one of these simple lines, “It makes it better,” or, “Uh-huh, yes very,” or, “Does that make me a bad man.” Or you just shrug, accept it and grin. You can combine that with eye contact tilting your head back in a cocky manner, breaking out a smile, getting her to smile back. That breaks her frame as well.

Just do one of those to defuse the tension and the result is the girl’s going to very quickly forget about it and she’s going to like you even more because of the way you handled it.