“Is that realistic? What do you recommend?”

“Hey, Jesse. I’m 52 years old and I’d like to date a younger woman. What’s your best single tip for me?”

All right, all right, in this video I’m going to give you my #1 tip for dating much younger women…

Or you say you want to date women in their 30s and you’re in your 60s.

It can be done!

Perhaps change the whole direction of your life and start dating those girls most men wouldn’t even dare to try.

All right so my #1 tip to dating far younger girls is this:

There’s a lot of negative social pressure and shaming from society from men, from women about dating a far younger girl.

Older women will jump at the chance to shame you and stop you.

Because you’re taking yourself, an eligible bachelor, off the market to them.

And when other men see you dating a younger girl, those other men might see, “Ah! That’s possible!”

Now they get the idea too.

That decreases HER sexual market value.

And she’ll see it as righteous morality. Escorts analogy

Now there’s actually a whole slew of good reasons NOT to pay for escorts.

If a man can simply pay for sex and the sex is easily available, suddenly the price of the woman’s vagina falls.

Men aren’t as sexually needy and thirsty anymore and they’re not going to try as hard to win her over.

Why buy her a house and devote everything to her when you can get laid real cheap just down the street?

So for that reason, women generally despise prostitution.

In the same way that women hate the idea of you, as an older man, dating younger women.

She perceives both as a threat.

And with some women they feel so threatened, it’s almost like a death threat to them.

And you see that reflected in the culture.

Like these big box office movies in the cinema, studio executives want to bring in as many people to the theater as possible…

So they the film politically correct in a ways you may not even notice.

For example, in the first Thor movie, Thor’s girlfriend, Natalie Portman was, at the time, 30 years old.

In the Superman film “Man of Steel,” Superman’s girlfriend played by Amy Adams was at the time 40 years old.

But it makes sense in terms of selling movie ticket.

Play it real safe and gets women into the theater.

Because Superman is a “good guy” and doesn’t represent a threat to her sexual market value in any way.

In fact, whenever you see a big budget movie, the girlfriend is almost always the same age as her boyfriend…

To play it safe, to not ruffle any feathers.

You see this in media over and over again, and it becomes cultural conditioning that you just expect super high-status men to date older women and that’s accepted as the norm, and what you should do.

So when you decide to date far younger women, you’re going to be shamed…

Heavily shamed by other women.

But you’ve got to remember, women are looking out for THEIR own sexual self-interests.

What do women care about YOUR genetic self-interests?

Women are looking out for themselves, which means squashing right away whatever idea you have about dating a younger woman.

Now I mentioned there is ONE group that WANTS you to date younger women and will be your ALLY to make it happen.

It’s funny, too, because which women will NOT shame you about dating a younger woman?

There is one group that’s cool with it.

Assuming you’re an older guy that has taken care of himself, younger women are cool with it.

Heck, to a younger woman, it’s just more attention for herself.

Every woman wants to be the center of male attention.

Every woman wants to have all the world adore her.

She’s a young lady and there’s this cool, attractive older man who has taken an interest in her that’s great for her.

More validation if nothing else.

She’s cool with it. She doesn’t care.

So surprisingly, the ONE group of women that IS cool with you dating much younger women…

Are the younger women themselves?

In fact, look at this paradox.

Let’s say a woman is 30 years old. She’s now in that age where her sexual marketplace value is declining.

Her carefree partying days are coming to a fast close because guys don’t pay her the same interest they used to.

Suddenly she sees the writing on the wall, and she wants to get married and maybe have kids.

She’s feeling that pressure. The pressure is on.

She’s 30 years old. There’s a successful man she works with who is 35 years old who is dating a 23 year-old younger woman.

But he’s been taken off the market. She’s going to HATE that.

She’ll more than wag her finger at him. He’s a disgusting pervert.

But watch this, this is the paradox.

Now say a far older, handsome, fit, suave gentlemen who is 45 years old, suddenly takes an interest in HER…

Starts flirting with her…

Well, she’s be perfectly fine with THAT.

Even if she doesn’t go for the older guy ultimately, she likes the attention at least.

So typically, a woman in one breath will shame and judge the older guy chasing a younger girl…

And then a moment later be perfectly loving the attention of an older guy herself.

Just depending if it benefits her personally or not.

Women will shame other women and they’ll shame you for dating or chasing far younger women.

But when a cool older guy hits on her, well then…

Suddenly, all of a sudden, it magically becomes cool with her.

And both men and women, we all do this.

And we HATE it when the sexual marketplace tilts AWAY from our favor.

Men do it too

Driving the hot-red sports car paid by Dad and he’s dating some models.

Other men shame him for being a douchebag.

We shame him for having a small pecker and trying to compensate for it.

Likewise, men will shame pickup because they feel that’s a threat.

Right or wrong, we human beings, we always want to tilt the sexual marketplace in OUR favor…our personal favor.

We just shame and judge different groups of people for different reasons with different criteria of morality.

But we all do it.

So, if you want to date younger women…

It’s not going to happen…

Unless you yourself are 100 percent embracing it.

That it’s awesome, even noble.

And you’re going to expect many women, most women, and other men too…

Are going to try to HATE you for it?

Society and the media will try to shame you for it and judge you for it.

Even other guys that want to date younger women themselves might not be cool with you going after younger girls because, well, you’re just more competition for THEM.

Ironically, the group most okay with you dating younger girls are going to be…

The younger girls themselves where they have a sexual marketplace interest in you being interested in them.

So, if you want to date younger women, you’ve got to be okay with being a bit of a pariah in society. You just have to be chill and cool with the fact that.

Most people aren’t going to like you for it and you can’t get mad or butthurt about that.

Or date much younger women.

It’s not both though. You got to choose one or the other.

So, what are you going to do

So my question to you now is:

If you make the choice… can you free yourself from the social conditioning.

Can you embrace that identity of being a man that talks to and flirts with and dates much younger women?

Will you be cool with being that kind of man?

Will you embrace the fact that most other people will dislike you for it.

And you’re cool and relaxed and accepting about that.

And not in your interests.

Can you really free yourself from that cultural and societal conditioning where, yeah on the surface, you’re cool with dating a younger girl…

But deep down, maybe you still think it’s not “you.”

Deep down, maybe, you’re still think younger women would never be interested in an older guy.

Society shames a lot and maybe deep down, you still feel the shame.

On one level you’re like, “Fuck society and what they think! I can date a younger girl.”

But on a deeper level, you still hold back. You still feel OFF about it.

How limiting beliefs stop you

If you see a younger girl you want to talk to and flirt with, are you going to feel “wrong” or you feel slight “shame” or you feel “awkward?”

Those limited beliefs just beneath the surface will prevent you from ever approaching or talking with her.

And even if you do muster up the balls to say “hello,” then you come across as nervous or way too “nice guy”…

Or you hold back, filtering everything you say, and act too conservatively.

And the interaction stalls at “friend to friend” or approval seeking, lacking any real sexual tension.

That’s usually what happens to men because they still buy into the cultural conditioning.

They never date younger women because they feel judged.

And they judge themselves. They feel underserving and awkward about it.

They get nowhere with younger girls. That’s why 99% of older gentlemen will NEVER date a younger girl.

Because the societal shaming is extremely effective and most guys can’t really get passed it.

They prefer to be liked by everyone rather than ruffle a few feathers and go for what they really want.

So that’s my tip:

If you want to date much younger women, you’ve got to EMBRACE it. Fully!

No half-assing it, wanting younger girls, but also wanting everyone to like you and trying to have one foot in both worlds. 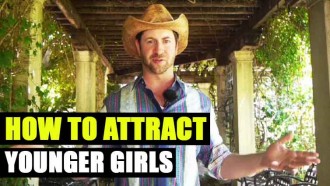 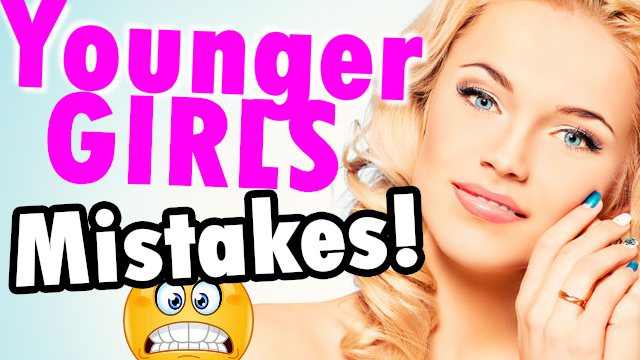 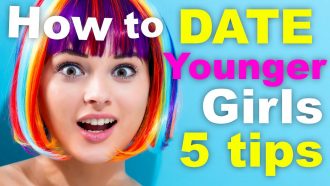